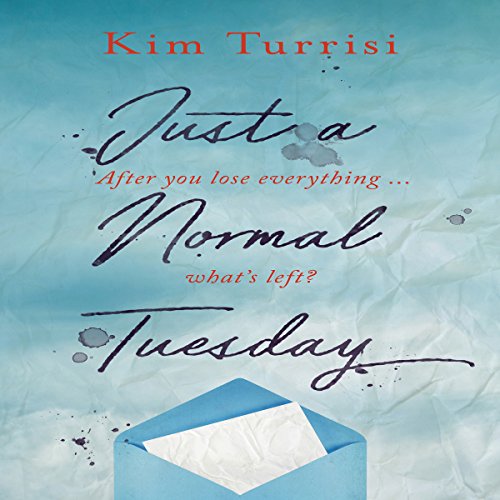 What begins as just a normal Tuesday becomes a day that will shatter 16-year-old Kai's life forever. All it takes is a letter, tucked into a pile of their family's mail. It's from Kai's older sister, Jen, who lives nearby. And it begins, “If you are reading this, I am already gone”. Jen has committed suicide.

Dazed, Kai helps to plan Jen's funeral and tries to cope with their devastated parents, all the while searching for answers. How could Jen do this, and why? Kai is heartbroken and furious, and soon she's caught in a vicious downward spiral, self-medicating, and lashing out at the people she loves. That's when her parents shock her: They're sending her to the Tree House, a summer camp for grieving teens.

Kai is not a happy camper at first. But when she meets other kids who are grappling with loss, she begins to share her feelings, find a way forward, even laugh...and fall in love.

Just a Normal Tuesday offers a road map for anyone who has been touched by loss and anyone who is looking for hope in a broken world.

Author Kim Turrisi won a Daytime Emmy for her work as co-creator, executive producer and writer of Venice: The Series. Kim also wrote for ABC Family's webisode series Pretty Dirty Secrets, an online companion to Pretty Little Liars. This is her first novel.

"...an honest, and gut-wrenching story of death, grief, and healing." ( CM Magazine)
" Just a Normal Tuesday is raw, real, and absolutely beautiful. It's a rare book that can make you cry, laugh, swoon, and cheer. I loved this wholeheartedly and never wanted it to end." (Veronica Rossi, New York Times best-selling author of Under the Never Sky)

What listeners say about Just a Normal Tuesday

There was so much potential in this story about a teenager having to deal with her sister's sudden suicide. And yet the author spends very little time details the emotional state. Yes certain events are depicted but as I read I found myself thinking this was more a romance thinly veiled as a novel about dealing with loss.

It did not help that the main protagonist is just not believable. The secondary characters are more interesting. Most disturbing is the author's implied plot device that the female lead can only find peace in the arms of the male lead.

There are shining moments but instead of making the most out of these opportunities the author prefers for us to believe in the romance line. It was disappointing.