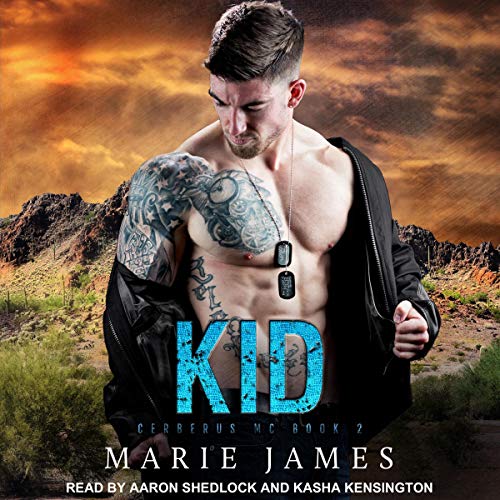 Khloe: When Khloe Devaro's best friend and fiance is lost to the war in Iraq, she's beyond distraught. Her intentions of joining him in the afterlife are thwarted by a Cerberus Motorcycle Club member. Too young to do anything on her own, the only alternative she has now is to take Kid up on his offer to stay at the MC clubhouse. As if that's not a disaster waiting to happen, but anything is better than returning to the foster home she's been forced to live in the last three years.

"Kid": Dustin "Kid" Andrews spent four years as a Marine, learning how to survive the most horrendous of conditions. He never imagined that holding a BBQ fundraiser for a local fallen soldier would end up as the catalyst that turns his world upside down. Resisting his attraction for a girl he's not even certain is of legal age was easy, until he's forced to intervene when her intentions become clear. All his training is wasted as far as he's concerned, since none of that will help him when it comes to Khloe.

Will the self-proclaimed man-whore sleep with a woman in every country he visits as planned, or will the beautiful, feisty girl living down the hall throw a wrench in his plan?

What listeners say about Kid

this book gave all the feels from anger to sadness to happy. It was a great addition to the series with superb narration! I highly recommend this book/series!!

I loved this book. Finished in 2 Days!! Amazing writer. Keep up the good job.

I'm not really sure what I feel about this book. On the one hand, the story is captivating and well written. You easily get sucked in and overall, I enjoyed the plot. On the other hand, the girl is a kid. She's only 17 when they start their relationship and it rubs me the wrong way. Sure, Kid wants to wait but still. I find myself feeling kind of icky reading his thoughts about her. Just a heads up, as this might be triggering for some!

I was pulled into this book right from the get go, which is where I stayed until I had read every single word that was written all the while I had it playing out in my head like a little mini movie.
There are twists, turns and surprises through out this book. Some of the surprises you may see coming and others you might not, some of the surprises are large, while others are small, but each and everyone has equal importance in the book and help to make the book the fantastic read that it is.
I went on a bit of an emotional rollercoaster ride with this book, I did cry, so if you are anything like me you might want to have your tissues available to be on the safe side. Each and every emotion that the characters go through can be felt and some will even pull on your heart strings. I went through the emotions with the characters. For me personally if I go through what the characters are going through, I usually enjoy the book better.
There was a time or two I wanted to reach into the book and smack a couple of the characters, but they redeemed themselves.
I loved every single word that was written about this book.
I highly recommend this book, this series and this author. If you haven't read anything by Marie James you are missing out on a wonderful experience.