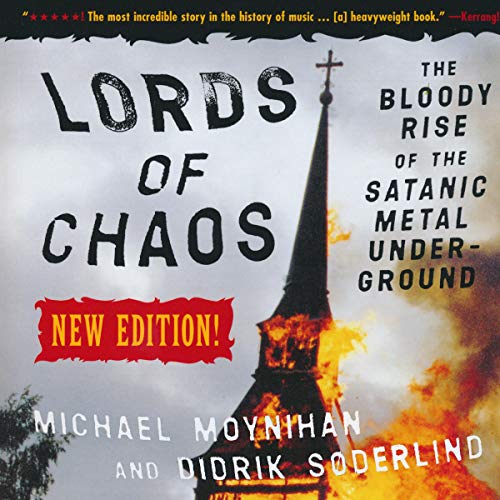 “The most incredible story in the history of music...a heavyweight book.” (Kerrang!)

“An unusual combination of true crime journalism, rock and roll reporting and underground obsessiveness, Lords of Chaos turns into one of the more fascinating reads in a long time.” (The Denver Post)

Lords of Chaos focuses on the scene surrounding the extreme heavy metal subgenre black metal in Norway in the early 1990s, with a focus on the string of church burnings and murders that occurred in the country around 1993. A narrative feature film based on this award-winning book has just gone into production.

“The most incredible story in the history of music...a heavyweight book.” (Kerrang!)

“An unusual combination of true crime journalism, rock and roll reporting and underground obsessiveness, Lords of Chaos turns into one of the more fascinating reads in a long time.” (The Denver Post)

What listeners say about Lords of Chaos

A fear mongering book focused on showing scary how the underground black metal scene is.

Focus' on the worst aspects on the genre rather than what joy it can bring. Focus' on the politics and not the music itself.

Totally misrepresents Fenriz as a person. Go watch some videos on youtube and you will get a better idea what he is about.

I'm endlessly fascinated with the core story of the original Norwegian scene. I'll also say I thought the movie "inspired" by this book did an excellent job finding a relatable, human angle to follow (though I'm sure scene purists probably hate it). Having said that, this book reaches a point where it gets tiresome. The writers state up front they don't feel the need to step in and balance the discourse. The result is long stretches of interviews that are basically Nazis complaining about political correctness, with little or no follow-up questions or serious probing. There is one stretch of Varg Vikernes interviews that seems endless, in which Vikernes goes on a long-winded aryan nationalist rant. It feels like you're being yelled at by a crazy person on the street who won't leave you alone, and all you want to do is get your groceries to the car. The interviewer does little to dig into the reasons why Varg became a crazy Nazi asshole. They seem to think it best to let him talk, and it's often not enjoyable to listen to. And I'm not saying that just because I disagree with his politics. I mean it actually becomes boring. Having said that, if you are into niche music subcultures like I am you will definitely find this book compelling.

A pretty big look at a small metal genre...

The first half of this piece is very informative about the inspirations that were blended together to create the Black Metal genre as well as the crimes committed as a result of the commitment to the ideology of the scene. After that, it gets very in-depth on the ideology which can be a bit monotonous. The constant refrains along the lines of "we want evil, eliminate the Christian blight, we hate everyone, Varg is great/Varg's an idiot, Euronymous was a traitor, paganism, scorched earth for the Christians, blah blah" tends to be repeated a lot in the interview sections. Eventually, the book moves back to center and takes a look at Black Metal fanzine journos and other genre acts besides the ones that are considered Black Metal's 'beloved'.

As this is a non-fiction work, it suffers from that NPR-sounding sameness that may cause you to want to give up if you're not totally dedicated to learning what the Black Metal scene is, at least from the standpoints presented, and what powers it. A voice like that is best taken in segments. Despite some mispronunciations, he's a good narrator. The voice is what it is. YMMV.

In closing, I really can't tell if these musicians are insanely brilliant or brilliantly insane. I remember being a early-20-something and wanting to rage at the world for life not turning out like I thought it was supposed to, but I never gave one rip about any religion or paganism or any of what they seem to be into. I'm sure that's because I'm not Norwegian or Scandinavian, etc... I wrote my songs and played in my bands and worked out the frustrations. In an interview I did with the late Peter Steele of Type O Negative, he called the act of playing music "sonic therapy". I guess while I got over my issues, the Black Metal musicians keep their motivations burning hot from it.

I remember reading about Dead's murder years ago and, thanks to the movie which I haven't yet seen, was inspired to pick up this audiobook. Now that I've finished it, I went on iTunes to check out the music, all of which reminds me of going to the local hole-in-the-wall all ages indie club on "new band night" and seeing some group of pimply-faced kids beat the everlovin' hell out of their chosen instruments while the vocalist screams/wails/barks into the often-dropped microphone for three minutes at a time to the adulation of their ten or twelve friends who have to be home by 11pm. Art truly is where you find it.

Very Interesting, but Not Really About the Music

I picked up this book on a recommendation, expecting it to be all about the music scene of early Norwegian black metal. While there's certainly a lot of that at the beginning, the focus of the book seems to be more about the ideological and political motivations of characters in the scene. It delves super deeply into sociology, politics, and religion. I was interested the entire time and the performer is great. It's really a very entertaining book, I just want people to understand the contents before they pick it up.

A lot of people complain about this book. But as a black Metaler I love it. It offers a great look at early Black Metal. Is it biased? Probably, but its use of interviews and first hand accounts really helps to back up a lot of the positions presented in this book.
Black Metal has been marred by the violence of the late 80s and early 90s, but despite all of it, I really feel that this book is a great, true crime, approach to the stories of both Mayhem and Absurd.

If you buy this book, I recommend that you also get the hard copy for the imagery. Also, please keep in mind that the violence of the past does not reflect the music of the present.

Author spent entirely too much time expounding on Varg Vickernes of Burzum in particular and entirely too little on other subjects and individuals. At times it felt like I was reading a biography on him, or the transcript of a speech by him, there was just that much focus on him, his life and his interviews with the author. Now I do understand he played a large role in the early Norwegian scene criminal events, but this book almost gave the impression that it all had to do with him to the exclusion of others. There are some interesting and valuable points about other bands and members especially in the first quarter to half of the book though.

Flawed but worth it

Feels for a good portion of the book like listening to a guidance counselor talk to you about the history of black metal, but in that it is a least very thorough and I feel I learned quite a bit

Very entertaining are the bad reviews defending some of these bands as being “good guys” (just watch an interview, man!) while I very much enjoy black metal I accept that many of its founders had less then desirable views on the world.

Entertaining though meandering in spots

Half the book is about what it portends to be about, while a quarter of it is a psychoanalysis of Varg and another quarter is about various political & philosophical ideologies of various musicians, which sometimes is interesting enough, though; also seems like irelevant filler.

started off great, then the last half feels a bit like a long tangent, but wasn't bad at all. hard to put down.

Not for the faint hearted

The Narrator does an excellent job of reading and the book itself provides a really good insight to the mindset of black metal artists. Thee film was quite good too

Excellent narration. A must listen for anyone who has an interest in Black Metal. Shame the movie based on the book was terrible.

A compelling trip through not only black metal and it's rise but nationalism also.

Listened to it three times this year

The Audiobook lacks the imagery of the book, however, it's the characters and the interviews of the people in the Black Metal scene that make this audio book so intriguing. From Venom and Bathory to Mayhem, Darkthrone, Emperor and Burzum, the bands, or more specifically the members stories, almost seem like fiction. The book itself documents a strange era in an ambiguous genre of music. Various members of various black metal bands portray their odd wisdoms, dangerously teetering mental states and gloomy outlooks on life. From start to finish, the minds of the Black metalers hook you and reel you in with stories of bickering, betrayal and murder.