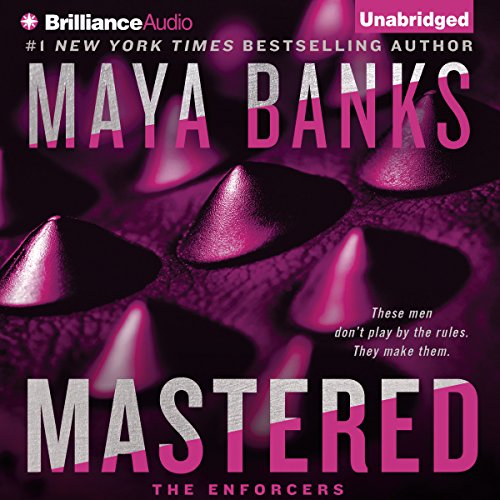 What he wants, he takes with no remorse or guilt.

She stood out in his club like a gem, unspoiled and untouched. A lamb among wolves, she clearly didn't belong. Drawn to her innocence he watched as she was surrounded by men who saw what he did - but no one but him could touch her. He summoned her to his private quarters. He sensed her fear. He also recognized the desire in her eyes. And he knew she wouldn't leave before he possessed her. She had no need to know his secrets. Not until he had her under his complete and utter control.

What he wants, she isn't sure she can give him.

The moment he told her want he wanted, she couldn't resist. Instinct told her to run, but her heart said stay and walk the fine line between pleasure and pain. Though she wasn't sure she could ever completely surrender, the primal part of her wanted to try, even knowing this man could break her in ways she never imagined. Because once he possessed her, he owned her and it would be too late to turn back. She can only pray that he doesn't destroy her in the end.

The characters have a lot of potential, but there is no development. The fast jump to relationship conflicts with what the characters themselves say. The male voice is fine, but his attempt at a female southern voice comes off as a parody, and makes them sound simpering and whiney.

Would you ever listen to anything by Maya Banks again?

I have liked other books by her much more!

NO - there is no resolution and the characters constantly contradict themselves.

Didn't realize this book ends with a huge cliffhanger. Be prepared for dissappointment.

Would you try another book from Maya Banks and/or Jeremy York?

This is a teenage fantasy of a poor waitress being swept off her feet by a rich man. Which would be fine, but she is a dumb, whiny girl and he falls in love with her and wires money to her family, moves her to his house and buys her new wardrobe within 48 hours of meeting her....poof, life is great and she keeps whining. I can't even listen to this crap. Save your credit and buy a realistic, believable fantasy.

I couldn't get past the narrators voice first of all. Especially when he narrated the female. So corny...And the story was so repetitive. If I heard once I heard a million times how this woman was different than no other and that Drake was angry. I was mocking it in my car. I couldn't even finish it. I like Maya Banks Highlander books but this was my first and possible my last modern story from her. Sadly this is a thumbs down!

Omg! Omg! Omg! I don't think anything can be worse

Does Evangeline have to be such a doormat. She has absolutely NO PRIDE or self worth.

And why is book so long. Horrible storyline, too many side conversation, and no substance. I have read many books by maya banks, this is not her best work.

The narrator was great as the male voices however horrible as the female one. Especially Evangeline's. It sounded like a southern older women named Betty. It was bad.

I don't recommend this one.

What about your friends?

The weak, whiny female character and her story of woe. How many times was she going to whine about never having love, never having money and being oh so unattractive? Being a submissive doesn't necessarily mean a woman is helpless with almost zero self esteem.

What could Maya Banks have done to make this a more enjoyable book for you?

Give the girl some self esteem and direction in life. It also would've been great to hear some of Drake's history.

Did Mastered inspire you to do anything?

I've heard Myra Banks stories were entertaining but this one left me unfulfilled. This story did have potential which is why I think I'll try another one of her series.

The author could have, you know, written an entire story rather than abruptly dropping us with a lame excuse note after 13 hours of listening to dangle the "You're only halfway through," carrot. I don't like reading book like that, and if I know ahead of time they are serious cliffhangers, I avoid them until they are all out.

What's going on with Maya Banks? This is the second book in a row from her that has prompted a bad review from me. After 13 hours, we are abruptly dropped with a "note from the author" that even though she doesn't write cliffhangers like this, SURPRISE! She tells us the story is only halfway done and she'll get around to getting the rest of it to us sometime in 2016. Yes, I realize it says "Part 1" and all... but Maya's series books don't follow the cliffhanger formula so I blindly, and eagerly got into it only to be sucker punched and left angry. So the book released prior to this one, Darkest Before Dawn, I felt like it wasn't her writing the story... and here, again, we have another one that doesn't follow her usual style. Is she experimenting? Did she hire someone to help her write? I'm confused. Besides, so much of this story was rather slow and repetitive as it was... what in the world is she going to fill another 13 hours with? I have my guesses, but to avoid plot spoilers, I won't really much else... but if you ARE a reader like me that doesn't like long, extended cliffhangers with no real obvious reason for it? AVOID this book until the next installment is out. I don't think this story needed to be extended out so long.

Found myself rolling my eyes at characters and dialogue. I returned book before finishing. Disappointing.

I did not like the female lead. I actual found myself rolling my eyes through this book, especially during her parts. the narrator didn't improve the story either. his portrayal of the female southern voice made my right eye Twitch.

The bad reviews are off base

Maya Banks has produced another ADULT entertainment story that was hot, moving and enthralling. The complexity of the story was enticing and gut wrenching. Take the plunge. You won't regret it

I love Ms Banks books, however this story has been written at least twice by other authors. I find her male lead not sexy, but cruel, and her female lead is nauseating in her "innocence".
One of my biggest complaints, with Audible, and the publishers summary, is that NO WHERE did it mention that this is book one, of an undetermined number, in a series.

Where does Mastered rank among all the audiobooks you’ve listened to so far?

What other book might you compare Mastered to, and why?

Which character – as performed by Jeremy York – was your favourite?

Not really, it was just a very good story and I am looking forward to the other two in the series

The narrator does a wonderful job, I hope he does the next ones

I have a few of Maya Banks books in my library but I just really really didn't like this book. The story, the female voice is annoying. She comes across sickly sweet and innocent and overly polite. Every male she comes across falls to her "innocent charms".

Their is not enough information given about the lead male role and his background.

I will not be investing in the others of the series.

loved this book the this is certainly a different love story, look forward to the next book in the series

i love Maya Banks books but this book was simply too long and it repeats itself over and over again. I get where Maya was going with this book BUT its so drawn out that it misses the mark.
The narrator was grat for most of the book but his female voice was not bad but not good either.