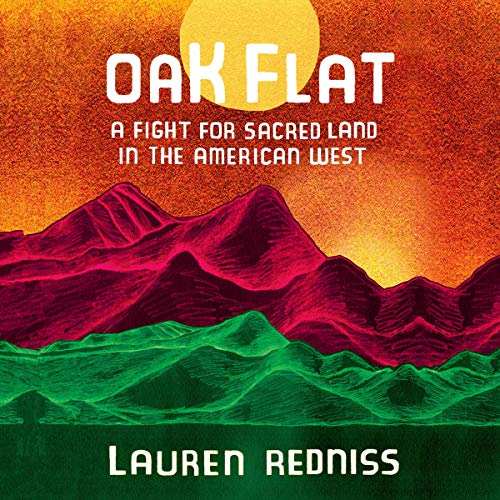 A powerful work of visual nonfiction about three generations of an Apache family struggling to protect sacred land from a multinational mining corporation, by MacArthur "Genius" and National Book Award finalist Lauren Redniss, the acclaimed author of Thunder & Lightning.

Oak Flat is a serene high-elevation mesa that sits above the Southeastern Arizona desert, 15 miles to the west of the San Carlos Apache Indian Reservation. For the San Carlos tribe, Oak Flat is a holy place, an ancient burial ground and religious site where Apache girls celebrate the coming-of-age ritual known as the Sunrise Ceremony. In 1995, a massive untapped copper reserve was discovered nearby. A decade later, a law was passed transferring the area to a private company, whose planned copper mine will wipe Oak Flat off the map - sending its natural springs, petroglyph-covered rocks, and old-growth trees tumbling into a void.

Redniss' deep reporting anchors this mesmerizing human narrative. Oak Flat tells the story of a race-against-time struggle for a swath of American land, which pits one of the poorest communities in the United States against the federal government and two of the world's largest mining conglomerates. The book follows the fortunes of two families with profound connections to the contested site: the Nosies, an Apache family whose teenage daughter is an activist and leader in the Oak Flat fight, and the Gorhams, a mining family whose patriarch was a sheriff in the lawless early days of Arizona statehood.

The still-unresolved Oak Flat conflict is ripped from today’s headlines, but its story resonates with foundational American themes: the saga of westward expansion, the resistance and resilience of Native peoples, and the efforts of profiteers to control the land and unearth treasure beneath it while the lives of individuals hang in the balance.

This audiobook includes a downloadable PDF that contains a selection of original illustrations by the author, which appear in the print book.

"In Oak Flat, Lauren Redniss has produced a supernova: a dazzling blend of deep reporting, sublime illustration, haunting dialogue, and descriptive writing that has the crystalline precision of a prose poem. In conveying the story of the ongoing clash over a patch of southeastern Arizona - site of priceless copper deposits, but also sacred Apache land - Redniss weaves together physics, history, geology, legislative chicanery, intimate portraiture, and tribal custom and culture into a vivid, searing, indelible act of witness." (Patrick Radden Keefe, New York Times best-selling author of Say Nothing)

"Oak Flat left me stunned. History, testimony, art, landscape: Lauren Redniss weaves these elements together to evoke the rock and sand and sky of the Arizona desert, and to bring to life the story of the people for whom that land is sacred. Rarely is a book simultaneously so heartfelt and so brilliant." (David Treuer, New York Times best-selling author of The Heartbeat of Wounded Knee)

"Lauren Redniss' Oak Flat unfolds and unfolds, moving swiftly and seamlessly from the cosmological to the geological to the intimate regions of the human heart. It tackles a painful, important subject with grace, rendering everyone and everything it investigates with uncommon intimacy, curiosity, and dignity." (Maggie Nelson, author of The Argonauts)

What listeners say about Oak Flat