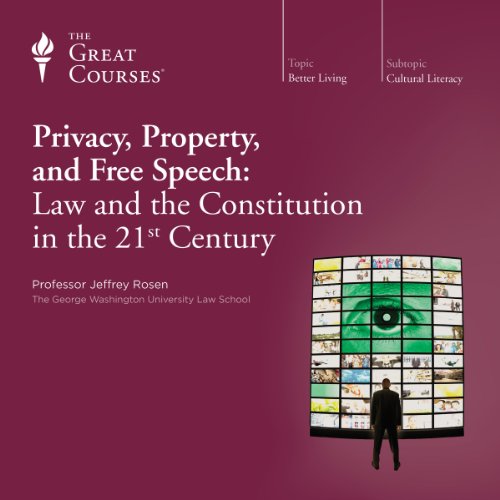 Privacy, Property, and Free Speech: Law and the Constitution in the 21st Century

Although the courts have struggled to balance the interests of individuals, businesses, and law enforcement, the proliferation of intrusive new technologies puts many of our presumed freedoms in legal limbo. For instance, it's not hard to envision a day when websites such as Facebook or Google Maps introduce a feature that allows real-time tracking of anyone you want, based on face-recognition software and ubiquitous live video feeds.

Does this scenario sound like an unconstitutional invasion of privacy? These 24 eye-opening lectures immerse you in the Constitution, the courts, and the post-9/11 Internet era that the designers of our legal system could scarcely have imagined. Professor Rosen explains the most pressing legal issues of the modern day and asks how the framers of the U.S. Constitution and the Bill of Rights would have reacted to aspects of the modern life such as full-body scans, cell phone surveillance, and privacy in cloud servers.

Called "the nation's most widely read and influential legal commentator" by the Los Angeles Times, Professor Rosen is renowned for his ability to bring legal issues alive - to put real faces and human drama behind the technical issues that cloud many legal discussions. Here he asks how you would decide particular cases about liberty and privacy. You'll come away with a more informed opinion about whether modern life gives even the most innocent among us reason to worry.

Useful overview of your rights. Good to know.

I found this quite interesting and useful. It isn't a replacement for a lawyer, but it might help you figure out when your rights are being violated as well as where certain laws come from, their backgrounds and intent, etc. Really good to know. Will definitely listen to a second time around, to pick up details.

Solid set of lectures for lawyers and laypeople

Timely and important set of lectures. Though I was familiar with a good deal of the law covered (especially later, as it came to free speech), I had not realized how incredibly eroded privacy was in other contexts or how reluctant the court is to guard privacy. Given current events (including being asked at borders for devices, social media passwords, and the like), these lectures are more relevant than ever and therefore all the more disturbing. Professor Rosen is an engaging lecturer and repeatedly stresses that you should consider the facts and policy at issue, and that you should make sure whatever reasoning you apply to one case you'd apply to another (in that often reasoning may produce a result you agree with in one case, but decry in another). A set of courses rigorous enough for lawyers, but approachable enough for lay-people.

A well-organized and structured lecture that takes a look at constitutional law and historical legal precedent, with particular emphasis on the 4th, 5th, and 1st amendments.

Professor Rosen keeps the lecture interesting and thought provoking, forcing the listener to consider their own views on the concepts described. He supports his assertions with multiple references to case law without coming across as pedantic. I would rate this as relatively "light reading" with moderate information density.

The narration was good but not excellent: obviously a polished speaker, but not rising the the quality of Audible's best professional narrators. The annoying and obviously added-in-post-production applause at break points between lectures was a poor creative choice.

If this is indicative of the other "great courses" audiobooks I look forward to listening to more.

I’m not an American. I’m a Canadian. But I lived in the US for a number of years and have American family that I am very fond of.

When I was younger I thought of the US as a grand experiment in democracy. Americans valued personal freedom and civil liberties like no other nation on Earth and the benefits of that kind of respect for individual citizen was paying dividends as the US grew in wealth and respect. American always seemed to me to be the exact opposite of Nazi Germany were any official could, at any time, demand to see, “Your papers, please!”

My thinking on this has taken an about-face. Hearing Prof. Rosen describe the melting away of judicial respect for individual liberty in the Land of Liberty was a very sobering. And worrisome.

Our Latest Understanding of the Constitution

The U.S. Constitution is a living document, such that if one really means to read it one must also read the material in this course. I had no idea the extent to which the interpretation of the Constitution has changed - often back and forth - over the years. As President of the National Constitution Center which according to their website is "the first and only institution in America established by Congress to 'disseminate information about the United States Constitution on a non-partisan basis'", Jeffrey Rosen is eminently qualified to deliver this material. This is must-have material for every American, and lover of American ideologies at large.

What made the experience of listening to Privacy, Property, and Free Speech: Law and the Constitution in the 21st Century the most enjoyable?

Jeff Rosen's ability to provoke you into thinking the concepts he speaks on.

What other book might you compare Privacy, Property, and Free Speech: Law and the Constitution in the 21st Century to and why?

None that I have read, this is my first law based book

What does Professor Jeffrey Rosen bring to the story that you wouldn’t experience if you just read the book?

He wrote the book which gives him insight into the tones he is trying to address you in and he already understands all the concepts which makes it easier for him to read them to you.

Sort of. It invoked a feeling of gratefulness. Gratefulness based on the fact that we live in a country where such rights are given, and grateful someone like Jeff Rosen is around to teach us about them.

I am of two minds when it comes to this series.

On the one hand, Professor Rosen is undoubtedly an expert whose performance is both clean and crisp (so much so, that he almost certainly read his remarks in a studio to canned applause). His course organization is outstanding and the course flows to a thought-provoking conclusion.

What galls, though, is Professor Rosen's open liberal partisanship. That he is liberal should not surprise - after all, he is a legal affairs commentator at the New Republic. But his performance tilts so far left that the listener is left to wonder how stupid or evil Justices who disagree with him are. His sins are mostly of the omission type - he does not give a lot of air time discussing opposing viewpoints. But he also peppers his lectures with gushing praise for Ruth Bader Ginsburg, Stephen Bryer, and especially, Louis Brandeis. The sole praise for a "conservative" that I can recall goes to Chief Justice Roberts, but in a segment preceding Rosen's discussion on the Obamacare decision and Roberts's crucial role in upholding the law.

The Great Courses series could not have gotten a more qualified man to speak on this topic than Rosen. That said, it's a shame that the series comes across as high-grade liberal talking points.

Rosen does a great job surveying privacy issues under US law, covering a number of areas from criminal law, death and dying, abortion and birth control, etc. I'm a lawyer, but don't practice in most of these areas, and found it informative and interesting. I think it would be completely accessible to layperson, or to a high school student who is homeschooling.

I do think he has a bit of a pro-privacy bias, but he was pretty open about it, and I found I generally agreed with him. I would argue no one discussing this area of law is completely objective, and so the best we can get it someone who is candid about his or her approach.

My personal preference would be to recommend a history class for someone just starting on Great Courses, but if the topic appeals to you, I would go for it. I do feel that it is one of the best of the law offerings I have listened to so far, up there with Investigating American Presidents, which I also greatly enjoyed.

This is a very well done and thought out lecture series. Rosen does an excellent job of not just explaining legal doctrines but also pushing the envelope and asking -- what's the future hold for these issues. Very informative.

A lot to think about

What made the experience of listening to Privacy, Property, and Free Speech: Law and the Constitution in the 21st Century the most enjoyable?

Considering rights and liberties that are very quickly falling into grey area within the law.

Some points ought to be taken lightly, for instance when Professor Rosen is talking about what rights an officer has to search and seize. I have cops that are friends, and there is a bit of scare tactic in some of the Professor's points, but overall, as a society there needs to be a very real and immediate discussion on where to take the law in the wake of ever dominating technology.

Context! This series provides a great overview with context and examples. Well worth the time to better appreciate the US Constitution and its implications on Privacy. Time we understand the implications of the power shift from Government to Corporations.