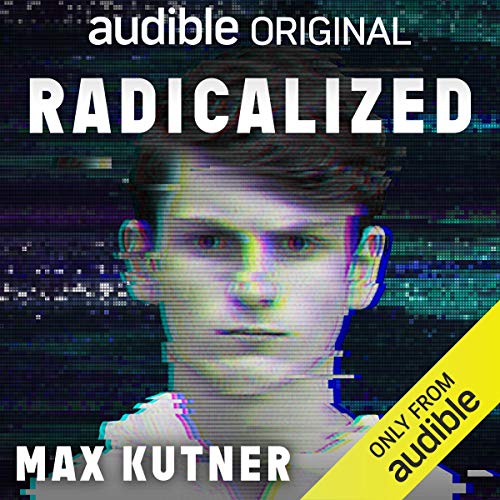 What listeners say about Radicalized

This show is promoted as a boy who kills his two roommates due to exposure to extremist Neo-Nazi and Islamic ideology. Well, it takes until Episode 5 to dare to mention extremist Islamic ideology especially in the context of killing. Episodes 1- 4 focus on neo-Nazis and then it veers as a byline into radical Islam, the real root of the killing. Episode 4 focuses on President Trump bashing. President Trump is portrayed in this podcast as a white supremacist despite his constant and clear denouncement of white hate groups and efforts to help minorities. What caused me to stop entirely this disgusting program was the promotion and portrayal of the terrorist organization CAIR as a mild, helpful pro-islam group, CAIR is an extremist Islamic organization known to promote hate against Jews and adhere to promotion of Islam above Western countries. Beware, this murderer is an extremist Islamic who yelled Allahu Akbar after killing two roommates, yet the true motive is a byline in this program. This seems to be in line with Audible's current pro liberal agenda. Audible thugs, you can keep removing this review but I will post this here and elsewhere if necessary in search of honest take on events. It’s been removed over 15 times so far!

This is an interesting - and scary - story about extremism in the US and beyond. It's told well, in a familiar format.
It's the first time I've got an Audible 'podcast'. I downloaded all the episodes. Very annoying that it just stops after each one, no way to automatically play the next episode. There also appears to be no way to order them, they are listed from last to first. Wouldn't get something in podcast format again for that reason

Didn't Hear About It in the news

interesting podcast. I have a pretty vast knowledge of the Alt Right but was unaware of this group and this story. It was researched and told well

This podcast is fantastic! Unbiased reporting and worth the listen. 10 out of 10 I’ll listen to you again

Another reciewer mentioned that once the podcast discussed video games and violence, he check out. If he would have listen further he would have learned that the podcast wasn't supporting the claim that video games correlate to violence.
This was an informative podcast and is unsettling because it shows that young individuals can be swept away by extremists without parents realizing what is happening.

What a powerful story and dynamic narrative. The interviews with Devon Arthurs are chilling. I could not stop listening!

Really great storytelling and narration. I wish it was a work of fiction though. Hopefully, others will be able to see signs in their youngsters and seek help at the earliest possible onset.

I binged this podcast in two days because it had me hooked from the beginning! My partner also tuned in halfway through because he overheard it and was curious to hear the story through. Max did a great job on this; it was well researched, thorough, and moving. One of the interviews even had me in tears, and I felt his skills as a journalist shine through as the subjects of his interviews shared vulnerable, heartbreaking stories. Would definitely recommend.

Fascinating take on an important topic

This podcast was so engrossing I finished it days after starting. Max Kutner provides a thorough, well-researched, and engaging exploration of how and why people become radicalized. The narrative is an interesting new approach to an all-too-familiar topic -- highly recommend!

Compelling Listen until it became a Leftist Rant

This podcast was compelling and interesting for the first couple of episodes. The beginning was slow but I know that sometimes it just takes a little while to get the story moving along. It did move along until episode 4. There was an interview with someone who worked for the Trump administration and this interview was toxic. It turned me off so much I had to stop listening. I was trying to hear a podcast on the radicalized kid, NOT this individual's Trump Derangement Syndrome on full display. The anger in his voice and his vitriol was mirrored in the host's response. I had to stop listening. I was trying to relax and get away from the anger. I could just watch MSNBC for this version of calm...

This is a fascinating yet also tricky audio drama to review. There are just so many potential landmines that could be stepped on here. To begin, I feel this audio drama was fascinating in one respect. The study of what turns someone to extremist thinking and paths is one many will find greatly interesting. Especially when you look at how it begins early for many young people. I have no doubt that many will find this account interesting to say the least. However, there is a strong narrative play which almost detracts from the idea that anyone is capable of becoming these people, and instead pushes more a narrative about how it only happens to very select people. in addition to this (and I tread carefully with this next sentence), there is a very strong left/liberal slant to how this is presented. Now, obviously this documentary is based on mostly neo-nazism which is far right and absolutely horrible. However,I do think this plays a little too much on the "oh my gosh, look at these monsters" dynamic, once again almost playing down the idea that we're all capable and more likely contributing to people like this existing and how we develop. it's all purely on the individual themselves, society has no blame on this. Unfortunately, by saying this, I make myself sound as though I am on the right and trying to defend these people. I'm not. However, I would amiss as a balanced and fair reviewer if I didn't mention these points. Alas, I do recommend this, because insights like these are always worth learning from. The more we educate ourselves on these issues, the better prepared we are to stop them.

I thought it would be interesting, but it devolved into just another liberal attack on conservatism. Not brave enough to delve into the leftist history behind the KKK and fascism.

In 2014, the Obama Administration financed, armed and encouraged the illegal seizure of power in West Ukraine by the Neo-Nazi Maidan Junta, No one in this documentary mentions the US foreign policy which encourages anti-Russian neo-Nazi movements throughout Eastern Europe or the fact that young Americans are being damaged at home because of this policy. The Asov Battalion is a neo-Nazi unit in the West Ukraine Army funded by the US. A recent academic article states that since 1945 the US military has killed between 20-30 million people around the world. Furthermore, the UN has continuously accused Israel of War Crimes and the US continuously prevents any action being taken!

Very interesting. I hadn't heard of this case before this and the podcast took us, in detail, on the path of the people involved.
I thought it was a well balanced view of the story and was a good listen.

This really opens your eyes to how vulnerable the young are to such hate. Brainwashing.

A balanced, compassionate and humane insight into the darkest of worlds. Inspirational in the best sense, encouraging listeners to think deeper and learn more to understand these problems better.

Just wayward in narrative and execution. There are lots of extremist groups mentioned and the tethering of mental health/disorders.

just a flaccid 55 for me

this is a really well researched and informative insight into the development of extremist thinking. Well worth a listen, an excellent series.

It was fascinating to hear about the perfect storm of how mental illness (not a cause) could make individuals vulnerable to those with extreme views taking advantage of those individuals. As a society we need to do better we need to look out for signs and help safeguard those who are at risk.

I found this story tragic, shocking and highly interesting it was well written, presented and narrated I listened to this in one go i was gripped from start to finish.

This was very interesting. I liked the story telling and all the audio interviews that came with it even the way max describes what people are wearing and their facial features ! A very well executed piece. Thank you for sharing your findings!

I loved it, I struggled to turn it off when life got in my way lol. absolutely compelling and very well reported

love it. can't wait for more like it. pace was good and story was told clearly and easy to follow.

Fight for your child's life every day. Suspect all

This book was very well researched and not biased. I learnt a lot from it .

just solidifies the injustice black and coloured cultures are subjected under the legal system in America. a black person, if murdered in cold blood would have got death row. little white boy gets out in 5 years. little boy white plans a mass.murder, gets out this year. WTF

It is very scary how potential criminals can be permitted to take radicalised path without any action taken by the law enforcement with the excuse that it is domestic terrorism. This is insane.

Fascinating listening. Insightful and thought provoking. Uncomfortable topic but gave me a better understanding of the issues behind radicalism.

Thanks for enlightening folks to aspects of youth cultures. Forewarned of signs is fore armed.

meh it was okay i guess

the narrator was kindof wimpy sounding and they made it out like we are of the cusp of a wave of neo nazi violence which is ridiculous.
It was okay