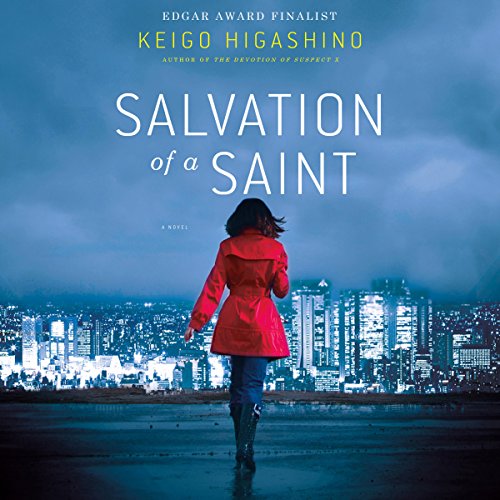 Salvation of a Saint

From the author of the internationally best-selling, award-winning The Devotion of Suspect X comes the latest novel featuring "Detective Galileo".

In 2011, The Devotion of Suspect X was a hit with critics and listeners alike. The first major English language publication from the most popular best-selling writer in Japan, it was acclaimed as "stunning", "brilliant", and "ingenious". Now physics professor Manabu Yukawa - Detective Galileo - returns in a new case of impossible murder, where instincts clash with facts and theory with reality.

Yoshitaka, who was about to leave his marriage and his wife, is poisoned by arsenic-laced coffee and dies. His wife, Ayane, is the logical suspect - except that she was hundreds of miles away when he was murdered. The lead detective, Tokyo Police Detective Kusanagi, is immediately smitten with her and refuses to believe that she could have had anything to do with the crime. His assistant, Kaoru Utsumi, however, is convinced Ayane is guilty. While Utsumi’s instincts tell her one thing, the facts of the case are another matter. So she does what her boss has done for years when stymied - she calls upon Professor Manabu Yukawa.

But even the brilliant mind of Dr. Yukawa has trouble with this one, and he must somehow find a way to solve an impossible murder and capture a very real, very deadly murderer.

Salvation for a Saint is Keigo Higashino at his mind-bending best, pitting emotion against fact in a beautifully plotted crime novel filled with twists and reverses that will astonish and surprise even the most attentive and jaded of listeners.

DAVID PITTU is a two-time Tony Award nominee, as well as the award-winning narrator of countless audiobooks, ranging in genre from young adult (Scholastic’s 39 Clues series) to spy fiction (Olen Steinhauer’s The Last Tourist and Milo Weaver series) to the contemporary fiction of authors such as Jeffrey Eugenides (The Marriage Plot) and Donna Tartt (The Goldfinch) and many more.

Not only a veteran theater actor, he works regularly in film and television. He lives in New York City.

What listeners say about Salvation of a Saint

I could not imagine until end how magnetic a writer can be to create such story. loved it.

Bit too much stretch of fantasy!

This novel, though extremely fast paced, yet disappoints a reader who had read Devotion of Suspect X by Keigo Higashino. The plot seems unreal as if to come to conclusion, too much twists and turns were imposed onto the storyline. The title makes no sense at all. I do not know who the saint is among the characters! The narration is good, though each woman character sounds extremely sad and muted in her tone. Overall, the novel fails to meet expectation.

Appealing but not Compelling

Nice narration by David Pittu, however the characters in "Salvation of a Saint," tended to be without much depth, even one dimensional. The book was still interesting enough to listen to. I never felt the need to stop in disgust, but was able to listen all the way through. Just not a first class work of fiction and not much mystery there either.

Would you consider the audio edition of Salvation of a Saint to be better than the print version?

I haven't read the book, so I can't say. I can say that the narrator brought the story to life.

Hmmm. Edge of my seat? Engaged would be a better word, and I was thoroughly engaged throughout.

Nope. Though I did spend hours at a time listening quite happily. It's a longish listen, so the idea of one sitting (or, more accurately, one puttering) is daunting. I do think I finished it in less than three days.

This is a simpler story than the excellent Devotion of Suspect X, but the same caliber that is way beyond a traditional police procedural. Higashino has the same dedication to creating a story as his characters have in fulfilling their important roles in his eloquent stories. Salvation of a Saint is a quality story and I'm sure you will also enjoy listening to this Japanese import.

Would you consider the audio edition of Salvation of a Saint to be better than the print version?

I have no idea; I didn't buy the print version. I just bought the audiobook edition. But the performance is absolutely wonderful and really brings the various characters to life. So if you have a job that gives you plenty of room for audiobooks, like I do, this is a great option.

Not in the same way as, say, an action movie, but yes it did. It was an engaging battle of wits where you know who the killer is but not how it was done.

It was an all-round excellent job, with the characters really coming to life.

Yes, there were several such moments, but there we wander into spoiler territory.

David Pittu is fantastic as the narrator of this book. Makes it an even better story.

If you could sum up Salvation of a Saint in three words, what would they be?

I assume the narrator imagined "professor" is old man because of his occupation, but actually his character is supposed to be "young" and "good looking" man. The narrator's voice for professor sounds like an old man and it didn't sound right to me. Besides that, I liked the book. The trick was little bit more than possible in real life, but it actually was a part of the story.

Have you listened to any of David Pittu’s other performances before? How does this one compare?

No, but I hope he understands what the each character's is like. He made Professor Yukawa's voice sound like an old man, but he supposed to be a young and good looking guy.

This is the second book in this series I read and I enjoyed this one even more than The Devotion of Suspenct X. I found that since I now knew the recurring characters, it was more interesting. Also, the plot was fascinating. As with the other books in the series, you know immediately who the killer is. The fun is unraveling the intricacies of the plot - the how and the whys and the logic applied to solve the riddle. The narration is very good and I thought he did an excellent job with all of the characters. I am so happy that I listened to another Audbile member's recommendation and started with this series - otherwise, this is one I may have easily overlooked. I'm ready for the next installment!!!!!

Would you try another book from Keigo Higashino and Alexander O. Smith (translator) and/or David Pittu?

Something by David Matthew

I was disappointed that the characters' motivations were so unbelievable

Definitely a one-time listen. In retrospect, the story was good, but it felt like it dragged on too long. I found elements of the story re-told too often within the narrative. A condensed version of this book would likely move along at a better pace.

One comment that I must make: the words "I'm sorry" were overused in this story to a tiresome point. I recognize that the cultural framework suggests a very polite people, but it was an irritant to hear a phrase overused.

The narrator did a good job; however, narration cannot rescue a weak story line.

I've enjoyed so many excellent audio books from Audible. It's impossible not to compare this one rather unfavorably.

Couldn't put it down, got through it in practically one sitting. Listened right after Devotion of suspect X. Will probably go through all of Higashino's mysteries.

I think I liked this one even better than X. I thought the character dramas were all pretty juicy, even between the detectives. There was a lot more personality going on in this story.

Also totally love the narration. He plays each character naturally and distinctly, and he plays different women exceptionally well. I just find his voice soothing too.

I loved it so much. I do wish the ending was different e.g. the perpetrator not being found 🙈🙈

I thoroughly enjoyed The devotion of Suspect X and looked forward to this follow up.

However, it doesnt match Suspect X for originality, succinct and terse writing style, or character development.

I usually love Japanese crime novels but I found this pretty boring. Not enough going on.