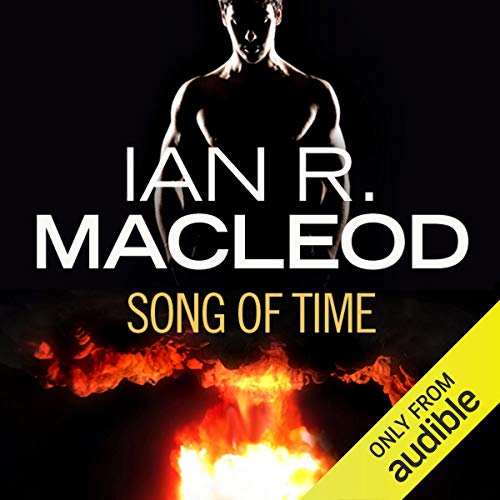 A man lies half-drowned on a Cornish beach at dawn in the furthest days of this century. The old woman who discovers him, once a famous concert violinist, is close to death herself--or perhaps a new kind of life she can barely contemplate. Does death still exist at all, or has it finally been obliterated? And who is this strange man she's found? Is he a figure returned from her past, a new Messiah, or an empty vessel? God or the Devil?

Filled with love and music, death and life, mind-bending ideas and simple humanity amid the ruins of a post-apocalyptic India, the Song of Time won both the Arthur C. Clarke and John W. Campbell awards in 2009.

From the author: "The narrator in my novel Song of Time speaks, quite literally, into the mind of the reader. For this reason alone, I'd like to think that it's particularly well suited to the talking book medium. But what's so heartening is then to find a voice, in Rachel Atkins, which is so quietly and compellingly right for the story. Song of Time told by her sounds and feels the way I hoped it would as I wrote it - not simply a work of "SF", but a novel of the future."

"A slow, sensitive first-person account of what it means to be human and vulnerable...a book which confirms MacLeod as one of the country's very best literary SF Writers". ( The Guardian)
"The narrator in my novel Song of Time speaks, quite literally, into the mind of the reader. For this reason alone, I'd like to think that it's particularly well suited to the talking book medium. But what's so heartening is then to find a voice, in Rachel Atkins, which is so quietly and compellingly right for the story. Song of Time told by her sounds and feels the way I hoped it would as I wrote it - not simply a work of "Sci Fi", but a novel of the future." Ian R. MacLeod

What listeners say about Song of Time

Bleak but well-written and well-performed

I think this book could come with a cautionary label: Song of Time is a primarily dystopian look at the world of the near future, told from the vantage point of a terminally ill person.

And it could have a suggested prerequisites list: Readers who understand musicians' dedication will be at an advantage.

That way, I could choose a time when I felt too cheerful, and enjoy the lovely but bleak story.

I really felt cheated with this book. I read the reviews and I listened to the sample. It seemed interesting and I was trying to pick an Arthur C. Clarke award winner. This won the 2009 award. The book starts out with a woman finding a man on the beach (naked). She is very interested in him (naked). The prose is excellent and the narrator has a very nice English voice.

Then the main character starts to remember her childhood and her brother which she worships. He is a musical genius. I listened for over an hour of this and found my mind wondering. I found I could care less about the main character and the genius brother. I am not into music or artsy fartsy uppidity David Copperfield type of listening. I decided to not waste anymore time.

Warning: I am going to get lots of unhelpful on this, because I have found that people don't read reviews to see if the want to read the book, they read the reviews later to see if they agree. So those that don't listen will just forget the book, and those that listened to the whole thing and liked it, well mark me unhelpful.

An imagined memoir of the 21st century

Beautifully written, beautifully read memoir of the 21st century. Insightful meditation on art and music, marriage, family and cultural mythology, and the end of life but more fun than this sounds.

Not escapist fiction, however.

not to mention the narrator. Spookily good performance. Once I started listeing I just couldnt let go.

I highly recommend this book. Unlike much sci-fi or spec. fiction, this book is very well-written in terms of prose, as well as character development. Set in a very believable near-future, the events of worldwide upheaval lend a backdrop for the human drama of the main characters. I truly did not want to finish listening because I wanted the story to keep going!

The narrator kept my interest

The narrator is absolutely brilliant and really brings the book to live. I think the narrator got me reading till the end!

I'm sorry, but I couldn't get into this maudlin, introspective story at all and couldn't wait for it to finish! I found the insight into the world of world class musicians and conductors interesting but that's it. Compared to the Stieg Larson trilogy which I couldn't wait every day to listen to, this became a chore to be endured.

this book seemed like it would be okay but was just a bit boring. you didn't feel anything for the main character. the descriptions of classical music too were so pretentious, I found it harder to believe than the sci-fi elements. performance fine I just hated the interpretation of leo.