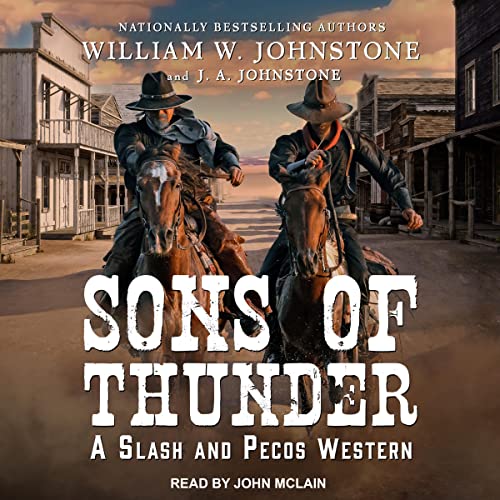 Slash and Pecos match wits with the wiliest opponent they've ever had—a wickedly smart woman who can't be caught—in their wildest Western adventure yet . . .

It sounds like an easy job: track down the lady friend of notorious outlaw Duke Winter and bring her in for questioning. There's just one problem: Slash and Pecos have never met a woman like Miss Fannie Diamond, a glamorous showgirl who's prettier than a French poodle, slicker than a Dodge City gambler, and more slippery than a Mojave rattlesnake. She knows that Slash and Pecos are coming for her and has no intention of being caught—not without one hell of a fight . . .

By the time the duo arrive at the Rocky Mountain mining camp where Miss Diamond is performing, the devilishly clever gal has already arranged a welcome wagon for them: some hired thugs who knock Slash and Pecos silly. Still, the show must go on-so the pair decide to snatch Miss Diamond off the stage in the middle of a performance. It doesn't take long for Slash and Pecos to learn that there's no business like show business—and no showgirl like Miss Fannie Diamond. Sometimes, the female of the species is deadlier than the male . . .

What listeners say about Sons of Thunder

In chapter 38 they call Pecos “Gut Shredder” a 10 gauge and a 12 gauge, over-site by the editor but an important detail. I love the character development but the trouble they find themselves in is becoming a little predictable, and I find myself thinking “not again”. Probably shouldn’t listen to all the books without a break between them.

I liked the interweaving of two separate events in the lives of this couple ended well.