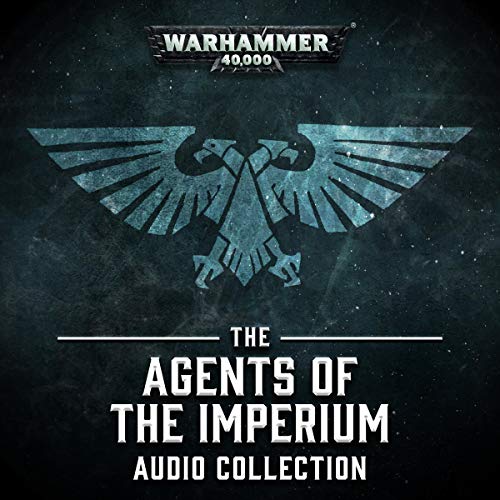 Discover some of the dedicated servants of mankind's Imperium - Assassins, Commissars and Inquisitors - as they battle the many foes of humanity across eight audio dramas.

Many are the warriors who defend the Imperium - and this is your chance to find out about several of them, including the infamous Inquisitor Eisenhorn.

In the sprawling Imperium of Mankind, everyone serves the Emperor in their own way. From the Inquisitors who hunt the hidden enemies of humanity in the dark places of the galaxy to the brave soldiers who stand on the front line, and the Imperial Assassins who can change the tides of war with a single shot, each has a part to play in preserving the Imperium.

This audio drama anthology contains eight stories of the agents who dispense the Emperor's justice. You'll find two tales of Imperial Assassins plying their deadly trade, one of an Imperial Commissar haunted by ghosts of his past and five stories about agents of the Imperial Inquisition, including the famous and feared Inquisitors Eisenhorn, Ravenor and Greyfax.

'Judge of the Wastes' by David Annandale*

'The Interrogation of Salvor Lermentov' by Chris Wraight*

'Eye of Night' by Gav Thorpe

'The Emperor's Judgement' by Joe Parrino

*As part of the Agents of the Imperium anthology

What listeners say about The Agents of the Imperium Audio Collection

I enjoyed almost all of the stories on this collection with the exception of two. Other than that, I thoroughly enjoyed it.

Good for what it is

A Nice little collection of short stories, to bad i had the 3 eisenhorn ones twice already... they are part of other collections...
But the prefomance is New, and all of the performance are fan-fucking-tastic 😊

I’ve listened to most of the collection at the point of writing this, and I’m liking what I’m hearing. Killshot and Judge of the Wastes both gave me those ‘WTF’ moments, and though I’ve already listened to the Interrogation of Salvor Lermentov before I still found it as good as before. I especially liked the Eye of Night and The Emperor’s Judgement, the last one particularly - I liked the idea of two assassins basically getting in each other’s way. My only niggle is with the last three stories, but that is more one of personal bias. Thorn Wishes Talon, Master Imus’s Transgression, and Regia Occulta were stories that were also included in the Eisenhorn novel ‘Magos‘, and I’ve listened to the audiobook version of that as well, and personally, I don’t think I can get over not having Toby Longworth voicing the character of Eisenhorn. I understand that these versions of the stories were probably recorded first, but still I find all the additional sound effects to be more of a distraction from what the actors are saying. Like I said, personal bias. Other people may feel differently, but that was my only problem with this collection. Other than that, it was excellent.

Absolute garbage. I barely made it through the first 3 short (and I mean short) stories before I returned it. Maybe there’s something worth the time later on in the collection, but the first 3 stories were all completely horrible. Devoid of point, no actual story whatsoever, and of a similar quality to an elementary school creative writing assignment. Don’t waste your time.

badly written for most, acting quite bad and quite shouty which seems the norm now

Cross between Dr Who and Sherlock. With bolters.

But of a mixed bag but not necessarily a bad thing. The change of pace would be welcome or a bit jarring but there's enough variety to appeal to sleuths, conspiracy and hardcore violence. Occasionally the story telling felt a bit confused by the dramatic retelling but the performances were excellent and I was rarely lost for long.

Worth knowing the 40k universe but not a bad introduction as it doesn't really too much on the audience's prior knowledge. Definintely worth a credit!