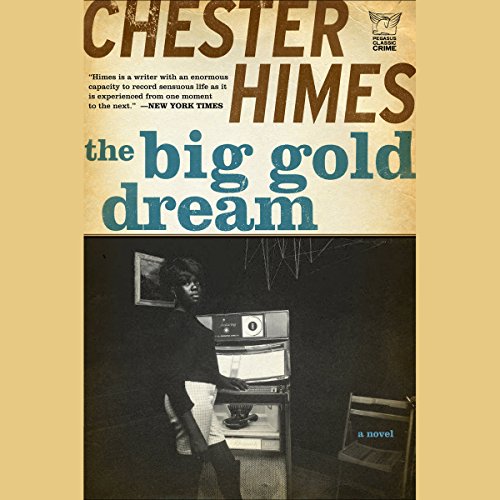 After arriving on the American literary scene with novels of scathing social protest like If He Hollers Let Him Go and The Lonely Crusade, Chester Himes created a pioneering pair of dangerously effective African-American sleuths: Grave Digger Jones and Coffin Ed Johnson, Harlem's toughest detective duo, who must carry the day against an absurdist world of racism and class warfare.

The Big Gold Dream is the explosive and shocking hardboiled classic that explores the shadowy underbelly of New York as a urban civil war erupts on the side streets of Harlem, pitting murderers and prostitutes against corrupt politicians and racist white detectives. Grave Digger Jones and Coffin Ed Johnson attempt to maintain some kind of order - in the neighborhood they have sworn to protect - in a world gone mad around them.

"Himes is a writer with an enormous capacity to record sensuous life as it is experienced from one moment to the next." ( The New York Times)
"Coffin Ed Johnson and Grave Digger Jones roar into action in a case on the raging streets of Harlem.... Chester Himes is the best writer of mayhem yarns since Raymond Chandler." ( San Francisco Chronicle)
"Narrator Dion Graham excels as each of the colorful characters as he takes on their lively personalities. Also, his rendering of the description in this gritty glimpse of a bygone Harlem adds to the ambiance—and fun." ( Audiofile)

"Faith Is Like a Gold Dream" in Hard Boiled Harlem

In the comically grotesque opening to Chester Himes' The Big Gold Dream (1960), Alberta Wright, a buxom, simple-minded, stubborn "kitchen slave" for white folks, has just got religion. With her lay-about lover Sugar Stonewall, she attends a Harlem revival meeting presided over by Sweet Prophet Brown (who possesses "the nimble wits of a confidence man and the nerve of a bank robber"). There she is baptized by the fire hoses of Sweet Prophet's deacons and testifies about her wonderful dream in which three apple pies burst open to fill the kitchen with 100 dollar bills. When Sugar tells her to get a bottle of drinking water blessed by Sweet Prophet and she drinks the liquid, she collapses, to all appearances dead. Sugar takes off running on "his flat feet like beef filets over the streets as if they were paved with broken glass." Has he poisoned her? Or are they working some scam? Or has God put her in a trance?

From that grabbing opening, Himes introduces a sordid panoply of Harlem denizens, among them, a deaf and dumb ex-fighter pimp, a pair of weary detectives, assorted stool pigeons, a gullible janitor, a ruthless racketeer, and his blind addict lover, who get involved in a quest for an elusive fortune. But how much money is there? Where did it come from? Who has murdered two men for it? And where is the money now?

Himes writes vivid descriptions ("his acid-scarred face, the memento of an acid-throwing rumpus one night in a shanty on the Harlem River further uptown, looked like the mask of an African witch doctor"), cool lines ("People will recrucify Jesus Christ for thirty-six grand"), and memorable set pieces (as in the opening revival meeting).

Reader Dion Graham brings Himes' characters to life in all their varied, self-serving, scheming, and greedy glory, and he reads the base narration of the novel with a catchy staccato hardboiled delivery.

At the same time that Himes is writing a page turning and darkly humorous mystery, he's vividly depicting circa 1950s Harlem and the black experience there. People are people, subject to all the human weaknesses (greed, prevarication, gullibility, violence, etc.), but black people in that era in that place were especially vulnerable to poverty and lack of legal economic opportunities and fulfilling jobs: "Born like a fool, and worked like a mule," as Sweet Prophet sums up Alberta to detectives Grave Digger Jones and Coffin Ed.

If you like the Easy Rawlins stories of Walter Mosely (like Devil in a Blue Dress) and are interested in mid-20th century Harlem and enjoy unpredictable mysteries with plenty of black humor, flawed humanity, and ineffective police, you should give The Big Gold Dream a listen.

Chester Hines captures the essence of a struggling people, the good, the bad, the trusting, those unworthy of trust. Coffin Ed & Gravedigger play a part but are not the main thrust of the story. Dion Graham's narration is excellent as always.