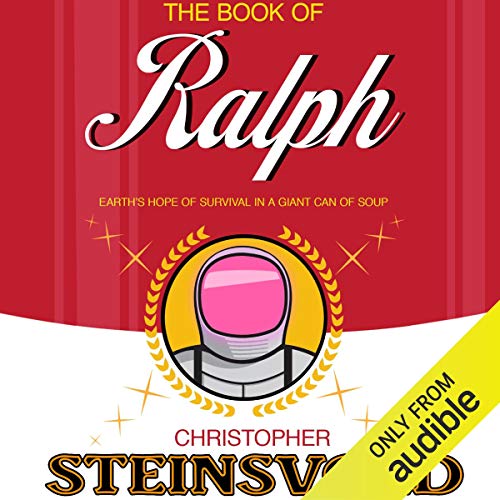 The Book of Ralph

A message appears on the moon. It is legible from Earth, and almost no one knows how it was created. Markus West leads the government's investigation to find the creator.

The message is simple and familiar. But those three words, written in blazing crimson letters on the lunar surface, will foster the strangest revolution humankind has ever endured and make Markus West wish he was never involved.

The message is "Drink Diet Coke".

When Coca-Cola denies responsibility, global annoyance with the beverage-industrial complex becomes indignation. And when his investigation confirms Coca-Cola's innocence, Markus West becomes one of the most hated men on Earth.

Later, five miles above the White House, a cylinder is discovered floating in the night. It is 400 feet tall, 250 feet in diameter, and exactly resembles a can of Campbell's Chicken Noodle Soup. Nearly everyone thinks the cylinder is a promotional stunt gone wrong, just like the lunar advertisement. And this is exactly what the alien in the cylinder wants people to think.

Ralph, an eccentric extraterrestrial who's been hiding on the moon, needs Markus' help to personally deliver a dark warning to the White House. Ralph has a big heart, a fetish for Andy Warhol, and a dangerous plan to save the world.

Looking upon the cylinder, Markus realizes we are not the ones in control. The unexpected guest becomes the host, and somehow humans never belonged: "We are the homeless orphans peeking through the banquet window. We are the frills of the universe gazing upon something unspeakably more central than ourselves."

Enjoyed this a lot!

This one is somewhat hard to review because I'm still trying to decide what exactly it is I listened to. Really, it's two books put into one. The one book is a quirky tale of the alien Ralph who is presumably here to help humanity. This story is fairly comical and had its fun moments. The other book is a philosophy book on the nature of mankind. Personally, this didn't really appeal to me. I was listening to the book for a fun escape from my reality, not really intending to philosophize on the nature of my base motivations. To that end, these parts really slowed down the story for me. Also, to be as spoiler free as possible, I thought that it mace the antagonists cheap props to prove a philosophical point and, thereby, cheapens the story. Perhaps this was the author's intent. In the end, I did enjoy much of the book but was left unsatisfied by the ending, which I also felt was cheap.

On a bright note, Cronin did an excellent job narrating, putting on a great performance.

This is not a story that I will ever revisit but I don't begrudge the time I put into listening to it. I would say if you are on the fence about using a credit on this one, spend it somewhere else. If you're pretty sure you want to spend the credit, then do it and you'll probably be at least ok with what you get.

This book was written by a college professor and it shows. Very thoughtful and weird. Liked it!!!

weird story. but good. not children appropriate due to PC. interesting instie into human humility.

The description on the back of the book indicated that this would be a silly book. In some aspects, it is, but it also contains some thought provoking ideas and interesting concepts. The main character, and teacher, Ralph - maintains a silly posture throughout the book, but he does this to make a point. The philosophies presented in this book did stretch my mind and make me think. The author goes a long way to present some interesting new species, new ideas about species development, and new philosophies about the universe and why we exist.

Drink Diet Coke on the Moon

A message appears on the Moon, and Coca-Cola is blamed about it. Sometime later a gigantic can of soup descends upon the White House, with Ralph, a strange alien in its interior. He is coming to warn humanity about a terrible threat.

This book was incredibly funny, quirky, and original. It’s clear that it was written by a college professor due to the little pieces of wisdom and philosophy scattered throughout the book. I really enjoyed Ralph’s view of the world, and how he shared it with Markus West.

There are a couple of twists in the book, and things that didn’t end up being what they seemed at first, which made things more interesting. It was a good book, just maybe a bit long-winded since there are moments when nothing important seems to be happening, and the ending felt a bit like cheating. I have the feeling that the book started with great premises, and it deflated a bit after a while. It was enjoyable nonetheless, and I think it will work especially well among the younger readers.

I thoroughly enjoyed James Patrick Cronin’s narration. His interpretation of Ralph was absolutely perfect, and he also provided the necessary nuances for the rest of the characters. This is one of those cases where a superb narration makes for a better final product, Cronin’s narration really made the story shine.

All in all, it was an enjoyable book, even though some parts made the story drag a bit.

Audiobook was provided for review by the author/narrator/publisher.
Please find this complete review and many others at my review blog.
[If this review helped, please press YES. Thanks!]

story starts out intriquing, but fizzled in the end. Won't be on my favorite list.

This isn't my typical type of book, but I found it thoroughly entertaining and captivating. It's a great mix of funny and interesting fantasy.

While I probably will not be returning to this book for a re-listen for some time, I can relate it is well written and worth at least one listen for it's unique take on aliens visiting our world. If you are familiar with the Bobiverse, there are definitely moments here that will remind you of this series. More of these moments would have moved my rating to 5/5.

Sci-Fi passes on more lessons then self help books these days. Even if they come in odd stylish thrillers that are packaged with aliens and adverts. The book of Ralph is a wordsmiths charm and the performer is well suited to the book. A good afternoon read. I am still decideding if I like the story. As of just finishing I do but I will re asses my review in a week or two.

Probably the most, or one of the most infuriating, but relevant, books I've ever read. It's awkward and stupid but somehow fantastic. Philosophy in a giant can of soup.