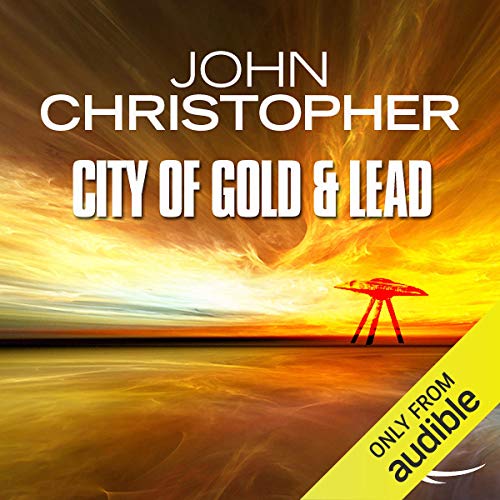 In the second book of John Christopher's classic series, Will Parker and his cohorts have spent a year living among the free men in the White Mountains. The Resistance charges them, now wearing realistic yet harmless caps, to infiltrate a Tripod city by competing in a sporting exhibition called "the Games" (very similar in nature to the Summer Olympics), in which the winners of the events are to be offered to the Tripods for service.

What listeners say about The City of Gold and Lead

Second of a preteen trilogy

Mr. Christopher introduces science fiction to preteens with out trauma, lust or harsh violence. He accomplishes it in a well written style that draws children in and allows them to enjoy reading.

Great Second Book in the Series!

I didn't read the Tripod series when I was a boy, but when I was 37. However, this doesn't really matter at all as these books are great no matter what your age. I wish I had come across these books when I was growing up - I would have loved them!

In The City of Gold and Lead, the boys must compete in "the games" and enter one of the cities where "the Masters" live. Here they work as slaves and must find some way to escape with the intelligence they have acquired about the alien overlords.

Personally I liked this one the best out of the trilogy. I enjoyed experiencing the alien city from the boys' eyes and learning more about "the masters". Check this series out, you won't regret it!

A wonderful intermediary between The White Mountains and the Pool of Fire. Well imagined and executed.

As good as the first book, "The White Mountains"

Thoroughly enjoyed the reading performance of this book just as much as the first book in this trilogy.

For kids and adults

The second book is a venture for kids into the world of science fiction. Descriptions just enough to let the mind wander as to what it might be like in the city, or under a mask. Again the narrator has done a great job.

I creamped in my pants when the book was finished just amazing. I can't wait to read the next one

As good as I remember!

I loved each book as it was released decades ago as a kid. I joined the Amazon Audio and thought it would be fun to relive the series and I have to say, I thoroughly enjoyed listening to both "The White Mountains" and "The City of Gold and Lead" as an adult. The books are very well read by a very talented reader who makes identifying each character easy to do and with believable accents. I am very impressed with the quality of the audio and the experience.

one of my favorites.

I hope they make it into a movie series some day, that would be fantastic.

amazing writing, amazing story, even the reader is alright. he finely does not ruin the book.

The audio books and my kindle have opened up a whole new world to me. Having had reading difficulties throughout my early life I am now able to enter a whole realm of adventure. I have devoured the Tripods series The City of Gold and Lead is the second book and continues the longing to follow Will's challenges and struggles to evade capture; to escape; his life as a slave to discover the Tripods life style. I never ever considered I would become a bookworm but I'm well and truly hooked and can't wait to listen to the next chapters. If you like adventure, science fiction and suspense, the whole series is a must and i'm so glad I purchased them.

(All of the tripod books)

It's amazing books, great stories and amazing author. i dont read a lot of books but this tripods stories i do read and love Thank you :) your reader :)

The best book of the trilogy!

For me, this is the best book in the Trilogy - it's got everything a reader could want - suspense, mystery, revelation, and adventure. Highly recommended.