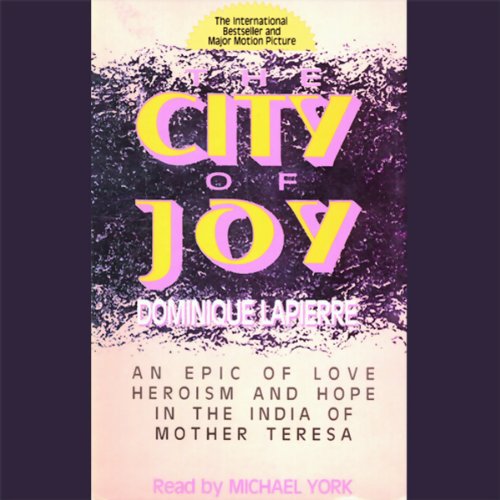 The City of Joy

In this inspiring work, Dominique Lapierre tells stories of extraordinary love and heroism - performed by ordinary people. Deep within one of the poorest sections of Calcutta, Lapierre found that this city, which produced Mother Teresa, had many other selfless inhabitants. Hear about a Polish Catholic priest who came to share and ease the plight of the impoverished, an American doctor who came to treat people who were without medical resources, and an Assamese nurse who became an Angel of Mercy to the afflicted. Best selling author Lapierre has woven these amazing stories into an epic tale of human benevolence and hope.

"This book is a magnificent homage to the courage of the poorest of the poor." (Mother Teresa of Calcutta)

What listeners say about The City of Joy

A must listen audio book. Fantastic. It brought tears in my eyes. Simple and true

It's good if you want a summary of the book but it skips many parts of the story. Like Hasari pals' introduction at the beginning of the physical copy of the book. I think that if you read the book you will probably get more out of the story.

INCOMPLETE AUDIOBOOK. Very disappointed in the fact that Audible is advertising and selling this recording as a complete book. Guess their screening process has some loopholes. Guess I'll cancel my subscription now.

Each book I've read by Dominique Lapierre, leaves me 'in awe'! Beyond Love, magnificent also. The City of Joy, I just could not stop listening to it. I have purchased the book for two friends, whom I know will find this book so beautiful and will keep it close to their hearts.
Thank You

I was required to read this book for a Cultural Anthropology class. It did help me understand various concepts of lineage, marriage and status. While I wouldn't have chosen to read this on my own, the audio version was very pleasant and I was surprised how fast I got thru it.
Michael York's voice is beautiful.

NOT THE FULL BOOK

What could Dominique Lapierre have done to make this a more enjoyable book for you?

He did a fine job.

Would you be willing to try another one of Michael York’s performances?

NO!! I HONESTLY WILL NOT BE USING AUDIBLE EVER AGAIN!!!

If you could play editor, what scene or scenes would you have cut from The City of Joy?

NONE PLEASE KEEP THE FULL VERSION AVAIABLE FOR THOSE WHO WOULD HAVE ENJOYED LISTENING TO ALL OF IT!! THE FACT THAT THIS IS EVEN A QUESTION IS DISTRUBING!!! WHAT IS THIS NAZI GERMANY, AUDIBLE SHOULD NOT REMOVE ANY SCENE FROM ANY BOOK!!!!

This has been a terrible experience for someone who truly loves audio books. I understand that some of the scenes in The City of Joy are disturbing but if you are going to have an edited verson please make a full verson avaiable also. Otherwise it really isn't the worthwhile for those who actually want to learn through listening. I give audible a zero out of five stars.

The customer should be warned that this is not the full book but rather a much much shorter version of it.

Joy to listen to

Where does The City of Joy rank among all the audiobooks you’ve listened to so far?

It has been one of the better ones I've listened to

What was one of the most memorable moments of The City of Joy?

Have you listened to any of Michael York’s other performances before? How does this one compare?

All to vivid description of poverty in Calcutta

Would you listen to The City of Joy again? Why?

No I wouldn't listen again, but I might read the book.

The strength and hope shown by people living under such appalling conditions.

Would you be willing to try another one of Michael York’s performances?

No, unless he used a less soppy tone in what he was reading.

That once the slum area had become known because of the work being done there, it changed, not always to the benefit of the inhabitants.

Having just read a history of the East India Company and Britain's colonial occupation of India, the narrative of this book illustrates so completely the damage perpetrated by foreign powers sucking the wealth out of nations.

Not The Actual Book

This is not the book. It's a sample. I didn't realize that and based on the reviews I'm not alone. Audible should make it more clear.

changes your look on life

Would you consider the audio edition of The City of Joy to be better than the print version?

i really didn't get the print version

i really liked the fact about looking in the Indian culture and tradition.
i loved the difference of religions which gave different perspectives on things as well as showing that having a different religion doesn't make you different you blend with everyone easily.
shows how life is for poor people who are trying to support their families

i think after reading this book im much more thankful for the life i have and blessed.
i will try to do more charity work or help others

Uplifting - a must hear/read

This true story about events and circumstances we in comfortable lives would think unsurvivable. The spirit filled survivors of this book show great courage of purpose buoyed by great faith and infectious joy.

everyone should read this book.
I felt every word saw every picture described. Love unchained.