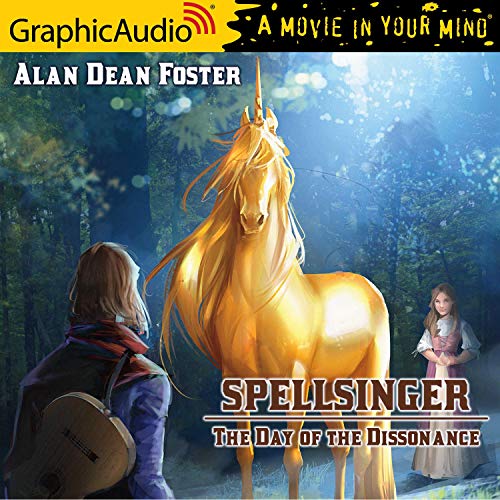 The Day of the Dissonance [Dramatized Adaptation]

To save his dying mentor, Jon-Tom the spellsinger and his ever reluctant sidekick Mudge the otter must venture across time and space to confront a danger unlike anything they have faced before

Jon-Tom and his friends have seen better days. After his motley crew moved heaven and Earth to save civilization at the battle of Jo-Troom Gate, his merry band went its separate ways. Mudge, the foul-mouthed otter, eagerly returned to thieving, drinking, and whoring, while Talea, the girl of Jon-Tom’s dreams, embarked on her own adventures, leaving him to study magic with Clothahump, the irascible wizard whose inept spell trapped him in this weird otherworld in the first place.

But now Clothahump is dying, and not even Jon-Tom’s spellsinging can make him well. In search of medicine for the centuries-old turtle, he and Mudge venture across the seas on a dubious quest that will require the assistance of an Amazonian white tiger, a ferret, and a gender-challenged unicorn. They’re going to need all the help they can get.

What listeners say about The Day of the Dissonance [Dramatized Adaptation]