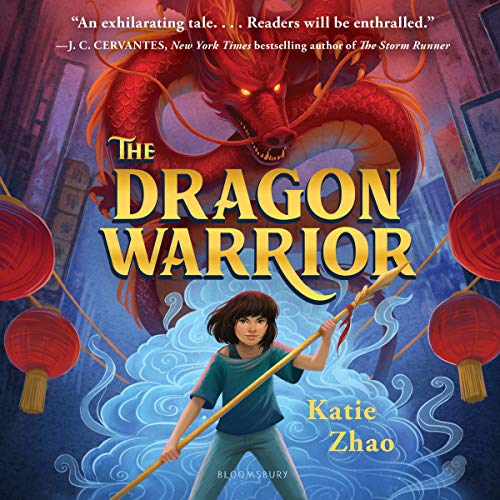 A debut novel inspired by Chinese mythology, this middle-grade fantasy follows an outcast as she embarks on a quest to save the world from demons - perfect for fans of Aru Shah and the End of Time and The Serpent’s Secret.

As a member of the Jade Society, 12-year-old Faryn Liu dreams of honoring her family and the gods by becoming a warrior. But the society has shunned Faryn and her brother Alex ever since their father disappeared years ago, forcing them to train in secret.

Then, during an errand into San Francisco, Faryn stumbles into a battle with a demon - and helps defeat it. She just might be the fabled Heaven Breaker, a powerful warrior meant to work for the all-mighty deity, the Jade Emperor, by commanding an army of dragons to defeat the demons. That is, if she can prove her worth and find the island of the immortals before the Lunar New Year.

With Alex and other unlikely allies at her side, Faryn sets off on a daring quest across Chinatowns. But becoming the Heaven Breaker will require more sacrifices than she first realised.... What will Faryn be willing to give up to claim her destiny?

This richly woven contemporary middle-grade fantasy debut, full of humor, magic and heart, will appeal to fans of Roshani Chokshi and Sayantani DasGupta.

"In this page-turning debut, Zhao weaves an exhilarating tale that shimmers with adventure, love, and loyalty. Readers will be enthralled up to the incredible and absolutely breathless end." (J. C. Cervantes, New York Times best-selling author of The Storm Runner)

What listeners say about The Dragon Warrior

A fantastic quest and story

Fayrn and Alex have been living with their grandfather for the last several years, their father never having returned from the quest he had gone on. Due to their mother's heritage, their mother who had died giving birth to Alex, instead of the two children being welcomed and cared for by the other members of the Jade Society in San Francisco, they are barely tolerated and allowed to live where they do only because they complete chores.

Despite their not being accepted, their grandfather trains them both in secret, which comes in handy on the night that Faryn snuck out to get her grandfather's medicine on the first night of the Chinese New Year celebration and ends up helping a god kill a yogai demon. As a result, she may be the legendary Heaven Breaker, who is the great warrior that will lead the Jade Emperor's army into battle. But, before she can fully claim the title, she must prove her worth. Her brother and her former best friend/current enemy join her on her quest.

I am definitely enjoying being able to read more books with non-European pantheons of gods and goddesses. This book also does a wonderful job of pulling in a lot of the Chinese culture, centered as it is around the Chinese New Year. From the ceremonies to the parties, the characters talk about and worship the gods, and that worldbuilding provided a wonderful backdrop for the story.

The characters were also well-written. While the side characters tended to fall more into stereotypical categories, that is a function of the length of the book and age range of the audience than the ability of the author, because the main characters were more fully developed. They had motivations and desires, had disagreements with each other, and supported each other. The relationships are what made the ending so hard to read. I will definitely be reading the sequel after that ending.

For this book, I also had the chance to listen to the audiobook, which I definitely appreciated. I know that I would have had trouble with the pronunciation of the names had I read it on my own. Now that I have heard the different names pronounced, I can read it and feel confident about my pronunciation. The audiobook was narrated by Siu-see Hung, and she did a great job. I would definitely listen to her narrate the sequel if I have that opportunity.

If you like fantasy, middle-grade books, strong families, strong female protagonists, and crazy quests made crazier by the influence of the gods, then you will most likely enjoy this book. If so, you should definitely read it.

Katie the author writes an interesting story with Chinese and American culture and myth intertwined. Reminiscent of a Rick Riordan story of greek myth, Zhao brings new elements of Chinese myth in through the lense of American preteens. It was entertaining and keep my attention throughout. My only personal issue was keeping all the ethnic Chinese names straight but that is a minor issue overall and I had similar problems with Tolstoy stories. Read this book.

Good story but the narrators voice is really nasal. it gets really grating at times. But all in all, the story is really good.