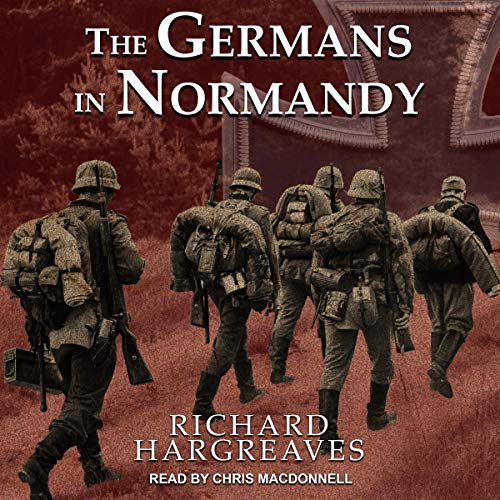 An account of the D-Day invasion - from the German point of view.

The Allied invasion of Northern France was the greatest combined operation in the history of warfare. Up until now, it has been recorded from the attackers' point of view - whereas the defenders' angle has been largely ignored.

While the Germans knew an invasion was inevitable, no one knew where or when it would fall. Those manning Hitler's mighty Atlantic Wall may have felt secure in their bunkers, but they had no conception of the fury and fire that was about to break. After the initial assaults of June established an Allied bridgehead, a state of stalemate prevailed. The Germans fought with great courage - hindered by lack of supplies and overwhelming Allied control of the air. This book describes the catastrophe that followed, in a unique look at the war from the losing side.

What listeners say about The Germans in Normandy

a different view of Normandy 1944

This book was excellent. I visited Normandy on vacation in 2019, so obviously I am fascinated by this battle history. We went to several battle sites, and we may go again this year. (2020) History is written by the victors, so this book gives the German perspective. Excellent collection of diary accounts of what the soldiers were seeing, from the German side. We deliberately had dinner each night at the English pubs in Bayeux Normandy. Those pubs were full of English history buffs and ex-UK military vets, all sharing battle stories they knew about. We had too much fun bs'n in those pubs. (I got accused of having a thick American accent. I also experienced the most aggressive handshakes imaginable. A lot of beer consumed, and they were all very proud of their military units. I want to go back!) Normandy in the summertime is a great place to vacation, particularly if you are into this subject. Cheers!

Good if you're not familiar

This is a good book if you are not familiar with the events. But if you've seen or read the Longest Day, Patton, Is Paris Burning, and similar movies or books, you will know most of the content. WWII buffs especially will likely find better German perspectives from the many autobiographical books.

This is an excellent history of the other side in the Battle of Normandy. It is marred, however, by a poor narrator. I don't mind English narrators at all; some are excellent. What I do mind, though, are British narrators pronouncing German and French words with a British accent. It's like fingernails on a blackboard. All audiobooks that include non-English words or place-names should require that the narrator be able to pronounce them correctly!

Great to see the battle of Normandy from the German prospective. Everyone suffers in war.

Most informative and a good read.

Over the years I have read many books on WWII. The books I have read, have mostly been from the American or allied point of view. Recently, I’ve started reading books that look on that piece of history from the opponent’s perspective, which makes a more enlightened regard of the subject. This book confirms what I have learned over the years and also add new knowledge to that learning along with dismissing certain myths. Upon reading the last chapter, one major revelation this book has revealed for me is how the allied powers faired in operation Market Garden and where taken completely by surprise in what ended up being called the Battle of the Bulge.

It appeared that the author went to great lengths to justify Montgomery’s performance as a General at Normandy from a British perspective. It was over done! Although it was apparent he was running out of manpower.

I enjoyed the detail of the recollections...I found myself looking skyward for allied fighter bombers.

I was glued to it. Lucky my wife had something to do. She was a WW2 D Day widow for 12 hours.

This is a good narrative of the battle for Normandy. It is not a deep analysis, it focusses on the main personalities on the German side. The narrator is easy to listen to but (frustratingly) he pronounced Lehr (Panzer Lehr) as Leer, rhyming with here. Lehr should rhyme with hair, or in German, Herr

wasn't the best narrator, often couldn't bwork out what was being quoted from a speech or if it was just the general story being told ,bit disappointing really as the intro said it would be alot more personal from a personal perspective but was far more generic .

I’ll start by saying that this is a good book; even if you know your history surrounding D Day this is a decent read being mainly from the German view point which isn’t particularly common.

But the way the narrator does his thing is nothing short if scandalous. The fact that he is quite monotone is one thing to deal with, but his pronunciation of simple French words is appalling. Some examples: Boulogne is Bolonya. Caen is Cannes. Saint Mere Eglise is “Eglaze.” Bayeaux is Bi-yoo. Cotentin is Con-Ten-Tin. It is infuriating!! Surely someone does quality assurance checks with these books, or someone monitors the narrator and can point basic errors out!! Honestly I’m still thinking of returning the book, which would feel like a defeat for me as I am enjoying the story. But I will never buy a book narrated by Chris Macdonnell again. Having just listened to Al Murray narrating Sicily’43 (what a great book) with aplomb, to be brought down to this level would have me tearing my hair out if I wasn’t already follicly challenged.

Please Audible, have a word. This book is not worth the price with the way it has been narrated. I’m not a purist, believe you me, but simple, correct pronunciation is a must with all books.

Update - I couldn’t hack it - book returned. MacDonnell defeated me.