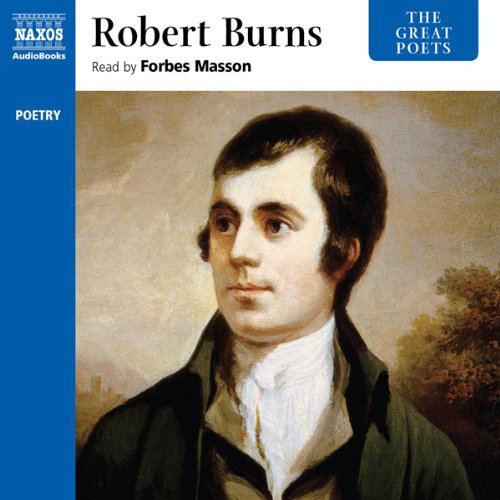 The 250th anniversary of the birth of Robert Burns (1759 - 1796), one of the most popular of poets, was celebrated in 2009. A pioneer of the Romantic movement, works such as "A Red, Red Rose", "A Man’s a Man for a’ That", and the ubiquitous "Auld Lang Syne", have made him an international figure. Naxos AudioBooks’ popular Great Poets series marked the anniversary with this audio, bringing together all the key works.

Actor Forbes Masson is equal to the task of representing his countryman's poetry. This selection of Burns's poetry provides a fine sample of the Scottish Bard's canon, ranging from short songs to long narratives. Masson's pronunciation of the Scots versions of the poems is replete with the sounds only a native speaker can produce. He brings his skill as a performer to the different characters of Burns's poetry, from pensive lovers to social critics. His voice is rich, and his pronunciation of Scots is pitch-perfect. Masson's performances range from the gentle and sweet "Red, Red Rose" to the blistering "Holy Willie's Prayer." All those who celebrate a Burns supper in January will appreciate how Forbes Masson brings Burns to this century.

It's a highly enjoyable selection of poems. Forbes Masson gave an impassioned and expressive rendition. I fell in love with his Scottish accent. I could listen to him for hours. Over and over again.

Forbes Masson is a native Scotsman that I have been priviliged to see on stage for the Royal Shakespeare Company. His expressive natural accent brings Burns to life and his passion in certain key passages opened a new level of Burns to my ears. If you are looking for Burns on audio, this is it. Yes, several words, like Shakespeare, need glossing because Burns injected his poetry with his native Scots dialect. But it's well worth it!

What made the experience of listening to The Great Poets: Robert Burns the most enjoyable?

I only caught every 4th word but it's worth studying so I'll read the poems and listen again. The actor who narrated it had such a good time bringing these works to life.

Forbes Masson gives a wonderfully passionate performance which brings the poetry and songs to life.

loved it. The narrator was perfect and brought it to life. An enjoyable listen for all!