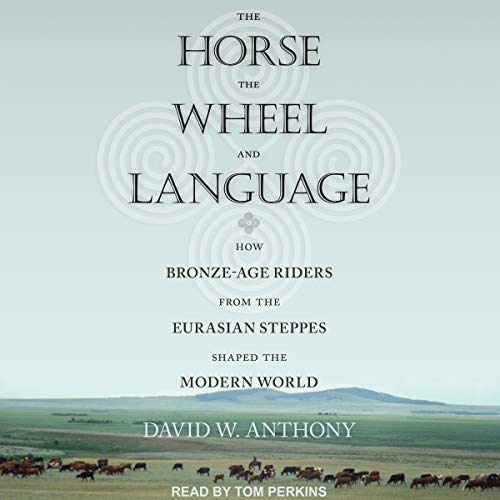 The Horse, the Wheel, and Language

Roughly half the world's population speaks languages derived from a shared linguistic source known as Proto-Indo-European. But who were the early speakers of this ancient mother tongue, and how did they manage to spread it around the globe?

Until now, their identity has remained a tantalizing mystery to linguists, archaeologists, and even Nazis seeking the roots of the Aryan race. The Horse, the Wheel, and Language lifts the veil that has long shrouded these original Indo-European speakers and reveals how their domestication of horses and use of the wheel spread language and transformed civilization.

Linking prehistoric archaeological remains with the development of language, David W. Anthony identifies the prehistoric peoples of Central Eurasia's steppe grasslands as the original speakers of Proto-Indo-European and shows how their innovative use of the ox wagon, horseback riding, and the warrior's chariot turned the Eurasian steppes into a thriving transcontinental corridor of communication, commerce, and cultural exchange.

He explains how they spread their traditions and gave rise to important advances in copper mining, warfare, and patron-client political institutions, thereby ushering in an era of vibrant social change. Anthony also describes his fascinating discovery of how the wear from bits on ancient horse teeth reveals the origins of horseback riding.

The Horse, the Wheel, and Language solves a puzzle that has vexed scholars for two centuries - the source of the Indo-European languages and English - and recovers a magnificent and influential civilization from the past.

What listeners say about The Horse, the Wheel, and Language

I heard it end to end 2 times. The way in which the author has taken the readers / listeners through a journey in time from the Neolithic to the Late bronze age is without parallel. A must read/ hear for any person speaking the Indo European languages

I have had this book at home for several years and did not finish reading it because it is hard to find the time to sit and read. Audiobooks provide a wonderful alternative and I was able to listen/read this excellent book in just a few days.

Please, audible, record more academic books like this one. It makes all the difference to people who want to read serious, non-fiction, archaeology, linguistics, science-related books written by scholars. Unfortunately books of this caliber dealing with a more unique subject are relatively rare here. I usually have to wade through the standard popular subjects and the books written about ancient aliens. For those who find David W. Anthony's writing to be too academic, that is the point. He is presenting academic research. I can't imagine why someone would purchase the book if they wanted a cursory overview of the subject. There is plenty of light weight and popular history on this site from which to choose. Although I did not need the pdf because I already own the book, it covered all the technical information described in the pages dealing with charts.

This subject is all the more fascinating in light of the genetic research that has been revealed since its publication. I recommend further researching his writings online as well as those of David Reich.

Fascinating Stuff, and then...Pots of the Steppes

After some fascinating insights about PIE, the Indo-European languages, and even methodological issues and divides, the book *really* bogs down into comparisons of pots, grave sites, figurines, pots, a few more pots, skeletons, and another eight splashes of pots.

The author is an archaeologist, and that eventually shows. The last third or so of the book seems to reveal that his real interest is in the physical remnants of steppe culture, not their language or its influence. He revels in the artifacts, not really letting non-specialist the reader in on the secret (all that often) of why this vast array of detail is all that relevant to PIE except in broad strokes that he already expressed much earlier. Admittedly, there may be some final chapters left that reintegrate linguistic elements, but I’ve been on the steppes of his pottery and pit grave talk for about 5 hours and I’m not sure I’ll see Zion.

The book is honestly worth it for the first 40% if you’re interested in the root of European languages, hence the 4 stars. Just...be prepared.

This really needs to be read in print. It's fascinating, but academic enough to feel like taking notes/annotating and being able to flip back and forth between pages is necessary to follow the argument he's piecing together. I wound up downloading the ebook about halfway through and using it along with the audiobook.

very well researched. I wanted maps in the PDF. besides the lack of maps it was great.

This book intertwines archeology & linguistics with an exceptionally detailed an compelling description of the origins of info-European language. At times the pace seems tedious, but the rationale and crescendo of evidence that ties everything together at the end makes this story compelling & irrefutable.

The most boring book I ever tried to read

Even though I am a retired language teacher and some interest in linguistics, this book defeats me. It is so boring that I have not been able to finish reading it even though I have tried three times. It starts out well, but then bogs down in Proto-Indo-European linguistics at such great length that I couldn't stand it any more.

Starts off tolerably well but soon turns into what could be considered an interminable doctoral dissertation rather than an approachable account of how civilization developed in a largely overlooked part of the world. It takes a lot of effort to take such an interesting subject and make it excruciatingly boring, but the author does just that by deluging the reader with mind-numbing statistics regarding pottery types and other archaeological minutia that would best confined to a PDF appendix. The book literally runs into the ground about a third of the way in and never recovers. I feel sorry for the narrator.

Overall, the writing style is sterile and academic, to the point of the author referring to his archaeologist spouse by last name (for some reason this irked me). A more personal approach and some judicious pruning of the data would have bumped this title up at least a couple stars.

Good but Dense and Variable and Monotonous

I am dubious about histories of never written languages (as there is a lot of guessing involved) and this is no exception. The arguments are strong, but questionable and unverifiable and seem of questionable practical value.
This book is not mostly about this scholastic language debate. Instead it also looks at the history of the wheel and horses in civilizations.

There is a 33 page PDF associated with the book which is much better than hearing the tables read aloud!
It is mostly too-much-information, except for the appendix regarding some of the issues with carbon dating techniques.

This archaeology is interesting, but dense, and alternates between popularly conversational and dense, abbreviation filled, academic text.

The narration is clear and audio is good, but monotonous (mostly due to the writing).

I definitely read this to the end, and I did learn a few things, but I can't say I enjoyed it a lot.

Very data heavy and dense with archaeological detail. A truly fantastic book can create interest where none exists, and brings a distant culture to life. This book did neither. The point almost got list in the pottery shards. I wouldn’t have made it through this one if not for an intense pre-existing interest. Since I was interested, I survived the litany of Bronze Age grave site descriptions that started to run together. Ultimately worth the effort to pay attention.

Narration: Enunciation clear but unvarying, monotonous rhythm is not much fun and impedes comprehension.

Content: Detailed--actually, turgid--explanations of how Indo-European root languages constitute the foundation from which modern European and central Asian languages emerged.

Potentially profitable for serious language theorists. All others directed to Teaching Company language collections, which cover much of the same material, but which are more accessible to laypersons.

Large parts of this book were unsuited for audio, however the more accessible opening chapters were fascinating. A great effort from the reader as this book must have been hugely difficult to narrate.

In 1786, Sir William Jones noticed the commonalities between Sanskrit and ancient Greek. This led to the recognition of the vast Indo-European language family spoken by 3 billion people today.
The original proto Indo European speakers were pastoral nomads who drove wheeled vehicles, rode domesticated horses and began to use dairy products – a package that was to guarantee their dominance wherever they went. Their migrations were the engine that powered the bronze age.
By combining the insights of historical linguistics with meticulous analysis of archaeological data (available since the end of the cold war) David Anthony describes who these people were and their history.
His conclusions are not so different from the recent powerful insights available from the genetic analysis of ancient DNA described in Who We Are and How We Got Here by David Reich (available on Audible) and more recent papers by Chuan-Chao Wang et al at the Department of Archaeogenetics, Max-Planck Institute
I enjoyed THE HORSE, THE WHEEL, AND LANGUAGE. It is very rigorous however - the sections on pottery were great for falling asleep to

An immensely important accomplishment in this fecund field of philosophy. Not an entirely easy read, but worth your while.

This was too academic for me

I thought this would be really interesting, but I found it difficult to listen, the narrator did not make the subject come to life.

I gave up on it by chapter three, I was very disappointed.

Not a great read. Lots of detail no story.

Not a great read. Lots of detail but no story. More an academic book than one for the likes of me.