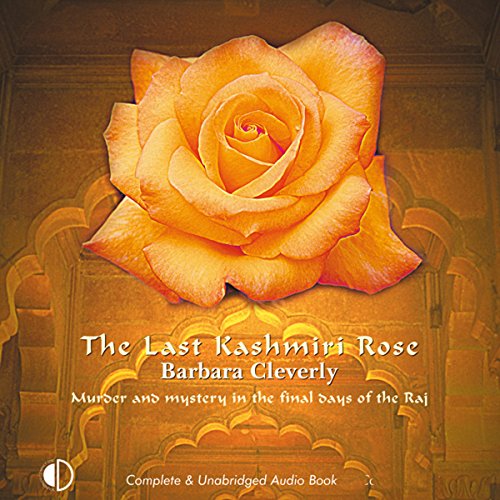 India, 1922. In Panikhat, 50 miles from Calcutta, the wives of officers in the Bengal Greys have been dying violently, one every year and always in March. All the deaths are bizarre and seem accidental. The only link between them is the small red roses that mysteriously appear on the women’s graves on the anniversaries of their deaths.

The first victim perished in a fire, the second was bitten by a cobra, another was thrown off her horse into a ravine, while the fourth drowned. When the fifth, the pretty young wife of Captain Somersham, is found with her wrists cut, the Governor of Bengal refuses to accept a suicide verdict and calls for help from the reluctant Joe Sandilands, currently on secondment to the Bengal police.

What made the experience of listening to The Last Kashmiri Rose the most enjoyable?

The detail in the book was excellent - the descriptions and evocation of both time and place brought the novel to life. I didn't see it had been written by Cleverly, and it felt as though it had been written by a man, such was the description and exchanges between the male characters. There were only three females in the book and two of them were rather weak, the third, Kitty, was excellent (maybe because she was a tough old boot and a matriarchal type who had been running the women in the military station in india for so long she would have no nonsense, and spoke her mind).

What does Terry Wale bring to the story that you wouldn’t experience if you had only read the book?

He had such a clear voice, and it made the parts explaining the Indian honour code (very important to the plot) much easier to understand.

Yes it was. I kept wanting to know what happened next. There were some twists thrown in which made me want to know more!

The only weak point was the sort of romance between two of the main characters, It was not very well drawn, and the descriptions made me squirm a bit (another reason I thought it had been written by a chap!) BUT...it was only a very small part of the book and the episodes flashed by, so did not really detract from the novel overall.

Would you listen to The Last Kashmiri Rose again? Why?

A well presented mystery in a slightly different time - the height of the British Raj. Good sense of time and place.

Excellent new (for me) historical murder mystery. The plot was unusual and yet believable, and what's more, the careful slueth reader has a fair shot at working it out (although it isn't easy).

Excellent story to keep you enthralled

This is the first book in a series and the first I have read. The writer vividly captures the sights, sounds and ways of India and the plot keeps you guessing to the end. Thoroughly enjoyable and I will certainly be listening to more in the series. Also enjoyed the narration by Terry Wale.

WHY the blasted music?

Would you consider the audio edition of The Last Kashmiri Rose to be better than the print version?

NO! I will persist with a couple of the audiobooks for this excellent series. I love everything about EXCEPT the blasted music, I will persist before I turn to printed books, because I enjoy Mr Wale's narration.

What other book might you compare The Last Kashmiri Rose to, and why?

Miss Cleverly writes a great story, I do not know who I would compare this book to, just let it stand on its own merits.

Have you listened to any of Terry Wale’s other performances? How does this one compare?

There were several moments in this book that I found very moving. Look forward to further escapades of Commander Sandilands.

Who are the book hating idiots that persist in putting music into the narration of a book. It distracts from the continuity of the book. If I wanted to listen to music I would.This would have been five stars all around, except for the blasted music.

Period mystery in India between the wars

My first book by Barbara Cleverly, certainly not the last. I thoroughly enjoyed getting to know Joe Sandilands as he investigated a strange series of deaths in an Indian military town in the period before Independence.

An enjoyable, cleverly written gentle who dun it..

A first in the series about Joe Sandilands the Scotland Yard detective on secondment to India at the beginning of the 1920's. 5 mysterious deaths, a close knit community where every one knows every one. India still being ruled by Britain which causes resentment within the native population add some evocative descriptive narrative of India and it makes for a darn good read.

This book Is a gentle flowing story, which admittedly didn't need much brain power to solve the who dun it but it was a refreshing change from my normal guts and gore thrillers. I found the characters to have substance especially the two main protagonists so much so that I will invest a credit on book 2 to see how they get on.