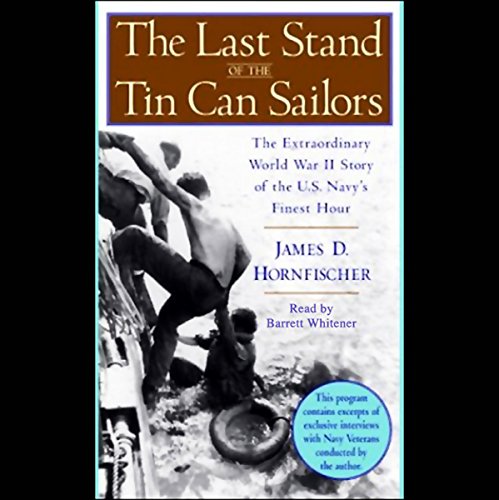 “This will be a fight against overwhelming odds from which survival cannot be expected. We will do what damage we can.”

With these words, Lieutenant Commander Robert W. Copeland addressed the crew of the destroyer escort USS Samuel B. Roberts on the morning of October 25, 1944, off the Philippine Island of Samar. On the horizon loomed the mightiest ships of the Japanese navy, a massive fleet that represented the last hope of a staggering empire. All that stood between it and Douglas MacArthur’ s vulnerable invasion force were the Roberts and the other small ships of a tiny American flotilla poised to charge into history.

In the tradition of the number-one New York Times best seller Flags of Our Fathers, James D. Hornfischer paints an unprecedented portrait of the Battle of Samar, a naval engagement unlike any other in US history - and captures with unforgettable intensity the men, the strategies, and the sacrifices that turned certain defeat into a legendary victory.

Praise for The Last Stand of the Tin Can Sailors

“One of the finest WWII naval action narratives in recent years, this book follows in the footsteps of Flags of Our Fathers.... Exalting American sailors and pilots as they richly deserve.... Reads like a very good action novel.” (Publishers Weekly)

“Hornfischer is a powerful stylist whose explanations are clear as well as memorable.... A dire survival-at-sea saga.” (Denver Post)

“In The Last Stand of the Tin Can Sailors, James Hornfischer drops you right into the middle of this raging battle, with 5-inch guns blazing, torpedoes detonating and Navy fliers dive-bombing.... The overall story of the battle is one of American guts, glory and heroic sacrifice.” (Omaha World Herald)

"Readable from beginning to end, this popular history magnificently brings to life men and times that may seem almost as remote as Trafalgar to many in the early twenty-first century....One of the finest World War II volumes to appear in years." (Booklist)

I have been listening to audo books for quite a while now and this is by far one of the best I have ever heard. The narrator adds dimension to the book that a reader could not possibly generate. This is a truly wonderful story, not just about a great battle, but of great people. It transcends a war story and really is a story of bravery and courage. Needless to say I highly recommend it. The listener will definitely not be disappointed. The only down side is that some of the chapters are long and you will find it hard to get out of the car when you get to the office! :)

A tough read, but an amazing, well read story

The author dug deep and put together an amazing true story, one that any person interested in World War II history should read. I agree that, sometimes, there was too much detail; but, one gets an amazing impression of battle, heroism and, most importantly, the stupidity of war.

I wish the author had written with stricter chronology in mind. On multiple occasions, the same ship sunk several times. It would have been better if each ship that sunk were described as sinking only once, with all related details chronologically related at all once.

In all, however, this is an unforgettable book. It was worth the sometimes-struggle to get through it.

The more I read about the war in the Pacific and the more I talk to the men who lived throught that nightmare the more I really apprieciate what they did for me. It is hard to imagine the horror those boys lived through and most of them were only young boys. They sure didn't stay boys for long. They became men in a matter of minutes. Very nice work by Mr. Hornfischer,

Don't Miss This One!

This is an EXCITING story! I was only casually familiar with this fierce battle before I read the book. Now I am sorry that I did not learn the full story sooner. The author has gathered an extensive library of facts and eyewitness accounts of the incredible bravery of our sailors. The biographical sketches at the beginning of the story seem a little long, but do offer good insight into the character of these valiant men. Then, when the battle is joined, I could not stop listening until the end. One can only stand in awe of their bravery.

The Last Stand of the Tin Can Sailors

An Excellent true story depicting the David versus Goliath naval battle in 1944 Philipines.
Author James Hornfischer provides outstanding insight into the lives of our heroic sailors. He provides deep background information as to how Admiral Halsey got caught between a rock and a hard place. Most readers will broaden their WWII knowledge after reading/listening to this book.

While the author sometimes gets hung up with details that lend little to the heart of this book, the story itself leaves the listener in awe of the bravery shown by the sailors of the United States Navy's Task Force Taffy in the 1944 Battle of the Samar. This is non-fiction history that is as exciting as any adventure novel.

Though the beginning of this book left me dizzy with the nonstop barrage of facts, it evened out into a fantastic, truly unbelievable story. Highly recommended.

This book is an unusual blend of nail-biting excitement and well-developed characters that seem normal like your friend or next-door neighbor. Most of the heros here are rather typical sailors until they find it within themselves to rise to a level of bravery that few of them could have probably believed themselves capable.
Other reviewers have complained about the detail into the participants' backgrounds. I, on the other hand, feel that these sketches make the characters seem real and that the sailors almost become friends.
The reader does an excellent job. He is always easy to listen to and has a natural voice for this type story.
Great book!

What did you love best about The Last Stand of the Tin Can Sailors?

The story and detail was so vivid I felt like a lost my comrades.

What was one of the most memorable moments of The Last Stand of the Tin Can Sailors?

The Navy battlefield is a ghost after the battle; it disappears under the sea.

MUCH much better than the book on the Bismark. That one was so bad I got my money back. This one is GREAT.

Very glad I read this book and very glad it was written. I had little idea this sea battle was one of the greatest in US Naval history. First heard about it on the History Channel. I liked the narrator too. Excellent prose save the story from the recitation of simple cold hard facts. The technical details are informative yet not belaboring. Thank you James Hornfischer and Barrett Whitener

Excellent book slightly let down by the reader.

A real sailors eye view of the action off Samar. If you're interested in the war in the Pacific you should definitely buy this book. The only fly in the ointment for me was the voice of the reader, sounded very flat, almost robotic in his intonation.