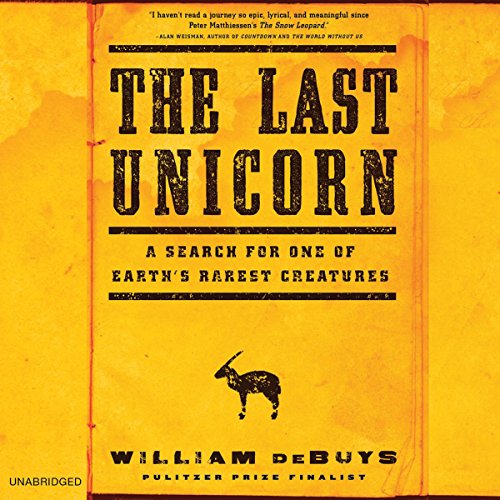 An award-winning author's stirring quest to find and understand an elusive and exceptionally rare species in the heart of Southeast Asia's jungles.

In 1992, in a remote mountain range, a team of scientists discovered the remains of an unusual animal with beautiful, long horns. It turned out to be a living species new to Western science - a saola, the first large land mammal discovered in 50 years.

Rare then and rarer now, no Westerner had glimpsed a live saola in the wild before Pulitzer Prize finalist and nature writer William deBuys and conservation biologist William Robichaud set off to search for it in the wilds of central Laos. The team endured a punishing trek, up and down whitewater rivers and through mountainous terrain ribboned with the snare lines of armed poachers.

In the tradition of Bruce Chatwin, Colin Thubron, and Peter Matthiessen, The Last Unicorn is deBuys' look deep into one of the world's most remote places. As in the pursuit of the unicorn, the journey ultimately becomes a quest for the essence of wildness in nature and an encounter with beauty.

Exciting title but that is all!

Tried to give this book a chance a listened to 3/4 waiting for some sort of quality story. I'm not even sure what to call. Rambling and mediocre come to mind. Don't waste your credit like I did!