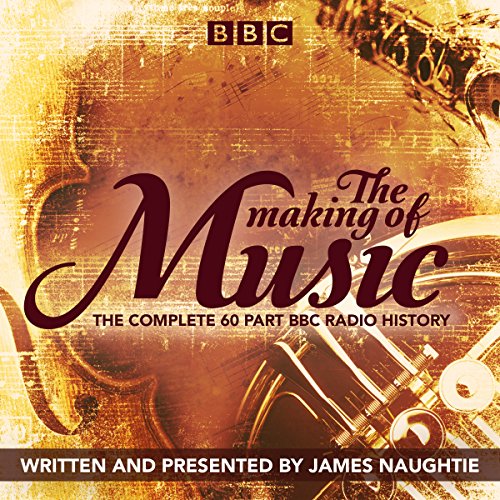 The Making of Music

In this major BBC Radio 4 series, James Naughtie uncovers the roots of our music and reveals the soundtrack to our own history.

The history of classical music is inextricably linked with the places it was written, its purpose and its patrons as well as with politics, war and social change. From the earliest music of the monasteries to the court and church music of the Renaissance and Reformation and beyond, composers have always changed with the times.

In these programmes James Naughtie reveals how the chance happenings of history built a classical tradition that tells a glittering and inspiring story. His journey takes him from early beginnings to the present day, where he examines the current state of classical music.

This epic and important series features extracts from the music itself as well as the voices of Benedict Cumberbatch, Alison Carney, Laurence Fox and Simon Russell Beale alongside James Naughtie's own.

What listeners say about The Making of Music

This is simply extraordinary for the simple, clear way that James Naughtie covers the history of music. He ties music to historical, social and political developments, as well as to musical personalities and other influences of each age. This is all done in about 15 minute segments, which makes sense since it was a BBC series originally. Highly recommended and it is something that may just live on my iPod for occasional listening.

this is an exciting and exceptional book. beautifully written,narrated and produced... with some amazing music of course

Fantastic audio, made to be listened to

I enjoyed this production so much and learned so much. Naughtie takes the listener through the history of music from the very beginning right up to date, and he illustrates it with excepts of the music he is talking about, so unlike a book you actually get to hear the music. I really enjoyed this history, and the music extracts, and made notes of the music that I wanted to hear more of. I especially enjoyed his analysis of the development of music in the twentieth century. The series was originally on Radio 4 in the UK.

I loved this so much. Put things into a context. Must listen again and then I’ll be ready for University Challenge music questions!

Fantastic history of Western music with interesting discussion and clips of great recordings.

Wow just got through this 13h 27mins audiobook from 2007 ‘The Making of Music’ written and narrated by James Naughtie for the BBC.

Fantastic history of Western music with interesting discussion and clips of great recordings. It’s meant for general music fans not composers but a great way to catch up on what you’ve missed in the last thousand years 🙂

Magnificent, knowledgeable and very full coverage of the vast range of music from earliest development to the present age, so well illustrated by excellent audio samples (vital, in my view in this kind of book, and fitting so well as an audio book). A joy! I need to listen to it all over again ( in many sittings as the first time)!

Couldn't get into this, despite giving it three hours. I've previously listened to other audiobooks on classical music, and there'll be some of the author's personality or expertise clear in their narration, but this was so dry, just a list of things that happened with music in between. The most tedious audiobook/book I've ever endeavoured to listen to/read.

A brilliant piece of work.

James Naughtie has written and presented a masterwork with this audiobook. It warrants repeated listening because its title is somewhat simplistic. There is a vast amount of history included to help explain how the music was a product of not just the composer and or the player but the time in which it was first composed and performed. There is a fine degree of chronology here that traces many centuries of political, social and technological change and development, and the musical examples chosen mesh superbly with James Naughtie's narrative that is informative, superbly knowledgeable and never contains two words when one will suffice.

If you want the history of music, you got it!

There is not much to say. History can be told in many ways, which is also true for the history of music, but the way that western music is told her, I think that I have gotten something that is really close to the truth. I really like this book, and if you want to know more about music history, chances are you will to!