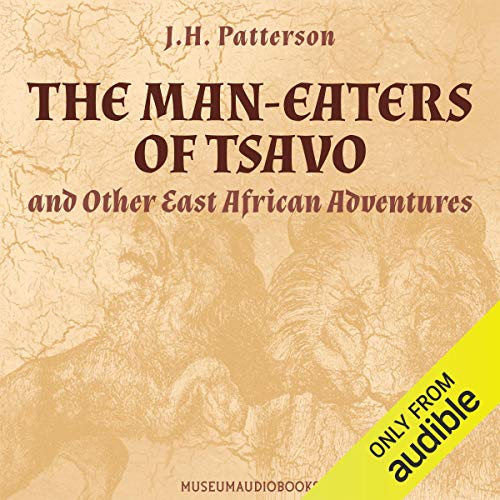 In 1898, the British were building a railway line between Mombasa in Kenya and Uganda. At the Tsavo River in Kenya where a bridge needed to be built, the project was suddenly interrupted by two man-eating lions that targeted the camps of the workers. Over a period of about nine months, the lions killed scores of people.

These lions were deliberately hunting people, preferring humans over any other prey, and they seemed to have supernatural abilities in evading all attempts to stop them. Colonel J.H. Patterson, the chief engineer in charge of the project, finally managed to eliminate them. "The Man-Eaters of Tsavo" is his riveting account of the events, in the first part of the book. The rest of the work describes various hunting expeditions in East Africa. The story of the man-eating lions has been adapted to film three times, the most recent being The Ghost and the Darkness of 1996.

What listeners say about The Man-Eaters of Tsavo, and Other East African Adventures

The events may be over a century old, but the adventure is very exciting, the people brave, and the colonization of East Africa at or near its height. The stories are presented in a manner that allows you to walk with the characters and feel their experience in your heart, your mind, and at times, through the hair raising on the back of your neck.

The narrator is horrible! Weird pauses and mispronunciation of commonplace words make this virtually impossible to listen to. After looking at reviews of other books this person narrated, it appears to be a theme with him. Sad that a book I was excited to find on Audible was completely ruined by an inept “narrator”!
I found myself wishing that this person had been eaten by the lions on the first page!

A classic African account that is absolutely worth reading. However, this reader butchers the story. At several points I thought this was some sort of text-to-voice software instead of a living person because of the monotone sound and mispronunciations. At other times the reader breaks away from this pattern and attempts to affect some stereotypical accents that do not help with the overall presentation. I apologize if this critique is harsh but this is a beloved story that is not done justice by this shameful performance.

the direct accounts of the man eaters is exciting and the story afterwards is enlightening.
glad I bought it.

This story is amazing. And the author himself seems fearless. The main story is only about a third or fourth of the book, but definitely worth the READ. Go out and buy this one. It’s an an interesting story that is hard to listen to due to the narrator. Keep in mind the time this was written, some things may seem shocking. It was just the time period though.

Narrator made it impossible to listen too..

Such a great book that was ruined in my opinion of the narrator, he added his own inflections that drove to the point where I just couldn’t listen anymore...

More of a journal of an extended hunting trip than anything else. I knew better than to expect anything like the movie but still, expected more.

This book is written by a British man and narrated by a man with an American accent. I don’t think it was the narrator’s fault his performance was bad, it was the fault of whoever selected him for this particular book.

The narrator does not have a good command of the english language. There were many grossly mispronounced worda, and his pausing was haphazard and not in response to punctuation. He read with feeling, but the odd pauses and mispronounciations werr grating...

Always enjoy books about Africa, especially wild Africa. However, waaayy too much emphasis on shooting lions and other game for sport. Realize this was a different time but still can’t understand how someone could go out and shoot these animals, especially lions, just for fun.

Why oh why is an American reading this story? Patterson was British! It totally destroys the viability of the story.

The man eaters story is rather entertaining. It's quite amazing how cheap the Indian workers were to them, that they allowed so many to be killed. The main character kills any animal he can daily, taking his gun everywhere and shooting at everything. If all the colonialists were like that, which I think they were, it's no wonder there is not much left today. Mankind is the problem on this planet. The sooner he's gone the sooner this planet recovers