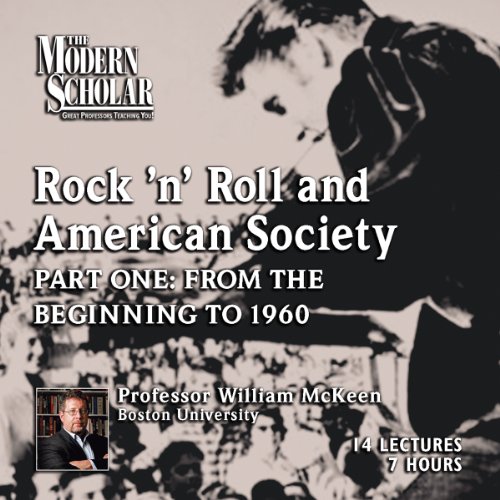 An author and university professor whose books include scholarly works on the Beatles and Bob Dylan, William McKeen here tackles the role of popular music in American culture. Beginning with the emergence of rock in the 1950s, and including the meteoric rise of artists such as Elvis Presley and Chuck Berry, McKeen examines the growth of the recording industry while incorporating the social and intellectual history of the country.

What listeners say about The Modern Scholar: Rock 'n' Roll and American Society: Part One

Informative But Factually Flawed In Some Respects

The author describes the roots of Rock 'n Roll from the time of Charlie Patton forward to 1960s. There is the obligatory nod to Robert Johnson. Various genres of music from blues to country to gospel have an influence on an emerging musical format. In addition to artists like Chuck Berry, Elvis Presley, Bo Diddly, Buddy Holly, there is coverage of DJ's, record producers, songwriters, and managers who are described in this account. The lecturer often indicates the influence particular musicians had on those who followed.

What other book might you compare The Modern Scholar: Rock 'n' Roll and American Society: Part One to and why?

Any collection of articles by Lester Bangs. Audible has many biographies and autobiographies of musicians.

The author and narrator are the same and the presentation is in lecture format. The lecturer is polished and easy to follow.

A movie could probably not be made of this subject.

Audible usually provides an accompanying booklet in PDF for with a Modern Scholar title but fails to do so here.The lecturer makes some grating errors and omissions. Johnny Cash did not put tissue paper under the strings of his guitar to achieve his sound. Country music of that era did not feature drums so Cash would put regular paper under his guitar strings to mimic the snap of a snare drum. Les Paul is mentioned as a pioneer who made electric guitars and experimented with multi-track recording. However, completely unmentioned was Leo Fender who had a far greater influence. Leo Fender made the first electric bass guitars that truly give rock music its drive and its rhythm. His Stratocasters and Telecasters are used by more musicians than Les Paul guitars. Finally, Leo Fender made wonderful amplifiers to suit the needs of musicians, including the need for distortion and reverb.

I am extremely impressed with this audio book and will be recommending it to my students. The author takes the time to pay homage to many lesser known artists and musicians who laid the foundation of what we now know as rock and roll. Musicians like Charlie Patton, Jelly Roll Morton, and Son House, as well as promoters Alan Lomax, and John Hammond to name a few.
He also examines the role that segregation and racial predgudice in the evolution of this music; which seems to be conveniently left out most histories of rock.

I've been listening to rock since I was 12, back then I had a Guns n' Roses poster pinned to my bedroom door. My listening zone usually includes bands from the 70s, 80s and 90s. So I really missed out on the Rock 'n' Roll artists of the 50s and 60s. Personally, the lecture proved to be informative in terms of Rock 'n' Roll pioneers and racial barriers that Rock helped to break down.
Being Part 1 of the three-lecture series, it serves as a springboard for further studies into the history of Rock. The narration was good and personal at times, but too laid back for me.
P. S. Since there is no PDF accompanying the lecture, I had to search the Internet to download one.

Audible In General - One Star

1. The books so far (from credits) are hard to follow. The one I returned, I couldn't grasp what the author was talking about. 2. The book I kept was very repetitive by the lecturer and besides I knew most of the material (that's on me, though). I listened to the entire lecture but wondering if I could swap it anyway. 3. Audiobooks are new for me and I find they require undivided attention. I am having trouble with that. 4. The programs are expensive by comparison to the Kindle versions. One of them is $8.00 difference! 5. The Windows 10-64 app crashes at times, when synchronizing between devices. 6. My review caused the app to crash as well. 7. When my trial is over I will probably cancel the membership.

While I suppose most of what the author presents is factual, or at least accepted fact, without samples of the music he's pontificating on this is pretty much pointless. How hard it expensive would it have been to add the samples? As an audio book this falls far from the mark. Don't bother.