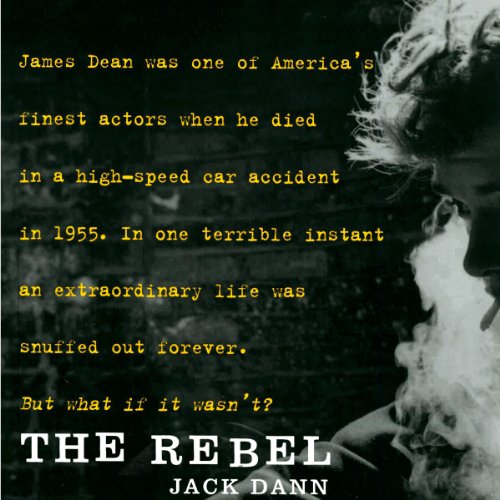 A movie star on a meteoric rise, young James Dean was already being hailed as one of America's finest actors when he died in a high-speed car accident in 1955. In one terrible instant a luminous future glowing with extraordinary promise was snuffed out forever. But what if it wasn't?

With The Rebel, acclaimed award-winning author Jack Dann pulls James Dean from the twisted wreckage and offers him a second chance to make an indelible mark on his art, his culture, and his time in an era of profound change and devastating social upheaval.

Surviving the horrific crash that leaves him permanently scarred, both physically and emotionally, the rebellious young star approaches his rebirth with trepidation, charged with an inescapable new responsibility to do "something wonderful and important". Cast back into a world of Hollywood glitz and glamour, a haunted, brooding, and complex artist climbs higher than even his most fervent admirers imagined he could, ascending to a pinnacle of success and power no actor of his or any generation has ever achieved. Yet for Jimmy Dean, the glory road will be winding and broken, littered with the detritus of exploded dreams and destroyed love, as it passes through the holiest cultural sites of postwar 20th-century America - the genius-and-drug-pumped world of the Beats, the protected inner sanctum of Graceland, the darkest shadows of Camelot. The lives and futures of Kerouac, Sinatra, Elvis and the Colonel, and the Kennedys will all be touched by him - yet perhaps none so deeply as the fragile sex goddess who will always be his greatest burden and true soul mate, a dazzling and tragically lost phenomenon named Marilyn - as he moves relentlessly toward an astonishing destiny that will reconfigure the world.

Ingeniously blending historical fact with brilliant invention, The Rebel is a hip, fast, mesmerizing ride through the '50s and '60s - an unforgettable road trip across a nation torn by bitter racial strife and violently divided by war, with an American legend at the wheel.

What listeners say about The Rebel