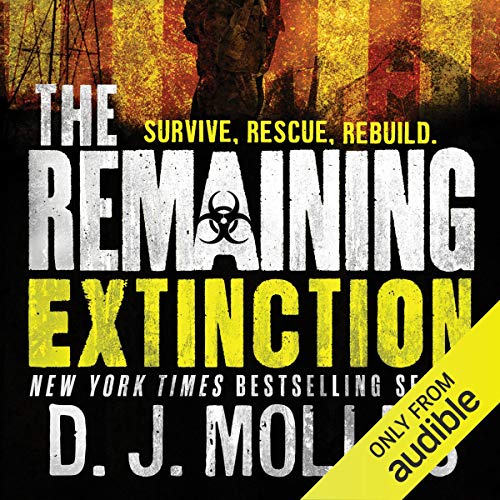 This is the sixth and final novel in the action-packed series following Special Forces captain Lee Harden and a group of survivors struggling to survive while rebuilding an America devastated by a bacterium that has turned 90 percent of the population into a ravenous horde.

The merciless tide of infected is flooding south, and time is running out to stop them. Bolstered by new allies, Captain Lee Harden continues his struggle to establish a safe haven from which the embers of a shattered society can be rekindled.

What listeners say about The Remaining: Extinction

This final book in The Remaining Saga is excellent! Action packed, and brings the story to a good end. Though I wouldn't be surprised to see a sequel series in a few years where we see what happens after...

An amazing ending to this great series.

The final book in “The Remaining” series delivers non-stop action and thrills. If you’re looking for zombie action which will keep you on the edge of your seat this book is right up your alley. “Extinction” is well written and well thought out. The book brings the story to a fitting end and while it doesn’t tie up every single loose thread it wraps up enough for you to let it go, while allowing the author to pick it up at some point in the future should he wish to do so. I can’t say enough about how much I enjoyed the series and this book.

Mr. Rummel brings this series to life. His narration, voices and pacing are just what you would want in this type of book. He really adds to the enjoyment.

I recommend the whole series. It is well thought out and very well written. It grabbed my attention and I couldn't wait for the next book.

Can't stop listening to these books

Right from the first chapter you are sucked into the story as tragedy after tragedy unfolds. Just can't stop listening to any of these books, thankfully they are very long. This book has so much in it, it's worth 4-5 mediocre books. It's so much I can't really say anything, just that the zombies are coming and the humans are killing each other!

I'd love to see another addition to this story line. Fighting to reunite the two halves of America while taking down president Briggs tyrannical regime. All the while fighting off the more evolved hunters. Will there be more scientific advances on the infected? Will the continue to evolve? So many places for Captain Lee Hardin and his battle hardened warriors to take this story. We're not done yet!!!!

Good book but more od the same nothing new just on a larger scale and it feels unfinished.

DJ Molles is such a master of the written word! The plot twists, the descriptions, the way he a pretty crazy concept believable enough for a non-sci-fi fan to (REALLY) enjoy... I just can't say enough good things!

I won't say much more, since you are already wasting your time reading this instead of buying and listening to the series, but I have to comment on the ending, since this is the last book in the series... IF I thought that DJ Molles was done writing in this world of The Remaining, I would be upset; there are just too many questions left unanswered, too many loose ends. I HOPE this means Molles is going to return to it after a short break. =)

Buy this series now. You won't regret it.

Hate to see this series end. May be the best of the genre. Certainly worth the effort.

solid story for the series

easy to listen, writer has a good military understanding, realistic scenarios, thanks for this book and the series

I loved this series.

I am Sad to have finished the last book today. Very well written series. I could really relate to to the characters.

Loved it. A great finale to the series.

Great finale. Only blip was when Lee put everything in jeopardy to save a couple of people whose importance didn't merit it. But overall it was heart in the mouth stuff and I thoroughly enjoyed it. It's certainly not your run of the mill zombie book, in fact they don't appear much at all but are always the menace in the background of the fight for survival. Highly recommend

A Good Conclusion But With Too Many Loose Ends

This book represents a well managed conclusion to the series whilst avoiding the pacing problems of the preceding book (which was more of a vehicle to set up the events of this book than a book in it's own right). Instead this book rockets along and rarely deviates from the headlong rush to the finale.

However, without going into specifics, I have one major issue with the book and that is that whilst the book concludes several of the long-running storylines many others are left more or less entirely unresolved. I assume this is so the author can return to the series in the future or write a spin-off novel but it is still somewhat irritating as this book is pitched as the "final novel". However,I will admit that the parts that are concluded are done so in a more or less satisfying way.

Further, the characters seemed to occasionally act against their previously established personalities at times but it is not too common and over-all (with one exception) it was not enough to break my immersion in the book.

Criticisms aside I enjoyed the novel and in general it represents a good finale to the series. I assume we will be seeing Captain Lee Harden again because, as we know, he hates to leave loose ends...

Christian Rummel does a good job of narrating the novel as always.

this is the last one in the series but i found it the hardest to get into. For me there was too much introspection from a couple of the main characters. I found it boring at times. Having said that, it did build into a tense and thrilling climax which was gripping. i found myself wantimg to forward on to see what happened. I stuck with it though. Overall i've really enjoyed the series.

3rd time I've listened to this and still love it!

listened to all 6 parts of the Remaining 3 times now and enjoy it every time.

I really liked this whole series, it's well written and narrated and you get fully immersed in the world and the characters lives.
Kind of glad to have reached a conclusion but I would love to hear more
Either following on or with different characters in the same world.

Enjoyed this series. A bit sad when it was finished, as I had grown attached to various characters.
I enjoy audible books, and highly recommend this series.
Enjoyed the writing, characters and the narration.
If you want to know more, then look at the first book, you will be hooked.

I got totally hooked

The whole series was great. I am gutted there are no others to listen too! Well done to author.

I loved the series
felt the emotions
For the Characters
well Read Mr Rummell !

I have listened to the whole series twice in a row. I can't get enough! Great story and very well performed. The only disappointing thing is that there are only 6 books in the series, I want more!

Best book i have ever had

I can't begin to say how much I enjoyed the remaining, I am only upset it's over.