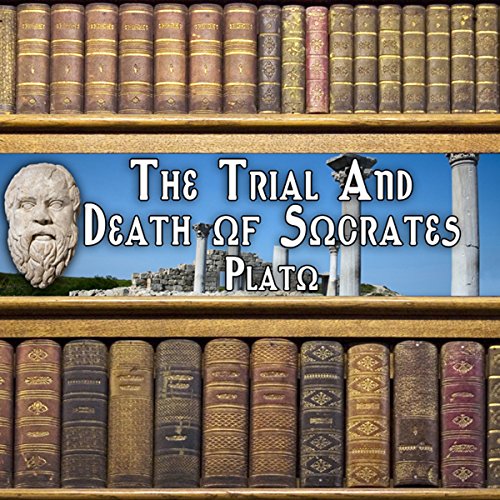 The Trial and Death of Socrates presents the trial and subsequent execution of Socrates in 399 BCE. Socrates was tried on the basis of two ambiguous charges: corrupting the youth and impiety. “Euthyphro”, one of Plato's early dialogues, takes place during the weeks leading up to Socrates' trial. “Apology” is Plato's version of the speech given by Socrates as he defends himself against the charges of being a man "who corrupted the young, refused to worship the gods, and created new deities". “Crito”, a short dialogue by Plato, is a conversation between Socrates and his wealthy friend Crito regarding justice, injustice, and the appropriate response to injustice. “Phaedo”, depicts the death of Socrates, and is Plato's last dialogue covering Socrates’ final days.

What listeners say about The Trial and Death of Socrates

I haven't done much Plato since my college years. I loved the Apology, and the first 2/3 of Phaedo and I enjoyed the rest (Euthyphro, Crito, and end of Phaedo). I loved coming across phrases and quotes that I've heard again and again: "The unexamined life is not worth living... is there not one true coin, for which all things ought to exchange?--and that is wisdom... As for me, all I know is that I know nothing..." Amen.

This was the most understandable means of absorbing Plato's dialogues that I have encountered. The reader is very good at playing Socrates as the lovable curmudgeon. The only thing that could have improved this was to have other actors play the other parts. I was sometimes confused as to who was speaking. In summary it was more like listening to a conversation than reading a dry book on philosophy.

Excellent narration of a difficult genre

Would you listen to The Trial and Death of Socrates again? Why?

This is a genre that Plato has almost entirely to himself. It's not quite drama, not quite short story, and not quite nonfiction. I wasn't sure how it would work on audio, but Dick Hill did an amazing job bringing these classics to life.

Would you listen to The Trial and Death of Socrates again? Why?

Yes, I have listened to this book several times. Dick Hill's enactment of Socrates engages the listener and holds the attention.

What other book might you compare The Trial and Death of Socrates to and why?

Yes. To understand Socrates and understand about how his philosophy relates to how we live today.

The way he read the character of Socrates.

How it relates to today.

I didnt want to miss a word of this book!!!

I took my time with this book cos I didnt want to miss a word. A book I will be listening too again and again...