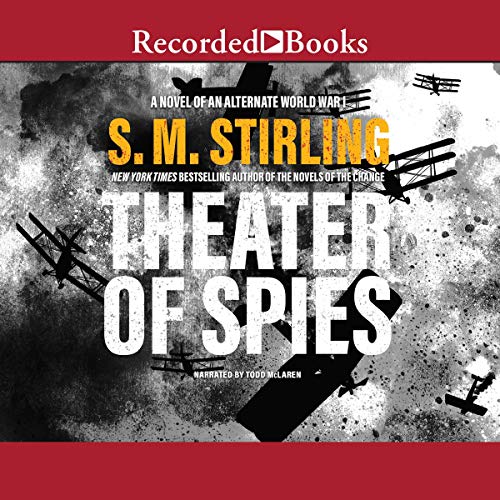 The second novel in an alternate history series where Teddy Roosevelt is president once more right before WWI breaks out, and on his side is the Black Chamber, a secret spy network watching America's back.

After foiling a German plot to devastate America's coastal cities from Boston to Galveston, crack Black Chamber agent Luz O'Malley and budding technical genius Ciara Whelan go to California to recuperate. But their well-deserved rest is cut short by the discovery of a diabolical new weapon that could give the German Imperial Navy command of the North Sea.

Luz and Ciara must go deep undercover and travel across a world at war, and live under false identities in Berlin itself to ferret out the project's secrets. Close on their trail is the dangerous German agent codenamed Imperial Sword, who is determined to get his revenge, and a band of assault-rifle equipped stormtroopers, led by the murderously efficient killer Ernst Rohm. From knife-and-pistol duels on airships to the horrors of the poison-gas factories to harrowing marine battles in the North Sea, the fight continues - with a world as the prize.

What listeners say about Theater of Spies

As usual Stirling has proven himself to be one of the top ten authors. The narration was excellent.

Lots of suspence, but too much romance

This is a well written book by an author that I hold in high esteem. In most ways this book lived up to my expectations of the authors books. My problem with this book is that at some points in the book I thought I was reading a romance novel and not a book written by S.M. Stirling. The plot was entertaining and engrossing, but it would have been much better witout the side trips into the romance realm. I am hoping that the next book in the series adjusts and is back to the books I have read from the author in the past.

Pros: Great characters and action. Cons: Exhausting, bordering on pretentious detail (especially with food for some reason). Still, Stirling fascinates with his world building. McLaren does well as reader, except unfortunately with his two female protagonists. Luz sounds wooden and Kira sounds asthmatic.