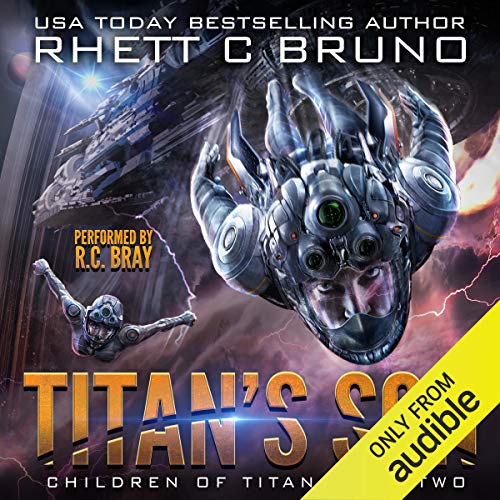 Titan's war for freedom rages in the shadows. But to claim it, they'll need a leader.

Kale Drayton knows his place. As a Ringer born on Titan, he's used to keeping his head down and his mouth shut--no matter how much the Earthers abuse him or his own kind berate him. So, when he's caught stealing from a wealthy merchant, he's lucky to be sentenced to low-paying maintenance work on a gas-harvesting ship instead of life in a cell... or worse.

But when his mother is quarantined, Kale finds himself backed into a corner. To pay for her medicine, he needs money--the kind of money he'll never make sweeping floors and cleaning ships. When he receives a mysterious offer asking him to do a simple job in exchange for his mother's treatment, Kale takes a chance once more. All he must do is upload a program onto his employer's ship and all of his problems will disappear.

What starts as a straightforward smuggling gig soon reveals its shattering repercussions. The people who hired Kale are more dangerous than he suspected -and he's more important to them than he ever could have imagined.

Grab the exciting sequel to Titanborn, which will transport you to the other side of the conflict on Titan, and the Ringers' fight for independence.

“A relentless sci-fi thriller with characters that leap off the page and a chilling ending that will leave you breathless.” (Nicholas Sansbury Smith, USA Today best-selling author of Hell Divers and the Extinction Cycle series)

What listeners say about Titan's Son

I loved Titan Born with the gritty crime drama of Malcolm hunting down the terrorists. This sequel was even better. Not only is it a great sci-fi story with lots of action and a “what-if” future, but it really helped me to think about the other side of the narrative. Just because a group are branded a certain way doesn’t mean that those doing the branding are right. Maybe they have more to lose by everyone being treated humanely than if they subjugate an entire class of people.

RC Bray is amazing with his narration as always

Rhett C Bruno wrote a very engaging story here. and RC knocks it out of the park with his narration again.

This series keeps getting better!

This is book 2 in the Children of Titan series. Book 1 was outstanding, and this one is much better. I highly recommend listening to book one first. Kale Drayton's roll in this story is not what I expected at all after book one. With the responsibility he takes on, you forget how young he really is. This dystopian world takes place on Saturn's moon, Titan long after most of humanity was wiped out on Earth by a meteor.
Great narration by R.C. Bray! He always delivers a flawless narration with many different character voices and accents.
Can't wait for book 3!

so far so good!

i like the way the first book paint the picture of the titan born in a negative light, but the second book provide a story from a different lens. can't wait to read book three!

This story runs concurrently with Titanborn. It follows Kale Drayton as he goes from second-class citizen of Titan to unwitting member of the rebellion to bigger things.

Very entertaining series with a interesting plot. Performance by RC Bray is spectacular as always

The other side of the coin

Titan series continues to Impress. Flip the picture for this story. I enjoyed seeing the other side of the plot and I look forward to more in the series.

kale is the man I like the struggle that is between the two sides of the table. a must read.

Slow start, but sets the series up nicely...

I hate backstory, even when the it's relevant. I would have preferred this story told in parallel with Titanborn. As it is, I had to push through the first 75% before the excitement started to build.
Having said that, you'll have to power through as well if you want to continue with the series.

Yet another cool story from the titan universe, in this politics play a big part as we see just why the events of Book 1 unfolded. With another new set of characters to meet and some more history of Malcolm's to come across this sets the grit in even deeper , a great listen and one I'm more than happy to reccommend. Rc Bray suits this story and his voice works very well especially after the initial audio. Cant wait for books 3 and 4 to come out if only so I can then have some great looking audio covers and even more time to listen and enjoy.

Worth every penny and much much more!

When I was a soldier I tried to put my feet in my enemy’s shoes to understand them and I realized that they thought that we are the bad guys because that’s what they’ve been taught , exactly what we have been told and believed.
What I’m trying to say is that there are two sides to the same coin and the Author Rhett C. Bruno understand it enough to show us with this beautiful series how true it is, he also understand that wars are also about power, control and money.
Bruno have translated all this beautifully written into this amazing series.
Excellent Science-fiction beautifully written, The characters are so real that you just can’t connect or understand them all, that’s not easily done but Bruno have and perfectly so.
Once again one of the best if not the best R.C. Bray have narrated this audiobook perfectly and as usual got it spot on with each character!

And now comes the suffering part of waiting for the continuation ( still worth the wait ).

Absolutely full heartedly without a doubt recommended for all.
Guaranteed.

Titan's Son, formerly titled Ice to Ashes, does not follow on from where Titanborn finished. instead, it overlaps with, and interweaves into, that also excellent story providing depth and greater understanding by, in effect, giving the 'other side'..A young man, a Ringer and former thief, desperate for cash to provide good quarantine conditions for his sick mother, is recruited mysteriously to take a package aboard an old gas harvester ship on which he had worked for the previous two years. Who had requested this he didn't know, nor could he tell what was in the package or why he was to deliver it. But he needed the credits desperately ...

Beautifully written, this book is a joy, exciting, with good characterisations of people to care about. Rhett Bruno has become one of my favourite authors on the strength of this book alone. Highly recommended as, too, is the also stand alone companion story, Titanborn.
New edition, New name, New format: audiobook.
Titan's Son, is still as thrilling and vibrantly exciting as the first time I read it many months ago. In fact, it's even better with the excellent narration of R.C.Bray breathing even more life (if that is possible) into the already well developed characters with individual voicing for each. He also reads the story to perfection, his gentle voice following the tensions of the text and the excitements as they occur without taking anything away from the beauty of Rhett C.Bruno's writing. A perfect pairing of Author and narrator.

This time, I have read the first two books of the trilogy in the order given ( this being book two) but it still remains the same as before - read book one, Titanborn, first, or this one. doesn't matter. Both illuminate the other and yet stand completely apart. But whichever order you choose, if you have any fondness for science fiction, or strong characters in an uncomfortable world emotionally stretched almost to the limit, or excitement, thrills, adventure, and imaginative writing, read them.
Just read them.

I'm literally addicted to this series.

This is gritty, relatable sci-fi. Free from any of the pomp and pointlessly complex noise that you can often get in this genre.

Fast-paced, intriguing, disturbing, enthralling, heart wrenching, pulse-quickening... need I say more? This is awesome. An impressive second title to a brilliant first. The writing and the performance are both in a league of their own. (inser chefs kiss meme here)

I'm so excited to go get the third book.

I love the idea of hearing both sides of the story. Action, romance, drama - this series has everything.

I can't believe some of the most amazing heartbreaking storytelling you will ever hear r.c Bray does a amazing job as always

a good sequel and looking forward to the other's . a little far stretched at the end but all good

This is the second book in the series and WHAT a series it is turning out to be.
Without giving any spoilers, the twists and turns are amazing and the book is written beautifully so that you are drawn into this new world.

As always, the story and characters are bought to life by the amazing talent that is R.C. Bray. It has been said that he would make a phone directory sound good, I believe it!!

Well done to author and narrator. Keep it up please!

The other side of the story, just as gripping as book one. All the pieces coming together.

great concept, story and narrating. I can't wait to listen to more of the series.