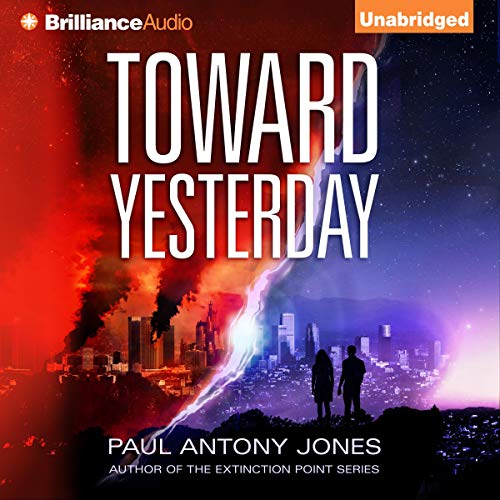 What would you do if you suddenly found yourself 25 years in the past? For the nine billion people living in the year 2042 it's no longer a question...it's a reality.

When a seemingly simple experiment goes disastrously wrong, James Baston finds himself stranded in the past alongside the rest of mankind. Here the old are young once more, the dead live again, and civilization is in chaos.

With the fate of humanity on the line, James must join a hastily assembled group of scientists, a reincarnated murder victim, and a genius trapped in her six-year-old body to reconcile the earlier mistakes of their future counterparts. The team struggles to prevent global extinction, and along the way they come face-to-face with their past losses, new loves, and a cold-blooded killer. As the team plummets toward a final confrontation, will they be able to undo time's unraveling in order to save the human race?

Revised edition: this edition of Toward Yesterday includes editorial revisions.

What listeners say about Toward Yesterday

The premise of this book is intriguing. However the delivery leaves much to be desired. Nearly 2/3 of the book is just describing the carnage going on around the main character in the same vein as The Scarlet Letter, painfully describing how the sunlight is bouncing off a blade of grass 3 different ways before moving on to the next long and drawn out description.

The time travel portion of the book is barely addressed at all, leaving many really interesting concepts unaddressed and unpursued by the storyline. While the last 45 min of the book finally picks up the pace, the ending left me unsatisfied with an interesting but largely unexplored resolution.

sorry but this is one of the worst book.

this book took more than half of its time setting up the story. the second half to describe every little detail that nothing to do with the story to fill space. then took a middle school science class
test question to say the smartest people in the world didn't get. dumb!! to the author back the overblown description and come up with more of a story

Can you check the time for me?

If you could sum up Toward Yesterday in three words, what would they be?

The original idea of the novel is at once standard fare done well ( a time leap ) and original ( what is the implications of the entire concept.) Very cool indeed!

Again, I come back to the central voice casting ideas. Consistent, clear and original. He does all three, and it grows on the listener. Well performed, and I will look for him in future offerings.

The moment when "the event" occurred was highly compelling and described in relentless and profound detail.

This audiobook was provided by the author, narrator, or publisher at no cost in exchange for an unbiased review courtesy of Audiobook Blast.

An excellent combination of author, idea and performance, this is a very unique book in the dystopian/timetravel category, and comes highly recommended.

Very early on New Year's Day of the year 2042 the people on earth find that the calendar has moved back 25 years to 2017. Most people are 25 years younger, many who died since 2017 were alive again, and people younger than 25 no longer existed. Creative contemporary sci-fi concept! The implementation is okay, but not as good as the concept. Overall Toward Yesterday is a worthwhile listen. It is made better by outstanding narration.

enjoyed the story line & its changing timelines. putting it all together as the story progresses must have been a writer's challenge. An excellant job & ending to possibly restart in another book

I enjoyed it. It's a good story and well thought-out. For me, it was little too short. I would have liked it to be extended with more details and more exploration of the characters.

This story lost me at times due to the basis in physics, which I barely passed in college. I finished the book regardless, due to the great storyline, characters and plausibility of the events. The narrator gave an excellent performance. I highly recommend this book.

So, some reviewers said they were lost from the beginning, some said they just hated it BUT I thoroughly enjoyed it. The players were great: Jim, Rebecca, Adrianna, Lorenz, Mabry, Mina, Simone and Lark.

Byron Portia made the story more interesting since he was a serial killer and Father Edward Pike was just insane. So there were all kinds of things going on besides working on how the “slip” happened and how to correct what had happened.

And I thought it was cool that everyone went back 25 years and one of the geniuses working at the lab had gone back to being her 12 year old self with all her knowledge intact, that was Adrianna. And one of the girls, Rebecca, that had been brought back to life was one of Byron’s victims.

There really was nothing boring or confusing about this book. I liked it. I don’t care what anyone says.

There was no sex, only fade-to-black and the F-bomb was used only ONCE. However, there were other swearwords.

As to the narration: Alexander Cendese did an awesome job on his voices and emotions.

This hooks itself out as a book. It's not. It's an introduction to a series. It's not bad with some good thinking but the sudden gotcha ending leaves a very sour taste.

What disappointed you about Toward Yesterday?

Did Alexander Cendese do a good job differentiating all the characters? How?

I thought the presentation was good, there was just not enough material to work with in this novel.

Time Slip Tale With A Difference

Another entertaining sci fi thriller from this author. He is excellent at reworking fairly standard themes into unexpected tales on a grand scale. He has a rare eye for detail which engages the listener all the more. The narrator is excellent. I have no hesitation recommending this book