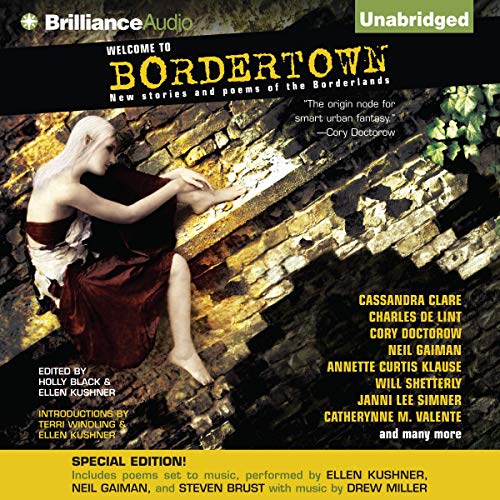 This Special Edition features original music by Drew Miller - including a fully-produced track of the song "Run Back Across the Border" by Steven Brust, with the author himself on lead vocals - and Neil Gaiman reading his own poem, "The Song of the Song."

What listeners say about Welcome to Bordertown: Special Edition

Where does Welcome to Bordertown: Special Edition rank among all the audiobooks you’ve listened to so far?

The level of performance of this group of short stories makes every individual story come alive. The songs are sung, the characters have appropriate voices and the effects are great.This is probably the best produced audiobook I have ever enjoyed.

This is a shared world anthology with a lot of authors and a lot of characters. I'm hard pressed to choose a favorite. Joey in "A Tangle of Green Men" by Charles de Lint because unlike most of the young folks who end up in Bordertown, we get to see him out in the World.

Damiana. telling her story in first person, in the reading of "Ours is the Prettiest" by Nalo Hopkinson is beautifully read in patois appropriate to the story. Jou’vert, is a Bordertown festival and this year's theme was "jazz funeral" so there were Catrionas and Egungun and other symbols of the dead.

In the story "Crossings" by Janni Lee Simner the two young street girls who manage to take Ye Olde Unicorn Trolley to Bordertown and the point of view of the narrator, Fig, are very moving.

The original Bordertown books were the harbinger of the Urban Fantasy genre. This fifth book has some of the original authors and younger authors who were inspired by the original series. It is truly an excellent addition to the canon.

This book dragged a lot.

This is one of the most slowest books I have ever read. It was really interesting in the beginning, but it just kept dragging on and on and on and there were many times where I just wanted to stop reading it. However, it was a really unique and interesting premise but I don't recommend it to people who get frustrated easily.