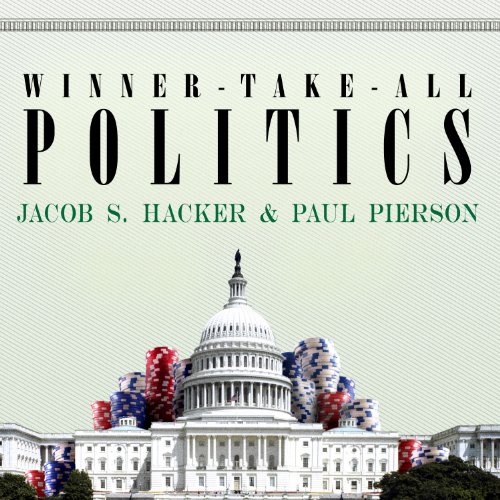 We all know that the very rich have gotten a lot richer these past few decades while most Americans haven't. In fact, the exorbitantly paid have continued to thrive during the current economic crisis, even as the rest of Americans have fallen behind. Why do the "have-it-alls" have so much more? Lots of so-called experts claim to have solved this great mystery, but no one has really gotten to the bottom of it---until now.

In their lively and provocative Winner-Take-All Politics, renowned political scientists Jacob S. Hacker and Paul Pierson demonstrate that the usual suspects---foreign trade and financial globalization, technological changes in the workplace, increased education at the top---are largely innocent of the charges against them. Instead, they indict an unlikely suspect and take us on an entertaining tour of the mountain of evidence against the culprit. The guilty party is American politics. Runaway inequality and the present economic crisis reflect what government has done to aid the rich and what it has not done to safeguard the interests of the middle class. The winner-take-all economy is primarily a result of winner-take-all politics.

Part revelatory history, part political analysis, part intellectual journey, Winner-Take-All Politics shows how a political system that traditionally has been responsive to the interests of the middle class has been hijacked by the super-rich. In doing so, it not only changes how we think about American politics, but also points the way to rebuilding a democracy that serves the interests of the many rather than just those of the wealthy few.

"Important.... The collapse of the American middle class and the huge transfer of wealth to the already wealthy is the biggest domestic story of our time."(Jonathan Alter, The New York Times Book Review)

I found this assessment of the politics of the past 30 years to be very insightful. The authors provide a great way of connecting assessment to examples. A must read (listen) for those who want to understand the gridlock in Washington. I am wondering if the Middle Class can survive.

To put it simply: a "must have"

This is a broad, thorough and scientifically backed analysis. Though sometimes shocking, the revelations are hard to argue with. With this book, Hacker and Pierson have given birth to a true masterpiece. If you are interested in politics, even if only remotely, you need this book.

It is so nice to find a piece of work that distills so many happenings, helps explain why things have changed and how narratives haven't changed but actions have.