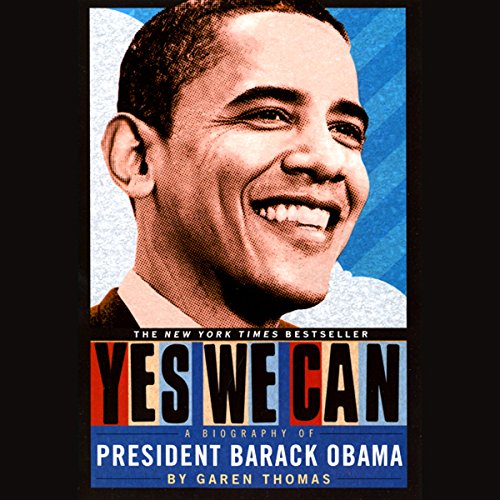 In third grade, Barack Obama wrote an essay entitled, "I Want to Become President" - and he is, to this day, determined to show the world that, yes, he can.

Born in the USA, the son of an African father and an American mother, a boy who spent his childhood in Indonesia and Hawaii, Barack Obama is truly a citizen of the world. His campaign for the presidency is powered by a fierce optimism, an exuberant sense of purpose and determination, and, above all, a belief that change can happen.

Garen Thomas takes us through the life of Barack Obama, from his struggle to fit in with his classmates and concern about not knowing his biological father, through his term as Illinois senator, to his historic and momentum-building run for president of the United States.

Barack Obama is a man who uses his words to inspire us. We can have a better future. We can be whatever we want to be. Yes. We. Can.

What listeners say about Yes We Can

What made the experience of listening to Yes We Can the most enjoyable?

This was a story which I knew the ending of because it is historical, but I appreciated the background information which showed a very ordinary fellow.

The scene of this future president of the United States having to sleep on the streets of New York. I said, "only in America."

Wrong Book in the wrong Place

Written in a very simple language!

Would you listen to Yes We Can again? Why?

Yes, I would listen to this book again not because it's intellectually challenging because it tells a story in a very simple way.

What was one of the most memorable moments of Yes We Can?

1. Obama at Harvard had planned a scene and refuse to go according to plan

2. His fight to not become what is expected of him; for example hang out with people of the same race.

Have you listened to any of Roscoe Orman’s other performances before? How does this one compare?

No I have not