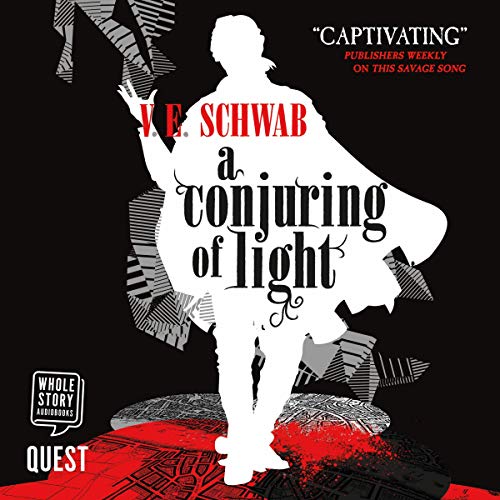 A Conjuring of Light

The precarious equilibrium among the four Londons has reached its breaking point. Once brimming with the red vivacity of magic, darkness casts a shadow over the Maresh Empire, leaving a space for another London to rise.

Kell begins to waver under the pressure of competing loyalties. Meanwhile, an ancient enemy returns to claim a crown and a fallen hero is desperate to save a decaying world.

“A Darker Shade of Magic is smart, funny and sexy...and Schwab keeps the excitement coming with roller-coaster plot twists that establish her as, perhaps, the natural successor to Diana Wynne Jones's contemporary fantasy crown.” (The Independent)

What listeners say about A Conjuring of Light

A wonderful trilogy that I’ll listen to again and again... as long as I can focus on the story and not the truly dreadful narration. There’s a red London, a grey London and a white London but no American London,so why use American narrators? To make matters worse, the two narrators make each of the characters sound completely different, which is ridiculous! Despite this, the story is absorbing and I will definitely listen to more from this author.

this book closes out the second book. but it would have been able to be in one book as they are not only the same series but the same story.

I read the first two but thought I would get the audio book of the third. I have no idea why they got two American narrators to do this book, found them both very irritating and will definitely not listen to anything they narrate from now on. Story was good but think I would have preferred the first book to be a standalone.

I loved this book when I read it but listening to the audio book means you hear every skilfully crafted word. It was a revelation. The real magic in this book is Schwab’s. Conjuring worlds conjuring people conjuring life.

My least favourite of the three

The performances were good, but I finished this book only because I felt like I had to, as I enjoyed the first two. Although I like the character development, this one dragged on a little too long for me.

I enjoyed it muchly. Quite a good series all in all. Would recommend it to people.

I very much enjoyed the series. All 3 books told a decent chunk of the story so no need to drag it out to 4 or 5 like some fantasy novelists. Author was new to me so I’ll try some more. The narrator wasn’t annoying to me so try the sample and see for yourself before letting that put you off.

perfect ending to a great series

Amazing narration from the duo who did the stormlight archives and the rest of the cosmere books.

The writing is incredible and the story is heart racing and captures your attention from start to finish. Another serues I'm sad to finish.

Couldn’t even get past the first chapter

What a horrible performance from the people reading the book . I’ve read the first two in the series and because I’ve been quite busy I decided to get e audiobook of the third to finish since I enjoyed the first two . I wish I wouldn’t have wasted a credit as I couldn’t even get past the first chapter , the terrible voice portrayals of 2 main characters in the first 10 minutes I just couldn’t carry on and let it be ruined . I turned it off and bought the kindle ebook instead . Truly
Awful narraters .

I hope one day I will get to see this series turn into a show.
everything about is magical, the characters and the world building.

Who chose American actors for a book set in London

The narrators accents were not only out of place (I'm sorry, Delilah Bard, a scruffy London thief voiced by a middle aged American lady??) but they also all do a poor job of reading, sounds convincing, or doing any other character voice. I ended up borrowing the actual book because I found the readers so annoying. read the book