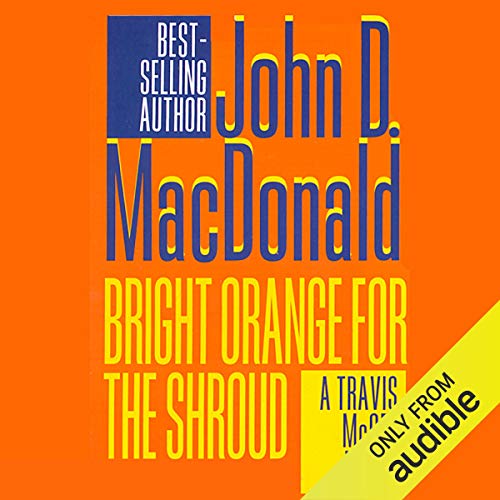 Bright Orange for the Shroud

Travis things he's in for a quiet summer until a walking zombie of a man, Arthur Wilkinson, stumbles aboard The Busted Flush. He's the latest victim of a fragile-looking blond sexpot who uses the blackest arts of love to lure unsuspecting suckers into a web of sordid schemes. Gone, suddenly, are the lazy, hazy days of summer as Travis becomes embroiled in one of the most dangerous, dirtiest cases of his career.

"[T]he great entertainer of our age, and a mesmerizing storyteller." (Stephen King)
"[M]y favorite novelist of all time." (Dean Koontz)
"[W]hat a joy that these timeless and treasured novels are available again." (Ed McBain)

John D MacDonald was an extremely prolific writer of mysteries and thrillers during the 50's through the mid 1980's. His popular Travis McGee series always placed a color in the title. Hence the Orange reference here. This story was copyrighted in 1965.

The value of this series is that it is written in its time with spot-on dialog, technology, prices, values, contemporary culture and morals. It was a wild and reckless time that this novel is set in. So essentially you have a master writer creating a novel in his time with a perfect pitch. Contrast this with contemporary writers trying to set crime novels in WWII, the 50's etc. and you get a story told through the prism of a 21st century writer, a big difference. People in the 1960's thought and acted quite differently.

The story is interesting, the characters developed and real. You care about all of them. John MacDonald takes the time to let you get to know the characters are real functioning people with strengths and weaknesses. He sets you down the pathway of the plot and you become an observer. The story reveals itself through logical, clever detection by Travis McGee, a stalwart knight that seeks to redress financial wrongs for a 50% cut of the recovery.

The story is set in the seedy Florida of the 1960's where land scams abounded and the innocent like the alligators were both skinned. This novel is crisply written, the run time on this Audible book is a little over 8 hours, just enough to tell a full story and not too much. The story unfolds fast. A feature of Travis McGee novels is that things work out in the end for the right people. So you find yourself cheering for the mistreated victim and share the redemption at the end. We have a first class villain and a cast of con-men that ring true. I place this series in the pantheon of historic crime masters like Dashiell Hammett, Raymond Chandler and Ross MacDonald (no relation) where perfect characters and plots are immortal.

What was one of the most memorable moments of Bright Orange for the Shroud?

It would be unfair to give up too much of the plot, but the search of the villain's property was a classic. McGee has a gift for the theatrical.

Excellent rendition of male and female characters. Good accents and a nice energy level to the reading. A very pleasant voice to have a story read to you.

Scams don't pay and beware of your spouse!

I read these all in print, then listened to them as abridged versions with Darrin McGavin narrating. Robert Petkoff is a fine narrator, but I miss McGavin. He caught the ironic quality of Travis McGee perfectly. However, he has passed away .... and Petkoff is good. Very good.

The story is classic MacDonald. There's lots of action, violence, sex, angst, and diatribes consisting of highly astute and unfortunately, very accurate observations of what we were then doing (and have now done!) to the ecology of the area. MacDonald was fanatical about ecology before it was fashionable.

Travis McGee is unique and most interesting: a violent man who abhors violence which sometime means that he hates himself, too. He kills, but he is ashamed of it and it brings him neither joy nor satisfaction. He cannot excuse his own guilt.

Travis McGee is complex and contradictory ... one of the great fictional "detectives" (he's not exactly a detective, by the way ... but it's as close as I can get to a one word descriptor).

You don't have to read them in order. However you read them, they are complete stories.

&quot;the most dangerous animal in the world is not the professional killer. It is the amateur.&quot;
- John D. MacDonald, Bright Orange for the Shroud

This is the first Travis Mcee novel I've read where I didnt' feel the need to reserve a star because his writing about women &amp; sex was so aweful. Just to be clear, the writing about women still left something to be desired. Every Travis McGee novel makes me imagine Burt Reynolds spanking some bikini wearing eye candy in some movie about cars, boats, or horses. I'm not saying Travis McGee = Burt Reynolds. No. I'm just trying convey the essense of the male/female in these novels. They are certainly not provincial, but they haven't yet made it to modern. But, briefly, in this novel, there was an almost mature, subtle, untangling of sex that was both real and (dare I say it?) beautiful. It is surprising to say that a writer that specializes in Florida pulp can still surprise me. I guess that is why I keep coming back to John D. MacDonald (I think this might now be my 10th JDMac novel). In 1965 he wrote perhaps one of the best, most honest, couple paragraphs about sex I've read (most sex writing sends me running for the hills).

Here is just a taste, a flirt, with what I'm talking about:

&quot;I was awake for a little while in the first gray of the false dawn, and heard the lovers. It was a sound so faint it was not actually a sound, more a rhythm sensed. It is a bed rhythm, strangely akin to a heartbeat, though softer. Whum-fa, whum-fa, whum-fa. As eternal, clinical, inevitable as the slow gallop of the heart itself. And as basic to the race, reaching from percale back to the pallet of dried grasses in the cave corner. A sound clean and true, a nastiness only to all those unfortunates who carry through their narrow days their own little hidden pools of nastiness, ready to spill it upon anything so real it frightens them. Heard even in its most shoddy context, as through the papery walls of a convention motel, this life-beat could be diminished not to evil but to a kind of pathos, because then it was an attempt at affirmation between strangers, a way to try to stop all the clocks, a way to try to say: I live.

The billions upon billions of lives which have come and gone, and that small fraction now walking the world, came of this life-pulse, and to deny it dignity would be to diminish the blood and need and purpose of the race, make us all bawdy clowns, thrusting and bumping away in a ludicrous heat, shamed by our own instinct.&quot;

Grateful to audible and you will be too!!

John D. MacDonald was one of our best crime story writers. Bright Orange for the Shroud is one of the best in the McGee series. It has it all-a classic revenge story, a villain that is worth the listen alone, a carefully told and skillfully developed novel with good old-fashioned edge of the seat suspense plus a series hero who's worth his weight in gold.. One of the better additions to Audible.

It is fun to spot the clues that this was written

a long time ago. No cell phones, a dime for a phone call, $40,000 buys a luxury home, being able to store items in the locker of a bus station for a week, $75 is an expensive hotel room, and so on.That said, Travis is a great character and each book just makes me a bigger fan.
The narrator is perfect. I hope he did all 21 books.

Another winner by John D. MacDonald and Robert Pet

Would you listen to Bright Orange for the Shroud again? Why?

I'd like to re-listen to all of these Travis McGee books. I'm on my fifth and will listen to them all, just like I read and re-read them years ago. ;o)

What other book might you compare Bright Orange for the Shroud to and why?

Well, of course, the other Travis McGee books in the series. This recording was delightful.

I loved all the scenes with Chookie and Arthur, and her sweet ways of helping him heal. She is a wonderful character.

Boo Waxwell was a wonderful, horrible villain. I loved the nastiness MacDonald created in this bad guy!

It feels like I just started reading this series. I read this one in late July and I am now on number 20. I'll be disappointed to finish but happy that I happened upon the series and will look to read other titles from the same author.

HOLY SH*T....I haven't even listened to this or read the novel yet, but I have been waiting for this day for two years! I discovered McGee 12 years ago during my teen years and never finished the series. When I became an Audible member I checked every two months to see if McDonald and McGee had docked the Flush on Audible.
Just got an email on my lunch break and downloaded Book 5 sitting in class. Can't wait to listen to it....I'm hoping Petkoff if awesome, but even if he isn't, MacDonald and McGee will make up for it.
Now just waiting for DiCaprio (or whoever) to find enough cojones to bring the big guy to the big screen.

Salvage of a psychologically destroyed man

Travis McGee takes on a salvage job for Arthur an acquaintance swindled out of all his net worth—$250.000. Arthur’s wife part of the confidence gang who robbed him.

The hero with feet of clay

The reader is carried along with Tab as he works to unravel a scam. I wonder if MacDonald himself had a bad experience investing in a real estate syndication. They are found everywhere in Florida. One gets to know all his characters well, sometimes to well. The tennis club characters was fun.
I particularly enjoyed his portrayal of Everglades City and the sportsman's club - a place I have been and which hasn't changed that much. On the other hand Marco Island is dramatically different.
That Trav wins out is as much because of persistence as due to all and insight.

Good, but not McGee's best

Enjoyed it, but a little too convex to be a five star. Would have preferred something where the plot was a little more straight forward. Still MUST FOR ALL McGee followers.

The best Travis McGee so far

The best Travis McGee so far. If you like Ian Fleming then this is for you. Tense and violence with characters that aren't stock pulp novel fare. Well worth a listen