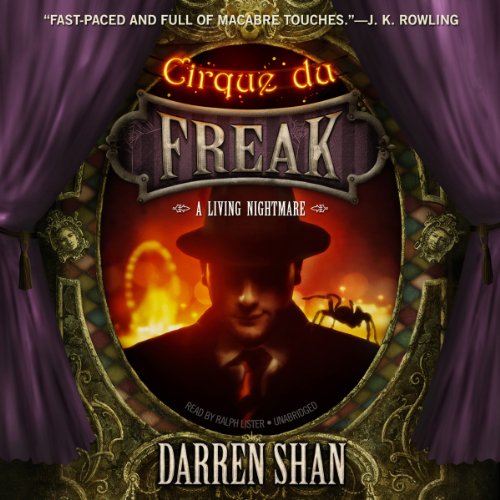 In the tradition of Ray Bradbury’s Something Wicked This Way Comes and Stephen King’s Salem’s Lot, New York Times best-seller Cirque du Freak is the first title in the popular Saga of Darren Shan series.

Darren Shan and his best friend, Steve, get tickets to the Cirque du Freak, a wonderfully gothic freak show featuring weird, frightening half human/half animals who interact terrifyingly with the audience. In the midst of the excitement, true terror raises its head when Steve recognizes that one of the performers - Mr. Crepsley - is a vampire!

Steve confronts the vampire after the show finishes - but his motives are surprising! In the shadows of a crumbling theater, a horrified Darren eavesdrops on his friend and the vampire, and is witness to a monstrous, disturbing plea. As if by destiny, Darren is pulled to Mr. Crepsley and what follows is his horrifying descent into the dark and bloody world of vampires.

This is Darren’s story.

Yes, I would recommend this to a friend because it's FREAKING AWESOME!!!!

What was one of the most memorable moments of Cirque du Freak: A Living Nightmare?

When Darren told us about the vacuum cleaner incident. :)

Peeps out there, you should listen to this!

I first got this book in grade 3, some 10 or so years ago and loved reading it. It really brings back great memories listening to it.

I admit, I hadn't heard of this till the movie

Often, the book is better than the movie, but the movie brings in people who'd never heard of the book. I am one of those. This book was great! The Narrator seemed to be a little old for the kid, but he was such a delight to listen to, I forgot about that quickly. I've gotten books two and three already. I listen to this on my way to work, and try to go the long way now, just so I can listen!

I really love this book I do perfer reading to listening so this was a differnt experince for me and very interesting bit I would love to go back and read this book myself because I love to sink myself into the story but this is nice when you are doing something and you want to read something.

Such a great introduction book!

Would you listen to Cirque du Freak: A Living Nightmare again? Why?

Yes. I loved the narrator, and I fully enjoyed this quick listen.

I liked the circus master. I can't remember his name, but he sounds so mysterious and creepy, but you want to know more.

What does Ralph Lister bring to the story that you wouldn’t experience if you just read the book?

I started reading it, but I decided to try the audio and I'm so glad I did. He adds an extra oomph of creepy.

I did, and I'm so glad I was able too, because I loved it so much.

This was the only book series I ever read when I was younger. It was so intriguing and mysterious I could never put it down. As the story progresses it gets better and better keeping you at the edge of your seat, it truly amazes me how Immersed I became the story just pulled me in I never wanted it to end...So I decided to visit it again and I’m not regretting it!

loved these books since i read them in middle school. enjoyed his reading of it. i was able to get lost in the story

I remember reading this back in middle school and loving it. I saw it and had to get it to see if it was as good as I remember it if it was really cheesy like the movie kind if made it. And I was pleasantly surprised how good it was! There was a lot I had forgotten that happened my first read, abd a lot that once it happened I remembered as it was happening.

this is definitely something I would recommend for something that's nice to listen to and has an interesting plot. There's no action and the actual vampire isn't in it too much, but it doesn't take away from the story since it is just building up to everything in this first book. Im excited to jump into the next one and see where it leads. I vaguely remembering the other books. I can't remember if I finished the series though

I love this series sooooo much!

this book is a mazing and the person the pick as a narrator even better !!!

My kids have to read this

Buying them all for kids. Why have I, an avid reader never heard of these? I loved it!

I am so excited to continue this series after this book. The story could trim a little fat and unessesery suspense slows down a otherwise fast paced and refreshing story. I can't say now, but it looks like this is a series I'll be reading for my kids one day, along with lotr and hp series. Give it a go!

loved it
great book and the narrator was fantastic throughout, cant wait to listen to the rest of them.

It really is a great book, readed it as a child and now listening to it again brings back so many good memories back. If you are in to fantasy stuff, this book is right for you!

Excellent reading and an even better story. I get to enjoy my beloved childhood again!

loved these books as a kid and as an adult they are still just as enjoyable :)

I have always taken a liking to darren shan from the demon saga. This book is definiatly the best so far, truely brilliant.

I love this book, I mean really love it, it is well read and keeps you on the edge of your seat.

Great narrator, entertaining story for all ages, I would recommend this. 10/10 would listen to again.

The Horror of my childhood!

This was absolutely excellent - I had the original audiobook cassette (narrated by Alan Cummings) as a kid and was so entranced that I read all 12 of the series and many of Shan’s other books. He is a master of imaginative horror. The narration of this was also excellent...however one small bone to pick - why did they Americanise it? Dollars, math, soccer. Seriously annoyed me and took me out of the story every time.

Far too short. The first trilogy should have been one book. Well read and a decent story but you'll feel short changed.

Great to listen to while falling asleep.

Disliked NOTHING! The reader wasn’t plain but he used expressions, voices and lots of other things.
Recommended to parents with young kids.
Wouldn’t change a thing.