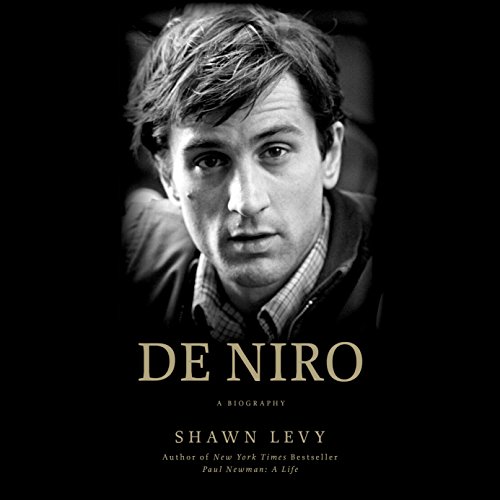 There's little debate that Robert De Niro is one of the greatest, if not the greatest, screen actors of his generation, perhaps of all time. His work, particularly in the first 20 years of his career, is unparalleled. Mean Streets, the Godfather Part II, Taxi Driver, the Deer Hunter, and Raging Bull all dazzled moviegoers and critics alike, displaying a talent the likes of which had rarely - if ever - been seen. De Niro become known for his deep involvement in his characters, assuming that role completely into his own life, resulting in extraordinary, chameleonic performances.

Yet little is known about the off-screen De Niro - he is an intensely private man, whose rare public appearances are often marked by inarticulateness and palpable awkwardness. It can be almost painful to watch at times, in powerful contrast to his confident movie personae.

In this elegant and compelling biography, best-selling writer Shawn Levy writes of these many De Niros - the characters and the man - seeking to understand the evolution of an actor who once dove deeply into his roles as if to hide his inner nature, and who now seemingly avoids acting challenges, taking roles which make few apparent demands on his overwhelming talent.

Levy has had unprecedented access to De Niro's personal research and production materials, creating a new impression of the effort that went into the actor's legendary performances. Levy also spoke to De Niro's collaborators and friends to depict De Niro's transition from an ambitious young man to a transfixing and enigmatic artist and cultural figure.

"An impressive biography that will surely stand as the definitive De Niro volume." ( Kirkus Reviews)

As meticulous as its subject

This is an exhaustive and thoughtful portrait of perhaps the greatest American actor of the latter 20th century. De Niro primarily focuses on the actor and his works moreso than the man, which given Robert De Niro's well-known reticence toward the media and interviews shouldn’t come as a surprise. Nevertheless, Levy has authoritatively researched his subject and seems to have gathered every possible quotable snippet RD has put on the record. What I particularly enjoyed about this bio was its critical take on its subject: Levy is not afraid to interpose his views in a balanced way on the actor's work as well as draw on other critics appraisals which makes this neither fawning nor a hatchet job. The end result is a bio that reveals the man primarily through his work, going in depth on his most iconic pictures and roles as well as collaborations with directors such as de Palma and Scorsese. In all, I found this very enjoyable, almost a companion to be read while either watching or reflecting on RDs movies. To this end, De Niro will appeal to film buffs as well those who want to understand the man in relation to the icon rather than those looking for a trashy tabloid take (though RD’s relationship with his artist father, his many spouses, children, and business enterprises are not glossed over). The breezy narration does not distract you from the material to the point I forgot I was listening to an audiobook. Well worth the read.

There was a lot of information about his life that I was not aware of....very enjoyable.

I found this most interesting. The details of each film made me want to go and get the DVDs and watch them again.

I will miss my reading, so I guess I will keep re-playing it so I could reinforce my learnings and great "behind the scenes" stories from some of my favorite movies, but above all, from one of my favorite actors ever. Thanks for making this happen Bob!!! Lorena

What did you love best about De Niro: A Life?

How thorough it was, as well as the fact that it remained unbiased. I loathe reading bio's that froth at the mouth over their subjects and gloss over their faults. Here you get De Niro, warts and all - but without the sensationalism that usually comes with a celebrity biography. It was tight and "Just the facts ma'am" without too much speculation or rhapsodizing.

The chronological flow re: movies De Niro was involved in and how he prepared for each role. How De Niro accumulated so many props and items for his wardrobe - each character added more clothes, hats and bric a brac!

Which character – as performed by Mark Deakins – was your favorite?

When he ferried food from his restaurant down the Hudson to ground zero after 9-11.

De Niro is one of my all time favorite actors and I was very worried of this being a hack job - but was pleasantly surprised - with the author and the narrator. Learning about where "You talking to me?" originated and how his friendship with Scorsese evolved, as well as the evolution of Tribeca, his work ethic etc was very rewarding for an avid fan such as myself!

This book is amazingly tedious, made all the more so by Mark Deakins' lugubrious reading that is so slow, it threatens to stop altogether at times.
De Niro is famously private and secretive. I still know little about him apart from the order of his films,which you can get in five minutes from IMDB.