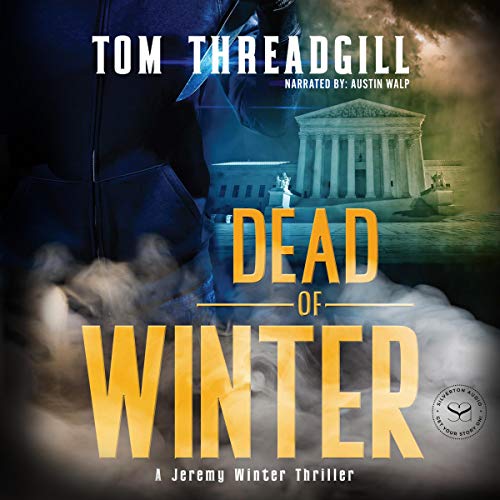 How far will he go to have his revenge?

When the fingers of dead women start showing up in the Supreme Court’s mail, ex-FBI Agent Jeremy Winter is brought back to the Bureau to aid in the investigation. Agent Maggie Keeley, his girlfriend and now boss, leads the search for the serial killer. Together, Jeremy and Maggie learn the five remaining cities on the murderer’s list, but they have no idea when the killer will strike or whom he will target.

When they stumble upon a clue at the scene of a young woman’s death, the case focuses on an abandoned ramshackle home in sparsely populated west Texas. As the FBI closes in, the ante is upped in ways no one could have imagined, forcing Jeremy to choose between justice and revenge.

What listeners say about Dead of Winter

A serial killer moves around the country murdering women and leaving petals from a daisy. In his sick and twisted mind he believes that he’s on a holy mission.
The protagonist, a former FBI agent, Jeremy Winter along with his girlfriend FBI agent Maggie Keeley track him but remain one step behind.
This is a pretty solid story with some nice twists turning this from a job for the agents into something personal. There is also some predictability but again I don’t think this took away from the story.
There is a continuing thread from book one that will continue into the next book. I would suggest listening to this series in order but each can be listened to as a stand alone.
HIGHLY RECOMMENDED.
If you found this review helpful please indicate so.
Thank You.

I purchased Dead of Winter (a Jeremy Winter series novel when it was released in December of 2019 and set it aside until yesterday. I continue to be impressed by author Tom Threadgill and will listen to Boo0k 3 in the series next.

If you're an east coast elitist you'll love the book

Well if you think the Bible is a fairytale and all Christians are morons then you'll love the book. If you think Walmart shoppers are stupids hicks and if you've ever been in a thrift store you're a redneck who buys smoke encrusted torn clothing then this is for you. I'm not talking about the views of the some of the main Characters - everyone feels that way in the book. Unless they're one of the Bible thumping hicks.

an awesome book that I never wanted to turn off. it's always enjoyable when it can keep you on the edge of your seat and you can't wait to turn it back on

A New Favorite Author to Add to my list!

This book is VERY well done! The twists and turns keep you engrossed in the book until the end!

Couldn't wait for it to be over. This is the second book in this series and was hoping it would be an improvement on the first.....it wasn't. This author is crossed off my list.

edge of your seat captivating

brilliantly written that keeps your interest peaked and tuned trying to go right along to do your own investigation of what happened. the plot, the twists, the suspense is captivating.

Overall a good story. The narrator was not so great. Monotone reading at times, not putting emphasis where needed and the way he said “thank” drove me nuts. I guess it’s a soft “th”. and noticeable because he said it at least 100 times.

Aside from likable characters, even the villain is complex in the way Norman Bates is complex, this is a pretty standard plot: retired government agent gets recalled to help catch/stop evil madman. There’s a beautiful wife/girlfriend/partner/femme fatale who finds herself the target of either the same villain or another. And a child, usually the agent’s, who is in mortal danger can be saved by only our hero. Nah, what I really enjoyed was the injection of humor here and there, running jokes, one liners, made this a very enjoyable listen. Though I did not like the narrator’s style as it was very stilted in the narrative parts, but fine during dialogues.

Serial killers and Jeremy Winter!!! A religious doing it for God serial killer is on the hunt Old Testament style and Jeremy is on his tail. However this time it is personal, too personal and in the end Jeremy may just lose what he treasures more than anything. Excellent cat and mouse thriller!

I read other reviews saying the narrator was robotic. I thought he was great, suited the story and characters plus you could hear everything he said clearly. I like there is another story running in the background and the main story believable, kept me engaged.

Just keep listening every spare minute. I look forward to the next book with Jeremy and his colleagues .

Enjoyed this book plenty of twists and turns with interesting characters. Had a number of stories within the main story.

Not horrific like “The Coming Of Winter”but still chilling and a good build of the story. The previous book helps to understand the politics and relationships. I enjoyed this book and the narration.