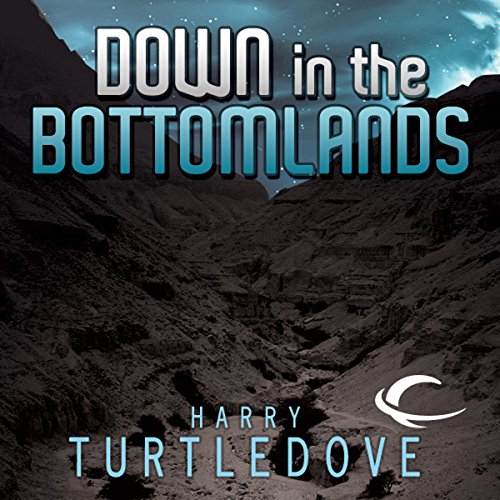 In the Hereditary Tyranny of Tartesh, what was once a vast sea basin is now a dried-out, unforgiving desert. When the kingdom's enemies try to shake down the Barrier Mountains and let the ocean in, Trench Park tour guide Radnal vez Krobir must stop them or be destroyed along with everything he holds dear.
©1993 Harry Turtledove (P)2008 Audible, Inc.

What listeners say about Down in the Bottomlands

Up With the Bottomlands

Harry Turtledove is a prolific practitioner of alternate history whose works tend to run to epic lengths across multiple volumes. He has also written some novellas along the way. Down in the Bottomlands is an example of the latter which may well serve, if you haven't previously read Turtledove, to whet your appetite for his more ambitious tomes.

The main historical alternative he considers here: What if the Mediterranean Sea had been cut off from the Atlantic Ocean millions of year ago and dried up into a vast hot desert basin well below sea level (the Bottomlands). The political map of this world has been redrawn, with Neanderthals having survived and evolved with intellect equal to homo sapiens from Africa, England and the Middle East.

The plot, centered around a biologist serving as tour guide in the Bottomlands to a group of various nationalities, unfolds quickly. Along the way, we learn about the fauna and flora of the Bottomlands, as well as the social structure this world's humans have imposed upon themselves. And, as is necessary for any good tale, the characters are well drawn, even in the limited word count of this short novel.

The net effect: I wanted more. I wanted to learn more about this world and its people and its geography and its biology. That is not a criticism -- I liked what I got and I wanted to learn more. I don't believe Turtledove ever revisited this particular creation in subsequent writings, so I will not get what I want. But he has plenty of other novels to delve into.

My only qualm: in audio format, it was hard to follow the strange names of the characters, countries, animals, etc., including words, particularly for measuring of time and space, invented for this book. I found a copy of the novella online that I used to familiarize myself with these words and names. That helped.

This has got to be one of the single dumbest sci-fi novels ever made. for god sakes learn from my misfortune and don't waste your credit/money on this ridiculous drivel.