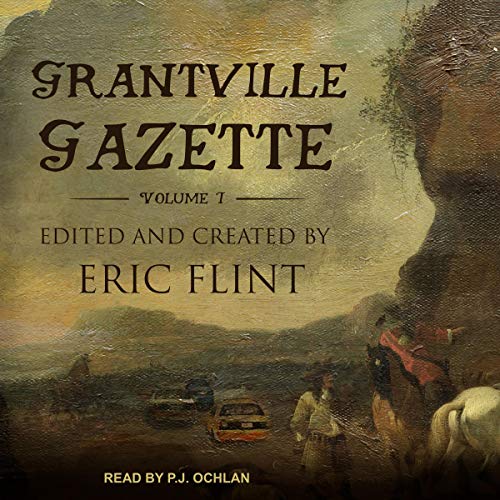 The new United States in central Germany launches a one-plane Doolittle Raid on Paris, France. The target: their arch-enemy, Cardinal Richelieu. Meanwhile, an ambassador from the Mughal Empire of northern India is being held captive in Austria by the Habsburg dynasty. Mike Stearns decides to send a mercenary company to rescue him, led by two 17th-century mercenary officers: an Englishman and a Irishman, who seem to spend as much time fighting each other as they do the enemy. Mike Spehar's "Collateral Damage" and Chris Weber's "The Company Men" are just two of the stories contained in this second volume of the Grantville Gazette. In other stories:

What listeners say about Grantville Gazette, Volume I

The legendary Gazette is now in audio

If you are a casual fan of 1632 you may not be aware that there is a quarterly that is up to over 80 volumes that is written to fill in the postulated world of the story arc. Professionally edited with writers who are not established beyound these volumes, getting into intimate details of the idea of 1632 with short stories, essays, serials and fact based articles. It is a treasure for wonks but is not light entertainment or fine literature. If you really like ROF and can't wait for the next main book in the series, this and the other 80+ volumes of trhe GG are a real treat.

Nothing stated in the Publisher's Summary that is appended to this.. this audiobook, is contained in the actual audio that got downloaded to my PC's audible app.

The actual short stories contained in the audio I dl'd, while not actually interesting to me to any great extent, were on par with most of everything else in the Ring of Fire universe in terms of quality story telling.
However it was not even close, to being as interesting as I figured that mentioned in the Publisher's summary would or could have been. Not to mention that parts if not even all of at least two of the shorts where regurgitations of prior books..

So I find myself rather annoyed having listened through 11 hours+ of stuff waiting for several stories that never came along so to say.. When horses started getting listed and described I figured I would skip that part getting on with the next short.. To my dismay there was less then 45 minutes left of the whole audiobook by then. Well at least I got a nice long nap in during the piece about Piatza going to some religious conference.

If your are in this far, you are probably, already, irretrievably, too far gone. Congratulations!

Love the stories. One of the best voices!

The stories may partially be for the big fans. For those who loves very-low-profile sci-fi, and are absolutely hooked on history, science, practical engineering in a lower-resource world with positve attitude inhabitants (not overblown hype), and how culturally related people can interface with each other. (The non-results of culturally removed people we have seen enough of to have any inspiring or facinating aspects for me anymore.)
But the really, really great thing here is the voice of P.J. Ochlan. Too many readers sound amazing for the first seconds, then they are mostly sleep inducing; or are grating from the start. P.J. Ochland is great. From this audio book I have replayed stories at least two or three times even before I have finshed them all. (I guess I'm saving the best story for a really long road trip.) (I have the book too. I read that first, and bought the audiobook as an addition a month later.)