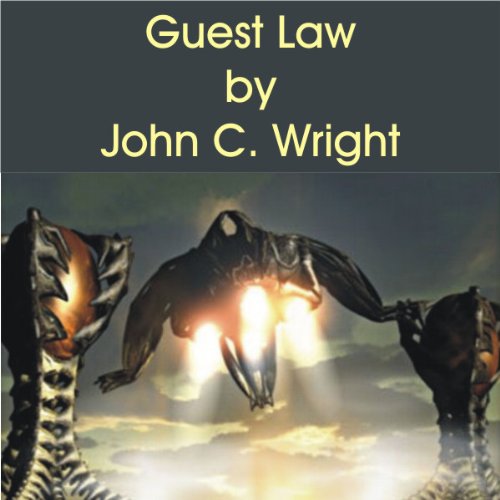 There be pirates in the vast void of space! Does not the poet say: "Beware the strangeness of the stranger. Unknown things bring unknown danger?" The noble ship Procrustes was silent as a ghost. Warships can be silent if they are slow; only their missiles need speed. And so it was silently, slowly, that the Procrustes approached the stranger's cold vessel.
©1997 John C Wright (P)2008 AudioText

What listeners say about Guest Law

A short but excellent tale in the vein of Heinlein, enjoyable in its own native role of yarn, but also serving quite admirably as a thought experiment on the nature of man. Another serving of the Wright stuff!

Guest Law’s version of the future is not only fantastic, it is insightful. If mankind was expelled from earth and forced to live among the stars in interstellar vessels and habitats then of course those self-contained bastions of life would be vassal states. Human society would likely progress along the same lines as it did after the fall of the Roman Empire. It would start from small pockets of civilization, feudal societies, which, to survive the prowling barbarians and Viking raiders, would be bound by honor, right, and custom. Civilization would arise in the great expanse of space through feudal ships with passengers bound to their vassal lord, the starship captain. Those bound to fight for the ship’s survival and honor would be granted nobility, with codes of hospitality and chivalry to ensure they remained civil despite their power. Over time, you might regain the Pax Romana, but on a galactic scale it will take a great deal of time, and a very strong sword.

That Wright creates this backdrop without pedantic exposition, but through vivid story telling, and short story telling at that, is truly remarkable. That Guest Law is one of Wright’s earliest stories is proof of his mastery of the genre.

Dheere's performance is exceptional. I listened to it again the next day, and will listen to it again soon.

In the hands of a master

Audible, why don't we have more written by John C Wright?

I don't want to give away the plot because it really would spoil the journey in this case. Mr. Wright weaves tightly in this short piece. It is Space Opera. It is not space battles and sword fights in spacesuits. The setting is distant future, far flung in space and time.

It will take you someplace unexpected while being more rational about the nature of space and the nature of humans than 99% of sci-fi or fantasy. (I mention fantasy not because there is any in this story but because that is where you may have found other books by this author.)

Final clue: The author is a master of mythology. Here there is a flavor of Eastern mythology. It could be compared to early works of CJ Cherryh.

Loved the story. Plausible look at future cultures, some of the (moral!) challenges they will face, and a possible solution.