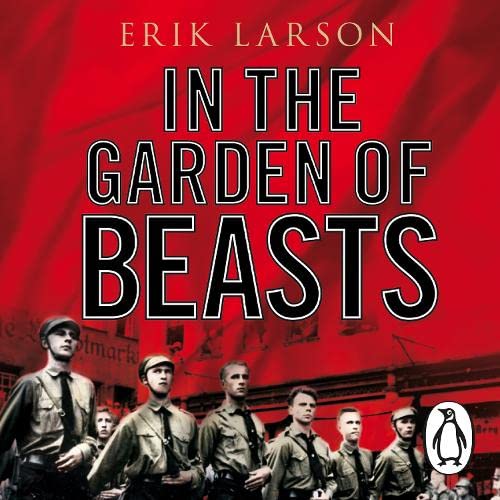 In the Garden of Beasts

Berlin, 1933. William E. Dodd, a mild-mannered academic from Chicago, has, to his own and everyone else's surprise, become America's first ambassador to Hitler's Germany in a year that proves to be a turning point in history. Dodd and his family, most notably his vivacious daughter, Martha, observe at first-hand the many changes - some subtle, some disturbing, and some horrifically violent - that signal Hitler's consolidation of power.

Dodd has little choice but to associate with key figures in the Nazi party, and his increasingly concerned cables make little impact on an indifferent U.S. State Department. Meanwhile, Martha is drawn to the Nazis and their vision of a "New Germany". She has a succession of affairs with senior party players, including first chief of the Gestapo, Rudolf Diels. But as the year darkens, Dodd and his daughter find their lives transformed, and any last illusions they might have about Hitler are shattered in the summer of 1934 by the violence of the "Night of the Long Knives" that established him as supreme dictator.

Suffused with the tense atmosphere of the times, and with brilliant portraits of Hitler, Goebbels, Goering, and Himmler, amongst others, Erik Larson's new book sheds unique light on events as they unfold. The result is an unforgettable, addictively readable work of narrative history.

What listeners say about In the Garden of Beasts

As a general third Reich student, I expected a normal history. How wrong I was. This read to me like a novel and I kept checking historical sources. Mr. Larson has achieved a unique blend, to me, of history in a novel style - the pun is apt. I listened to it over a couple of days and was enchanted by his achievement. The narrator is ok - he has a few lapses of pronunciation.
Listen to the book, it is different, and I hope you enjoy it. Ambassador Dodds was a breath of fresh air and well before his time. His Jewish views are misguided, reflecting an attitude prevalent in Europe and the USA, which I deplore.
[I have been an audible member for many, many years: this is my first review. I am 70 (in 6 days!’]

You can always tell when a man has written a woman

This book felt really old fashioned including the narration. The descriptions and comments about the women made me cringe, it felt really dated. All the women were described in terms of looks and I felt there was an undertone of judgement about how Martha behaves. It gave a few interesting insights into Nazi Germany but not as many as I had hoped.

I loved this book, it's a quiet one for sure but I loved it. The subjects are fairly ordinary people in an extraordinary time, Dodd is an understated, unassuming and in many ways unremarkable character thrust into a terrible time in history struggling to make an impact on what seems even at the time to be inevitable.

Before reading this book is never really had an appreciation of the complexities and absolute fear faced by members of Hitler's government such as Papen, Diels and Hanfstaengel. Larson does a good job of portraying the quiet horror that sits across the entire government and the seemingly bizarre lack of recognition of what's happening from those outside of Germany.

Superb story by a great Author

Superb story of the dangerous world of love and terror in pre-war Nazi Berlin written by Erik Larsson the best creative non-fiction writer around!

A beautifully written, and powerful story.