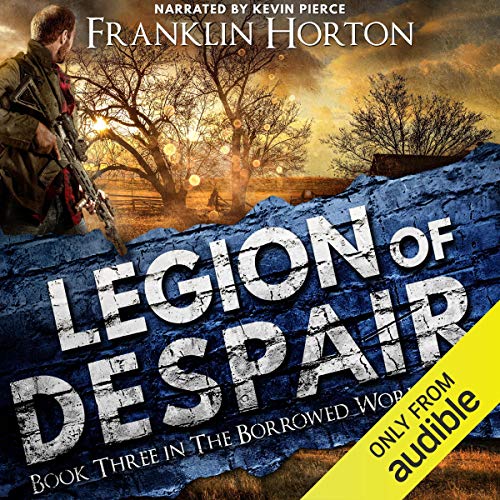 In his best-selling novels, The Borrowed World and Ashes of the Unspeakable, Franklin Horton showed us a nation facing societal collapse from a coordinated ISIS attack on the American infrastructure. Most of the country is without power, communication, and fuel. As a result of the attack, a group of business travelers in Virginia found themselves among the millions stranded on the highways with no idea how they would be getting home.

In this third installment, Legion of Despair, the country is teetering on the brink of anarchy. While one of the stranded travelers, Jim Powell, made it home and is working to establish a safe, sustainable enclave for his family, his co-workers Gary and Alice are not faring as well. After spending hundreds of painful miles dreaming of his reunion with his family, Gary arrives home only to find his family under attack. Now he must face the painful decision as to whether his family's plan to bug-in is viable or whether they may need greater numbers and a better location to survive in this collapsing nation.

While Gary's homecoming is bittersweet, he has at least found his way into the arms of his family. His co-worker, Alice, has awakened on the cold, concrete floor of a basement in Bluefield, Virginia. She is bound and chained to a support column. She doesn't know if she will ever see her son or husband again. All she knows for certain is that the man in front of her has already brutally killed her friend, Rebecca, and unless she finds a way out, he will kill her, too.

What listeners say about Legion of Despair

IT'S A SELFISH WORLD

A HOUSE COULD BE REBUILT, A FAMILY COULD NOT
I have touted Horton's talent in several reviews and refer to him as the go to apocalypse (without zombies) writer. This is a good book and is better than the best of others, but I will admit I did not enjoy this book as much as the first two. Part of that is because the main character is Gary, not Jim. Gary is just not as interesting. It also took a long time for me to get invested in this story. The action scenes, just did not seem as intense as in the first two books. It is still worth four stars and I will continue the series.

THE TRAIL LED TO THE PUBLIC HOUSING DEVELOPMENT
Horton is political, but no where near as strong as other authors in this field. His political tidbits are few and far between, but they are still there. In previous books, he has belittled those who live in trailer houses. In this book, the trouble makers come from Public Housing and apartments. We are told that all moped drivers are people who lost their license, due to DUI's. Maybe true, I don't know. I found it ironic that we are told only druggies, break into buildings and steal. We are told this as Gary is using a stolen key to break into a building and steal a government owned box truck. In the process, they tare the place up when they steal a fork lift they don't know how to operate. I find this a constant in these books, it is always awful when others break into houses, steal cars, steal food, steal gas, but when the main character does these things, that is Okie Dokie.

Pierce
Pierce has an authoritative voice which demands respect. He is the king of these type of books, because he is the best..

I'm living these books, I was a little hard on the very first book in the beginning, just because it seemed as if the women in this story were depicted as helpless, and beyond naïve, but through the rest of the book, and the following two, it got a lot better!! I've been a Tom boy my whole life, I've taken self defense classes, I own a lot of guns, and I've been nick named anne because I'm a very good shot. So I appreciate it when woman in books are not afraid to fight back!! and not just be victims. These are good and very realistic I feel, on how bad things would get if our infrastructure collapsed. I also found it interesting because the story start off with the main characters being far away from their home when S.H.T.F
I have often thought about that very same scenario because I am a long haul truck driver. I live on the west coast but drive to the east coast every week. This book series has given me a lot more to think about. You won't be disappointed.

STORY GETS BETTER AND BETTER!!!

Would you consider the audio edition of Legion of Despair to be better than the print version?

Always is, but I only listened!

That we get to see how the others are doing now...and how they are all coming together in one way or another!

Which character – as performed by Kevin Pierce – was your favorite?

I LOVE THIS SERIES AND CANT WAIT FOR #4!!!! In this installment we get to see how everyone is doing...Alice escapes, mostly unscathed...but the situation all around is dangerous for them all!!

GREAT ADDITION TO THE SERIES! I RECOMMEND!! LOVE THE NARRATOR TOO!!!

Another great book from Franklin Horton

What made the experience of listening to Legion of Despair the most enjoyable?

Kevin Pierce is a great narrator. He captures the characters and brings them to life.

Franklin Horton is a great writer and I always look forward to his new releases. Actually, his books are the only ones I have listened to more than once. This book does not disappoint. The story remains off the standard story line for this genre and provides the reader with fresh scenes not typical of the other books/stories in the apocalypse scenarios.

I highly recommend reading the entire series. As you read a series you always take a chance on the stories quality dropping off after a while. I have not found this to happen with Horton's books and can't wait for his next installment.

I highly recommend the whole Borrowed World Series, but this third book is a step above. Twists and turns and suspense with nice character development. The story moves along nicely and ended way too soon. This narrator doesn't vary voices for each character much, yet he is enjoyable and pleasant. He's One of my favorites and I've listened to some of his other narrations as well. So now I wait for book four which won't come soon enough for me.

This book delivers from the start. I was not disappointed at all. Just when you think your safe, the book adds a twist that you don't see coming. Excellent work Franklin and wonderful job narrating Kevin.

Would you listen to Legion of Despair again? Why?

What was one of the most memorable moments of Legion of Despair?

Gary trying to get his family out of harms way

Which character – as performed by Kevin Pierce – was your favorite?

Tough to decide, but for this title it has to be Gary

I can feel the desperation of the characters as they try to escape Hell, leaving all that they love behind, to keep family safe. Giving up their houses that they feel are everything they have, so hard, but so necessary!

much darker than others

In order to continue story , the author seemed to be reaching for dialogue and trying to implant dark subject matter. least favorite of series.

I've read the entire series plus locker nine. no loose ends. great choice in the narrator.

A dynamic storyline continues and leaves you ready

Would you consider the audio edition of Legion of Despair to be better than the print version?

I can not judge as I do not read books, never have . I know some folks are avid readers some even voracious! I am in my 50s a TV addict since childhood. I have become an Audible addict in the last two years and have bought around 50 books so far. What I can tell
you is I love being in the moment when the action happens and when the narrator nails that most climatic point in the story. I enjoy being able to jump in my Tahoe and Bugging out of Reality for even a lunch break.

What other book might you compare Legion of Despair to and why?

Devil Dog by Boyd Craven III, great characters driven to great lengths of heartache pain and despair trying to reach that ever elusive point refuge in the SHTF storm.

What does Kevin Pierce bring to the story that you wouldn’t experience if you just read the book?

Kevin is great at bringing the characters to life for you, he gives them their personality as the author has created it. I find his voice realistic and not computerish sounding, and you can certainly feel his care for the story line,not just another lets read and get this shit over with.

I listen on the way to work, during lunch break, on the way to appointments, in between times with my grand kids, and before bed! You see I'm listening! You authors out there are wonderful, I try to be fare on my reviews and I apologize if I go over board about narrators
but I only listen, so it is important as Hell that you choose the right narrator , I now Kevin can't do them all and I am trying to be more open to others, but I will be quite frank with ya'll
yes I am a damn red neck Texan! If I can not bare the Voice, Then your book will not be my Choice! Its simple I only listen. Thank you to all authors it takes guts to set down and create
stories from thin air and place them for the world to judge, to love, to hate, and even to praise.

Just about to buy book 4.

I loved this book, a fantastic read, absolutely riveting, and kept the momentum going from the first two book. I received this book in exchange for my honest review.

These books are getting better and better! This one was full of dark action and surprises. I didn't want to go to sleep!

A story well worth listingto, It has the finess and quality to portray the type of person we all would like to be placed in the same circumstances.

Can't out this series down. The plot is great and the characters become like your own family. out of the last 200 books I've read in the last 2 years this series is up there with the top 3. Perfect choice of narrator who adds hugely to the feel of the characters.

Good read easy to follow about ordinary people trying to survive and succeed in a new world. Relatable and believable