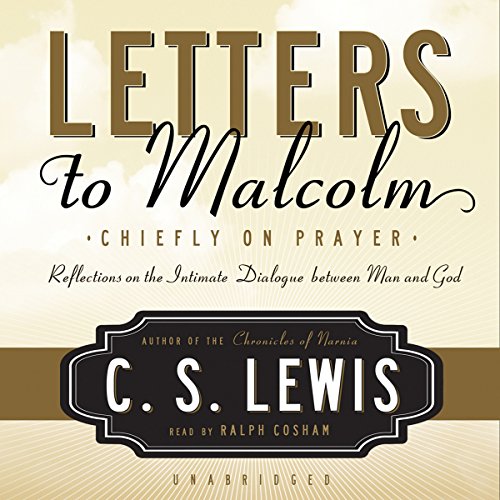 In the form of warm, relaxed letters to a close friend, C. S. Lewis meditates on many puzzling questions concerning the intimate dialogue between man and God. He considers practical and metaphysical aspects of prayer, such as when we pray and where. He questions why we seek to inform God in our prayers if he is omniscient, whether there is an ideal form of prayer, and which of our many selves we show to God while praying. The concluding letter contains provocative thoughts about “liberal Christians,” the soul, and resurrection.

Clive Staples Lewis (1898 - 1963) was one of the intellectual giants of the 20th century and arguably the most influential Christian writer of his day. His major contributions in literary criticism, children’s literature, fantasy literature, and popular theology brought him international renown and acclaim. He wrote more than 30 books, and his works continue to attract thousands of new readers every year. His most distinguished and popular accomplishments include the Chronicles of Narnia, Out of the Silent Planet, The Screwtape Letters, and Mere Christianity.

“If wit, and wisdom, style and scholarship are requisites…Mr. Lewis will be among the angels.” ( The New Yorker)
“A beautifully executed and deeply moving little book.” ( Saturday Review)

What listeners say about Letters to Malcolm: Chiefly on Prayer

One of my favs.

Lewis challenges the height and depth of orthodoxy. This is another if his expansive works. “Broaden your mind, Malcolm. Broaden your mind.” This line from the book is the essence of what I mean. If you love Christ and His communion then Lewis can help you in the journey.

Nice to hear with British accent

What made the experience of listening to Letters to Malcolm: Chiefly on Prayer the most enjoyable?

Letters to Malcolm is my favorite C.S. Lewis book. I enjoyed hearing it read to me. This was the last book Lewis prepared for publishing. To my mind, it is his most personal. I looked among his friends to find Malcolm only to learn that he is a composite of friends Lewis had.

I thought the reader spoke a bit fast and often without much inflection. Still, I will listen to it again.

What did you love best about Letters to Malcolm: Chiefly on Prayer?

It's as if the reader is eves-dropping on a personal conversation between Lewis and his correspondent. At times I wondered what Lewis would think of his personal correspondence being published.

It was refreshing & engaging.

Ralph is consistently good. For me, he has become the voice of CS Lewis.

However, if you have read many of his other works then you will find this final book a more thoughtful debate on what the act of prayer is or could be. There are gray areas in our faith and Lewis helps us contemplate what that means in our daily contemplative life.

He is a man of substance. After reading him, I have the feeling that I have dropped by his home and enjoyed yet another deep discussion with a good friend. He brings up differences in thinking as a way to examine what is useful in describing prayer. CS Lewis is a man who thinks before he speaks, and we can feel how he doesn’t want to waste our time. He gently leads us to profound insights that are intended to better our own lives.

I believe he wrote this last book not to leave a legacy behind, but to help us in our own spiritual walk with God. It was his last act of love to us. This alone is a good first reason to read this book.

I have a better understanding of prayer.

What did you love best about Letters to Malcolm: Chiefly on Prayer?

The personal touch. I had a real sense of the character of C.S. Lewis. What a remarkable thinker he is. I laughed, smiled, reflected, determined to be more fervent in prayer, and listen to this audible a few more times.

A friendship between two men who respected each other and loved each other though they differed in their understanding of God. It was refreshing to see two men

Which character – as performed by Ralph Cosham – was your favorite?

The time when C.S. Lewis talked of Malcolm's son and they joked about his future and then the boy was possibly in dire straights. The words of comfort C.S. Lewis gave were moving.

Reading or listening to the writing of C.S. Lewis makes me want to read all that he wrote. I am not totally clear on all that was spoken in the audio but his intellect is far above mine. Still I glean much from what I hear. Thanks for making this an audible.

This is a second reading of Letters to Malcolm.

As I was reading it, I confirmed that Letters to Malcolm is probably my favorite of Lewis’ books. I am not sure many others think so, several reviews on Goodreads think it is one of his weaker popular books. But like Paul’s II Timothy, there are hints of real humanness here that give me great joy.

Letters to Malcolm is a fictionalized set of letters that Lewis writes as if to a close friend. It was Lewis’ last book to be published while he was alive, about 6 months before his death. And while it is fiction, it feels like real letters. There are side notes and personal details. You can feel his age and some loss of freedom because of his health. (I was convinced these were real when I read them the first time.)

At the same time this is not a book that is completely easy to read. There is only one side of the letters. Malcolm’s letters are not included so we only know the response through Lewis’ side. Some of the letters are light and simple, some are pretty dense and dealing with heavy problems.

It is always surprising how relevant and distant Lewis can be at the same time. The early section about potential changes to the Anglican Liturgy and hymns could with a few word changes be written today. The section on spontaneous and written and wordless prayers is very helpful to think about. It is not only insightful, but wise. Lewis wants to make sure that choices that one makes, are not binding (or restrictive) for others. And Lewis wants to make sure Malcolm understands that not only are different people going to have different mixes of prayers, but throughout our life, it is likely that we will desire and need different types of prayer.

The discussion of George leads to a poignant section on comfort of friends. Lewis talks about his loss of his wife Joy and how difficult it is to give and receive comfort.

This is a book that I am pretty sure I am going to come back and read a third time. There is too much wisdom to absorb all at once.

Though C.S. Lewis speaks in terms that aren't common to the English language of today, he still brings intelligent insight into prayer and all its many facets. His dialogue between himself and Malcolm is very entertaining, a reflection of conversations between friends. I definitely recommend Letters to Malcolm for a different approach to a theological topic from a logical perspective.

OK, but not one of his best.

Probably not. This is a collection of letters that he wrote to a friend, and while there are some good moments, I didn't find it particularly helpful.

What other book might you compare Letters to Malcolm: Chiefly on Prayer to and why?

What does Ralph Cosham bring to the story that you wouldn’t experience if you just read the book?

The saving grace of this book was the narrator's performance.

Not really. My favorite part was when he said that he wished that ministers would remember that the Lord said Feed my flock, not Experiment with my rats. I've had that feeling before, myself.

For fans of C.S. Lewis' non-fiction works, this is not the best choice. I found it somewhat dry compared to his other works, but then again, this is a collection of letters - not a book that he wrote for a larger audience.

There are traces of his sense of humor here and there, but the style is far less entertaining and made less of an impression on me than other works of his that I have read.

This is almost a theological (study of God) book, but it doesn't really make it to that category. Neither is it a mentoring or encouraging book on prayer, it's more about complaints he had about the service at his church and problems he has with his friend's (Malcolm's) opinions on theology.

I love C.S. Lewis! He always makes me think more deeply and practically about my faith and view of God. I will have to read this again.

Like most of C.S. Lewis' prose writings, this will have to be one that I read, and re-read again and again. Not only because it was a joy to go through, but because so much of it is way over my head... When I hear him say somethings my first response is usually, "Yes! That is totally it! THAT makes sense!" But could not repeat it to you until I ran through it about fourteen times more. His writing is clear and concise, but his ideas complex and weighty. They are sort of hard for me to really absorb into my own patterns of thinking.
But still, I was inspired, encouraged, and marveled at the way that Lewis seamlessly connects things that I never would have seen together before. He inspired me to pray, to talk to my friends about God and prayer, and to cultivate humility toward God and my fellow man.

C.S.Lewis. Always one of the very best.

Would you listen to Letters to Malcolm: Chiefly on Prayer again? Why?

I always find CSL inspired work to be fascinating and worthy of many repeated listening. There's always something to reconsider, ponder and memorise.