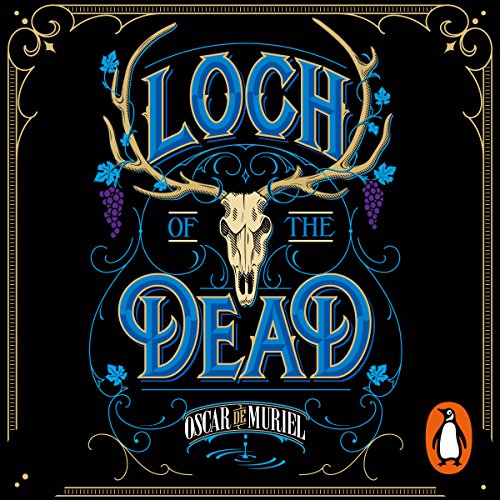 Loch of the Dead

A mysterious woman pleads for the help of Inspectors Frey and 'Nine-Nails' McGray. Her son, illegitimate scion of the Koloman family, has received an anonymous death threat - right after learning he is to inherit the best part of a vast wine-producing estate.

In exchange for their protection, she offers McGray the ultimate cure for his sister, who has been locked in an insane asylum after brutally murdering their parents: the miraculous waters that spring in a small island in the remote Loch Maree. The island has been a sacred burial ground since the time of the druids, but the legends around it will turn out to be much darker than McGray could have expected.

Death and increasingly bizarre happenings will intermingle throughout this trip to the Highlands, before Frey and McGray learn a terrible truth.

"I enjoyed this - properly creepy and Gothic." (Ian Rankin)

What listeners say about Loch of the Dead

Not one of his best

This is still worth a listen, but I didn't think it was the best of the series. Things got just a little too silly, and some of the detail at the end seemed a trifle spurious. Nevertheless, I still enjoyed the book overall, and Andy Secombe was very good, as usual.
The main characters seems to be mellowing and are starting to show a little fondness for each other, this would be understanding in a long working relationship, but it lessens the vitriolic barbs that were very funny.

What an excellent surprise

I can’t remember how I came about buying this audible book but I’m glad I did! I have listened to it almost non stop over about 4 days and thoroughly enjoyed it.
I have listened to and enjoyed all the M.R.C. Kasasian books and I love a Victorian mystery/crime novel with good characters and this didn’t disappoint.
I also didn’t realise this was the 4th in the series when I downloaded it and started listening but it didn’t detract from the pleasure and I have now downloaded book 1 as well.
My only complaint would be as other reviewers have mentioned which is the somewhat dubious Scottish accents and the very overdone deeply gruff accent of McGrey. However as the book went on I became less irritated as I became more involved with the story. Totally loved his narration of Frey and uncle Morris but not so much of the Scottish women who definitely sounded like Scottish men more often than not!
In general it’s a great listen and I’m pleased to say spent another credit on book 1!

The accent was hard to handle

I've enjoyed reading the earlier books in this series, but decided to get this one as an audio book. I won't be doing that again. The narrator's Scottish accents were just too over the top. Maybe I was more sensitive to it because I am Scottish but it was seriously annoying at times.

A great follow up to an excellent series of books

A family curse, the desire to cure this curse, and to keep this cure from others, is our main storyline in this book. Treachery, family secrets, double crossing, misdirection, taboos, and murder. Everything you could want in a crime novel.

I should make it clear that my review is based on the unabridged audiobook, so some of my comments might not be relevant to the paperback or Kindle version. However, the only comment on the narrator is that you can clearly tell when one day’s recording ends and the next begins – his voice drops an octave or so over the day. Then when he starts the next day’s recording his voice is much higher and fresher. His range of accents and emphasis is excellent.

Like most of the Frey & McGray books The Loch of the Dead feels just ever slightly too slow to get going, we spend longer than is necessary setting up storylines before we get to the action of the main plot. Whilst it is fun that the story is set outside of Edinburgh it loses a little something in the process too, it feels slightly more dislocated than the preceding books. By only having the manor and islands to use as the backdrop some of the atmosphere is lost, particularly with the constant use of shadows and darkness in the house. This is an interesting motif, but gets a little tiresome after a while, there are only so many ways you can describe darkness.

The use of piano playing to set the mood is a clever idea that I enjoyed, it became as if the book had its own soundtrack built in, playing only in your mind. Oscar’s love and knowledge of music is again clear. It is however a shame there are none of the usual background characters who add some of the extra flavour, like Madame Katerina. We do meet Frey’s uncle but he seems rather one-dimensional, besides one revelation that is interesting but adds nothing to Frey’s overall backstory.

There are spoilers from this point on.

The family is suffering from a ‘curse’ that can only be cured by drinking human blood. It’s a fabulous storyline that flows excellently. A curse that follows families down through history, driving them mad, ruining their bodies, and leaving them in never ending pain. Those who also enjoy medical books may be spotting that this is in reality the inherited condition Porphyria, first discovered and described in the period The Loch of the Dead is set in – McGray certainly learned a lot in his very short time at medical school. Porphyria can indeed be alleviated (although never cured) by being injected with Haematin, a compound made by synthesising haemoglobin found in blood.

This is a brilliant move by Oscar de Muriel, and his symptoms fit; burning in sunlight, mental illness, stomach or abdominal pain, seizures, and weak bodies that look like the undead (some believe Porphyria was the original cause of the vampire myth).

Also, whilst Benjamin’s storyline is interesting it does feel slightly underdeveloped, as does McGray’s sister’s storyline. The only other negative is that the ending is slightly too long, it drags out for a few more chapters than is needed.

I love this series, historical fiction with a supernatural flavour is a winning combination for me and I found this , the fourth book in the series very entertaining and interesting ( from a scientific point of view )

I didn't have an affinity to this book as the others. still worth reading in the series. characters still as funny and performance still as brilliant.

I stumbled on these stories and have been slowly drawn into this gothic world.

This is the best - and most surprising - take yet. I was truly shocked at the ending and had to turn it off while I was driving! I love the relationship between the protagonists which is vividly brought to life by excellent narration.

Twists, turns, mists and mayhem. It's all here. Gray and McGray are led a not so merry dance in the wild depths of Scotland. Personal tragedy will strike for one, personal danger stalks them both.
A great story that kept me hooked to the end.
* Although this story will stand alone, I recommend that the series be read in order.

This narrator should be compelled to sit through this entire book with a set of headphones on and he would realize just how ridiculous this is . Another complete waste of money .

more twists than a rollercoaster

really enjoy this series. dark, comedic, great narration and characterisation. think there are two narrators as voice changed a bit in a couple of chapters. Gripping story and clever plots .