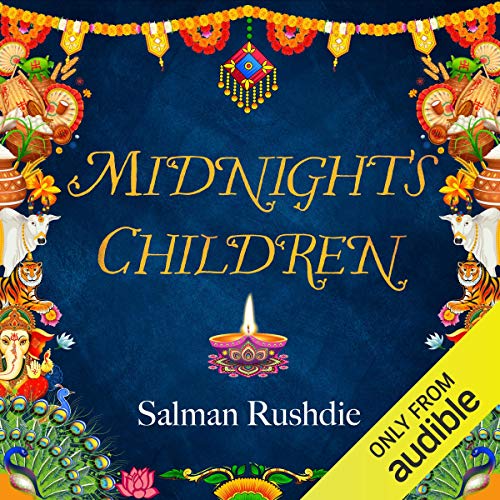 This Audible production expertly brings to life Salman Rushdie’s postcolonial masterpiece Midnight’s Children, available for the first time unabridged in audio. A magical tale of discovery and identity, Midnight’s Children explores the wonders and perils of India’s birth through the eyes and actions of a child blessed with extraordinary powers.

Salman Rushdie’s second novel, Midnight’s Children, was an immediate success following its publication in 1981. The winner of both the Booker Prize and the James Tait Black Memorial Prize that year, it also went on to win the Booker best all-time prize in both 1993 and 2008.

Written in the magical-realist style that Rushdie is renowned for, Midnight’s Children follows Saleem Sinai - a child gifted with extraordinary powers after being born at the exact moment India becomes independent. The captivating events that unfold act as an allegory for India’s transition from colonialism to independence as Saleem finds himself 'handcuffed to history', with his fate entwined with that of his newly independent state.

Midnight’s Children is both comedy and tragedy, blending the real with the surreal as an enthralling family saga unwinds against the backdrop of a postcolonial India. A stunning story, rich with vibrant images and delightful characters, it thoroughly deserves its place as a modern masterpiece and an inspiration for a whole generation of future Indian writers.

One of the most celebrated and controversial authors in modern literature, Salman Rushdie is a multi-award-winning British Indian novelist whose writings on magical realism and postcolonialism have inspired and enchanted millions of people around the world. Born in Bombay in 1947, his early years were spent in India before moving to England and eventually reading history at King's College, University of Cambridge.

Rushdie first gained fame following the publication of his second novel, Midnight’s Children, but it was the publication of his fourth book, The Satanic Verses, that resulted in global notoriety. Iran’s Ayatollah Khomeini issued a fatwa against him which resulted in death threats and the banning of the book in 13 countries. A winner of dozens of the highest awards in literature, Rushdie was also the recipient of a knighthood in the UK in 2007.

What listeners say about Midnight's Children

For a book set in the Indian Subcontinent why choose a narrator who cannot pronunce any Indian words. Words like Ganesh, Dupatta or Lata in Lata Mangeshkar are pronounced wrong. And the accents, oh the accents, terrible. Midnight's children is one of the best books I've read and this audio book does a disservice to that book.

uninteresting, stretched and not so well connected

I personally didn't like it much, although I finished it the same. No one strong theme runs through the story. The dots have been connected in a very artificial manner. Of course I can be wrong and might evaluate or understand the novel in a different light some other time.

The book is good but the recitation of secondary character is irritating and spoils the fun.

The novel has some merits but it's not equal to the damage caused by the narrator. Audible took no care choosing this one.

a good write by an expert storyteller

Salman keeps the glue intact in his this fiction book. expertly written in easy language and comparing history with his own unique style of satire. Homer Todiwala has done justice to the story by his excellent narrative voice and caricature.

A book to read as well as listen

Absolutely fascinating narrative that jogs your imagination and creative impulses. I fell in love with his writing style and the way he weaves in bits of historical significance in his own way. - Arvind Passey - Blog: www.passey.info

An extremely disappointing book and production

A terrible, disappointing, uninteresting storyline which is totally ungripping in every way. Started this book only because of the name-fame of the author and what a complete waste of time it was, getting only worse as the story progresses.

It is neither a political period story, or a social tale, nor a philosophy, nor even properly thoughtfully constructed language . Apart from one sentence in the whole book ( "... they have partitioned time..."), it is just a huge forcefully constructed jumble of every thing, which resembles a big mess. Nothing more.

The production quality was so poor with bad and wrong pronounciations of Hindi words and overly dramatised. artificially enacted accent for quotes, that it made your head hurt. Totally uncharacteristic of what would be expected from a brand like Audible.

The audio version failed to engage.

Poor narration of Indian words. Besides the story is not well connected. Books fail to engage the story.

Midnight's Children is a famously hard to complete book. I didn't find the book particularly difficult back in the day but I'm unlikely to go past the second chapter on the audio book.

A good narrator can make a terrible book worthwhile (see Will Wheaton) but a bad narrator can ruin a great book. Homer's misprouncing of Indian places and names would have been bad enough, but when he puts on a grating 'Indian' accent it's the last straw.


While on Homers , as an Indian, let's just say I found Hank Azaria as Apu a more convincing approximation of how Indians sound to the irredeemable awfulness of the narration here.

I really cannot go ahead with this book because of how bad the narration is.

The story is riveting. Each character sharply etched, each description vivid. A beautiful, rich tapestry.
I personally didn't like the narrator's pronunciation of certain Hindi/Urdu words, they seem foreign the way he says them. I cringed each time I heard Parvati, Nadir, Kasim, but that could be just me. Other than this, the performance was pretty good.

My first Rushdie...now I understand why he is in the haloed circles. Great style, tempo, and a cutting sense of humour. A must read for the style of bombayyia and Indian English captured so well.

What a fantastical brain that dreamt up this incredible journey of a book! I am in awe and feel like I've come across literary genius for the first time in my life. informative and spellbinding!

What a boringly meandering dull dirge.

After just over an hour, I’m giving up. The basic concept sounded good, & it’s a prize winner and controversial so had to be worth a try. But it’s so rambling, repetitive & boring that I keep drifting off. I can’t face another 23 hours of this. Maybe I’ll try the 4-hour BBC radio play.

Good book, maybe not as an audiobook

I enjoyed the plot however I don’t think that the nature of the writing works well as an audiobook. I frequently found it difficult to follow, even when rewinding and repeating passages. I intend to read the book properly to see if this improves it.

This is not a criticism of the reading, which was good.

This book really was a struggle, saved only by the superb narration. The storyline is all over the place and very difficult to follow, even with reading the Shmoop summaries after each chapter. I persevered hoping that at some point I would get to grips with what was going on but it never came. Unsure if this is actually something really clever and I’m just not able to understand it... or a load of absolute rubbish? Certainly one or the other.

I was disappointed with this story. I’ve read other stories by salman Rushdie “ Haroun and the sea of stories” and “ Grimus” which I found wonderfully engaging. I really couldn’t get into this one and didn’t get past the first few chapters.

Nearly gave up early on. some great moments but somehow overblown and pretentious at times too.
Good narration.

A struggle to readwith no cohesive aspect to the narrative at all. Very difficult to understand overall.

Exceptional Narration of a beautiful story

I have taken to seeking out more books narrated by Homer Todiwala - his reading of this magical book made it the best audiobook i've come across. This is the second book i've read by Rushdie, I am not surprised that it was such a wonderful story. Strange, complex, political, wry, heartbroken, arresting and deeply moving.

Listened to the bbc adaptation a while back and always wanted to hear the full book by audio.....so glad I purchased this....Rushdie is a brilliant writer, so much humour and dazzling pictures he has left in my head ....cheers man....I loved it again and again.

Rushdie's style is unique - the narrative is very colourful and a bit all over the place. Some will probably find it very entertaining while others frustrating. The book starts out quite slow and you will have to keep going quite a while before the book even starts to focus on its main character. About a third into the book it gets better though and anyone with any interest in Indian history will appreciate how the story connects to historical events. Reading is good and expressionate.

After listening to Midnight's Children I resolved to read the book to relive the beauty of Rushdie's writing and storytelling, and to learn more about the history of India, Pakistan and Bangladesh from the period in which it's set.

nothing short of brilliant 👏

in true sushdie style, this work is a triumph of storytelling. may we all live to see the blue Kashmir of his dreams.

This book is profoundly poetic and paints a beautiful canvas of Indian society right before and after independence. Key historical events are presented in flow of interweaving fantasy and reality while convening it’s message in a symbolic way. Even if you can follow the plot. You’ll still get it in the end.

I loved this book. So dense and complex and funny. So much craziness and wild imagery. I was sad when I arrived at the end.

didnt have the attention span for it

this book and dune i both struggled to follow as audio books. not sure why, maybe the foreign names and places, surely its my fault not the author or narrator. i read the wikipedia on the book after finishing. it does sound interesting maybe I'll revisit as a tangible book one day.

I read this book because it was voted the best of

I read this book because it was voted the best of the last thirty years. I was not disappointed and along with the Satanic verses is well worth the time and dedication required to truly appreciate.

I feel that this is probably better read in book format. I found the story and some of the characters hard to follow and ended up fading in and out of the story and losing interest. I enjoyed some parts and the vivid imagery and persevered to the end but overall this book was not for me.

Have no idea how it ends