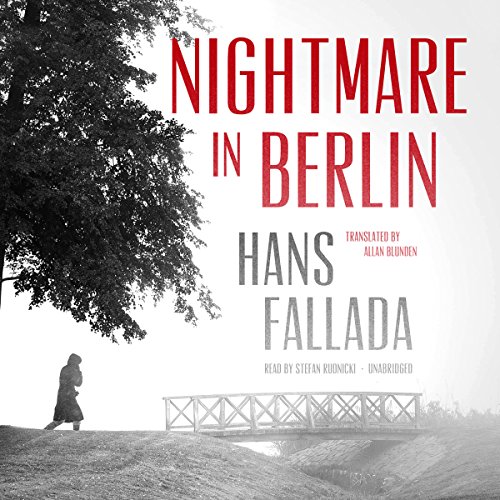 Available for the first time in English, here is an unforgettable novel about the desolation of postwar Germany after Hitler.

The war is over, yet Dr. Doll, a loner and "moderate pessimist", lives in constant fear. By night, he is still haunted by nightmarish images of the bombsite in which he is trapped - he, and the rest of Germany. More than anything, he wishes to vanquish the demon of collective guilt, but he is unable to right any wrongs, especially in his position as mayor of a small town in northeast Germany that has been occupied by the Red Army.

Dr. Doll flees this place for Berlin, where he finds escape in a morphine addiction: each dose is a "small death." He tries to make his way in the chaos of a city torn apart by war, accompanied by his young wife, who shares his addiction. Fighting to save two lives, he tentatively begins to believe in a better future.

Nightmare in Berlin captures the demoralized and desperate atmosphere of postwar Germany in a way that has never been matched or surpassed.

What listeners say about Nightmare in Berlin

I really enjoyed this book. I also read Alone in Berlin which I liked, but felt Nightmare in Berlin captured me more. The characters are richly developed . The novel really captures the mood at the end of the war. I’ve never encountered a book or movie that deals with this period and was fascinated with the authors vivid descriptions. I wish he had lived longer to write more. Truly a gifted talented writer !

Could not understand the words he was saying. Voice was so deep. Didn’t get beyond the 1st chapter. Sorry don’t know what the story was

Unable to listen to the narration


I not able to rate this story as I was unable to listen to it. I tried for two hours but could not connect with the narrator...

Germany after the defeat

This book took us for 4 hours between dallas and Austin. We did not stop for lunch.

Fallada narrates his life after the war in this quasi-biography, as well the life of all Germans especially those that never recognize that they were Nazis either in the big towns or in the small villages
a critique of German society and the human condition, the same narrative repeats over and over again in Syria in the Balkan, in Vietnam.
I have previously read “we all die alone” but this one is great, but without showing the Nelum neighborhoods.
Narrator creates Great voices for each one of the characters really bring into life many of the characteristics that fallada describes.

awful ,because the narrator is unacceptable .
The historical record is rich and compelling but this audible presentation fails to deliver.

Optimism after a war

The story is not bad, very interesting but sometimes slow.. The German soul after the war, their thoughts, their fears, their beliefs.. Fallada describes them well. The narrator makes the listening tough at times, but overall was good.