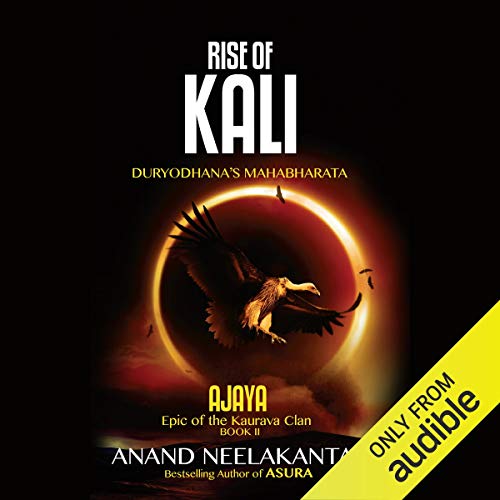 The Mahabharata endures as the great epic of India.

While Jaya is the story of the Pandavas, told from the perspective of the victors of Kurukshetra, Ajaya is the tale of the Kauravas, who were decimated to the last man.

From the pen of the author who gave voice to Ravana in the national best seller Asura comes the riveting narrative which compels us to question the truth behind the Mahabharata.

The dark age of Kali is rising, and every man and woman must choose between duty and conscience, honour and shame, life and death....

The Pandavas, banished to the forest following the disastrous games of dice, return to Hastinapura. Draupadi has vowed not to bind her hair till she washes it in the blood of the Kauravas. Karna must choose between loyalty and gratitude, friend and Guru. Aswathama undertakes a perilous mission to the mountains of Gandhara, in search of the Evil One. Kunti must decide between her firstborn and her other sons. Guru Drona has to stand with either his favourite disciple or his beloved son. Balarama, having failed to convince his brother about the adharma of violence, walks the streets of Bharatavarsha, spreading the message of peace. Ekalavya is called to make the ultimate sacrifice to uphold a woman’s honour. Jara, the beggar, sings of Krishna’s love while his blind dog, Dharma, follows. Shakuni can almost see the realization of his dream to destroy India.

As the Pandavas stake their claim to the Hastinapura throne, the Kaurava Crown Prince, Suyodhana, rises to challenge Krishna. As great minds debate dharma and adharma, power hungry men prepare for an apocalyptic war. The women, highborn and humble, helplessly watch the unfolding disaster with deep foreboding. And greedy merchants and unscrupulous priests lie in wait like vultures. Both sides know that beyond the agony and carnage, the winner will take all. But even as gods conspire and men’s destinies unfold, a far greater truth awaits.

What listeners say about Rise of Kali

Shake your beliefs to the core.

This book will Shake your beliefs to the core and reinstall new belief system in you which is better version of your previous self. this book is more than Mahabharata. This book is about life and the Black/Grey/White Area of it. After completing this book - My heart was filled with contentment and at the same time it was feeling empty, My heart was coming out from my chest and at the same time it was more stable then ever in my chest. This book opens a completely new dimension to your beliefs, emotions and life. Heart is a organ of emotions it will change. I am kind of person who always supported both side in Mahabharata.. it has shaken my belief itself. you can image the impact you will have when you were supporting only pandvas. This book has shaken my belief system on Krishna, destroyed it and reinstalled it. You will go through a hard phase if you are a Krishna Bhakt. The new beilef that no one is perfect and everyone has their own flaws. Even god themselves commit mistakes in the heat of the moment but graceful accept the fruit of the karma, that's what make them great. I promise it has changed me for better and I can't type all that. it's a different feeling.

the book is the excellent depecit of Mahabharat. The author Anand Neelakantan is to the next level. The performance I give 100000000/10. It's a excellent performance - outstanding, marvellous and fantastic. It's the best audio performance till date I heard. Siddhanta Pinto must perform more books. I wish to see 100's of books under his performance in Audible. Thank you Audible for the amazing experience. Thanks a lot. You will definitely need a lot of self control to stop listening to it once you start this book. you just can't stop listening to it.

Yet another master class

Makes you rethink what you know about the great Saga.

The two part series is worth the listen !

An excellent (re)interpretation of the great epic

A story that leaves you with more questions than answers, but in the process opens you to new perspectives and attention to nuances.

loved it..for what it is, experience the bliss by listening to it. good narrative as well. a detailed narration of another side of the coin(mahabharata)

Great details in the story.
There is always a story from the other side.
Dharma for Pandavas is following lord Krishna
Dharma for Karuvas is abiding to the rules of war and fighting with moral code.
Good insights to the mind to provoke a new dimension to think about.

One of the best books on (how we can perceive) mythology. though contradicting our beliefs until date, this book makes us ponder about the "villain's paradigm"

A must read for any book lover...

Loved it! Food for thought indeed.
Narration was also very good👍An all together new experience... thinking from suyodhan's point of view! ah see I have already started saying suyodhan!

the book succeeded in projecting Duryodhan as a righteous man who committed one blunder, and a victim of circumstances
really thought provoking

Siddhanta pinto, brought the story to life with his performance. love the view point of the author....
whole narration without twisting the plot or the communication of the great saint Vyasa...

This is an exceptional way to know Mahabharata from the other side.

This is an exceptional way to know Mahabharata from the other side. I always baffled at the “varnashankar jayate “ concert raises by Krishna in 2nd chapter of Bhagvad Gita, but was never imagined the possibilities of caste system of that time. This book had raised many valid questions on the concept of Dharma as its is imposed on us. Well done author and narrator. Kudos.

This novel is nothing about the actual Mahabharata

All the characters (including lord Krishna) were shown as if they’re behind power and women. This book will definitely hurt people’s feelings. The author also targeted certain castes and communities so harshly. A person would believe this story and start showing hatred towards bharat if they’ve no knowledge of Mahabharata before.

This is a masterpiece. A brilliant retelling of a vast epic. I am sure that even a person unfamiliar with the Mahabharata will find the story compelling. As a person familiar with Vyasa’s epic, I am amazed with the subtlety the author uses to blur the lines of propriety, of dharma and adharma.